Militants launch over 200 missiles in the “hotspot” areas, in other areas militants now  attack Ukrainian positions 24/7 while a popular militant leader dies in a blast.

Kyiv, October 17, 2016. The most difficult situation is in the Mariupol sector. The situation in Mariinka – Krasnohorivka frontline area remains the most restless. Militants launched 225 missiles from heavy armor at Ukrainian positions and residential quarters in 90 minutes. Eight buildings were damaged in Mariinka, five of them residential.mThe situation is the same in Talakivka – Shyrokyne frontline area. Lebedynske sustained the biggest damages yesterday, as several hundred mines and shells were launched at the town, said the spokesman of the Ministry of Defense of Ukraine on ATO related issues Colonel Andriy Lysenko at a press briefing at Ukraine Crisis Media Center. “Caliber of heavy armor used by militants is 82-152 mm. Enemy’s tactics is total ruin of inhabited localities and our strongholds in this frontline area which would facilitate further militants’ aggressive actions on the “burned land”,” he said. 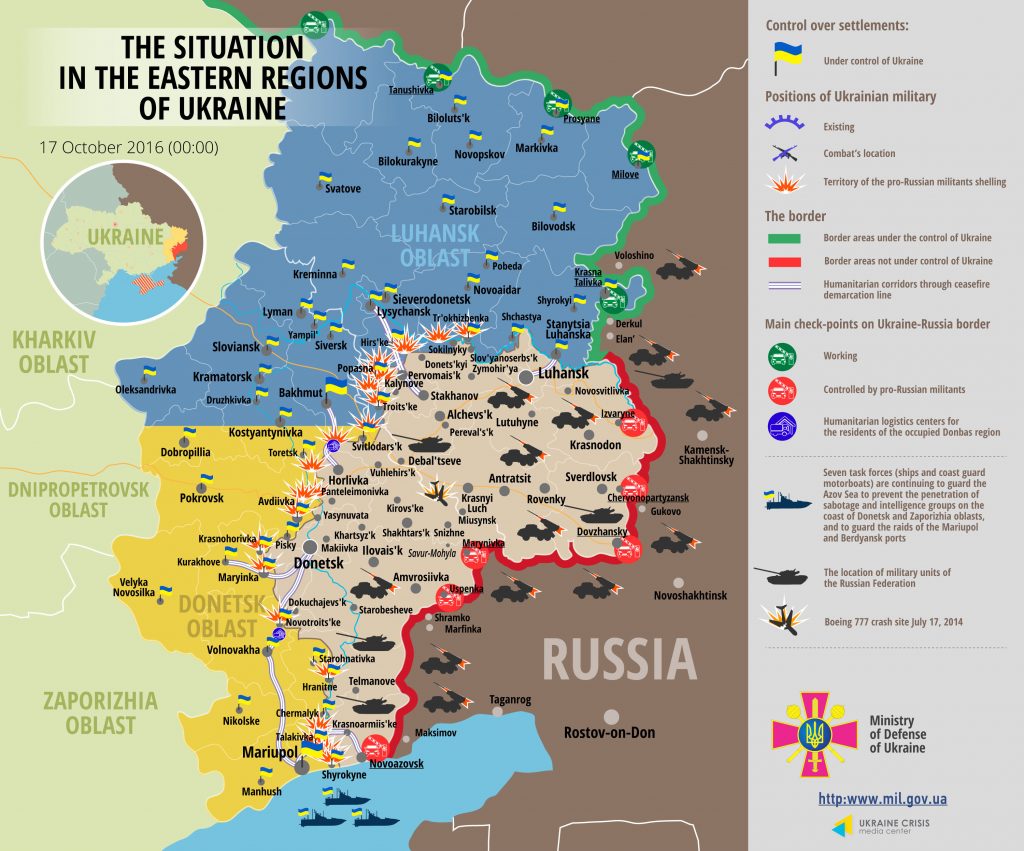 According to the spokesman, militants attacked in Novotroitske, Hranitne and Pavlopil. In total, 23 militants’ attacks took place in this sector and 15 of them involved use of heavy armor. Moreover, six flights of militants’ unmanned aerial vehicles were registered. Ukrainian troops destroyed two of these drones.
Col.  Lysenko also informed that militants deployed additional artillery subdivisions at the frontline and intensified attacks at Ukrainian positions in the Popasna district.
Combat activity in this area gradually change to 24/7 mode. The enemy is shooting from heavy armor from two directions – east (Pervomaisk) and south-east (Kalynove). Furthermore, artillery batteries of large caliber are deployed on the second line near Irmino and Stakhaniv,” said the spokesman. According to him, militants are opening fire from mortar launchers and cannons during the hours of darkness, using small weapons the rest of the day. They launched approximately 120 missiles at Ukrainian positions. Militants conducted two mortar attacks in Krymske. In total, 29 militants’ attacks took place in the Luhansk sector, and 13 of them involved use of heavy armor. “Troitske incurred the biggest number of attacks, as the enemy launched 10 mortar shells and 10 missiles at our positions there. Moreover, the adversary used mortar launchers in Luhanske, Novhorodske, Verkhniotoretske and the Avdiivka industrial area,” explained Col. Lysenko.
In total, militants conducted nine attacks in the Donetsk sector, and five of them involved use of heavy armor.
One Ukrainian serviceman died in combat yesterday and seven were wounded.
The spokesman said that another batch of reinforcement came for militants from Russia. These were six tanks with combustible and lubrication materials and two railroad cars with unidentified freight. 12 units of armor came to Ilovaisk station and 11 tanks with combustible and lubrication materials arrived at Luhansk.
Col. Lysenko informed that a notorious militants’ commander, a Russian citizen Arsen Pavlov with nomme de guerre ‘Motorola’ died in Donetsk yesterday night as a result of a blast in an elevator of a residential building. “Pavlov did not occupy any high commander positions in militants’ hierarchy, as the command consists of Russian officers. He was mostly known as a “PR-militant” decorated with dozens of “awards”. It made common militants furious, as this war had brought them nothing but poverty and injuries,” said the spokesman. He reminded that ‘Motorola’ will be remembered for his inhuman cruelty and looting. He is responsible for a number of military crimes, namely murdering a defenseless Ukrainian prisoner, a Donetsk airport defender, the Hero of Ukraine Ihor Branovytskyi.