October 23, 2016. Ukrainian Armed Forces incurred no losses in combat yesterday, although two troops were injured, informed the spokesman of the Ministry of Defense of Ukraine on ATO related issues Colonel Andriy Lysenko at a press briefing at Ukraine Crisis Media Center.

Three militants’ attacks took place in the Luhansk sector yesterday, two of them involved use of heavy armor.  There were no hostilities in two main flashpoints – Stanytsia Luhanska and Popasna areas. Russia-backed militants violated the armistice in Krymske where two mortar attacks took place. Moreover, there were attacks in Novotoshkivske in the Bakhmut road. 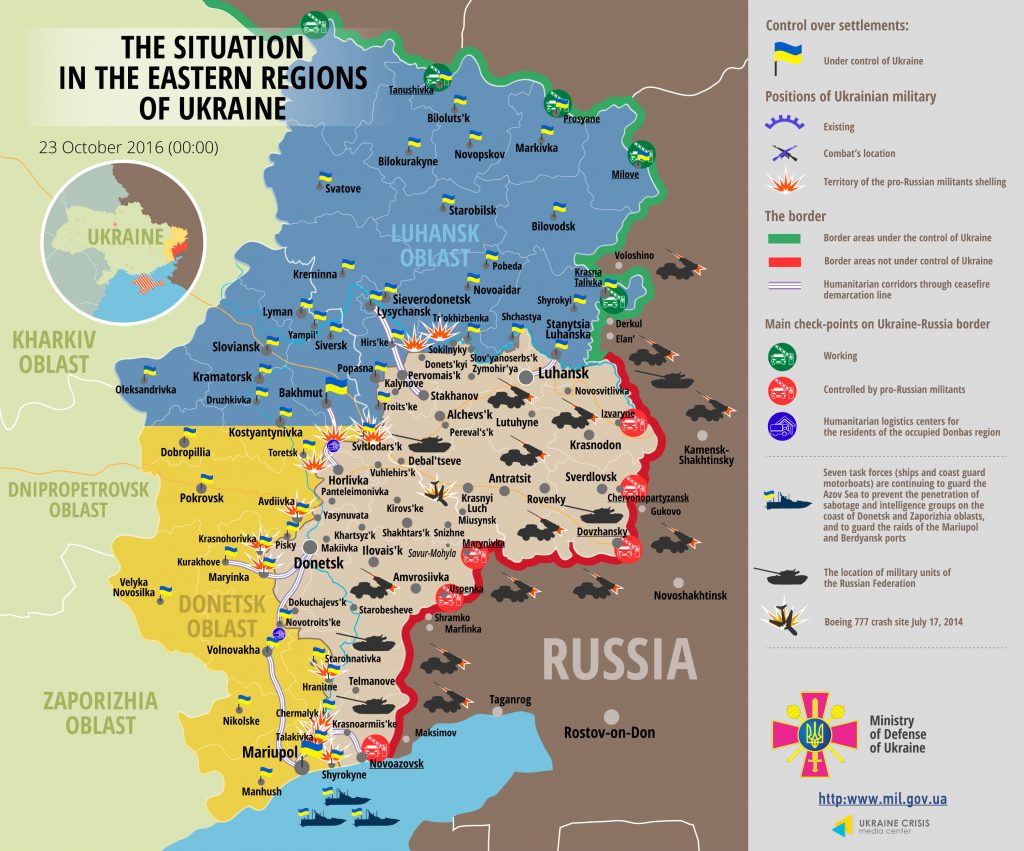 Militants conducted eight attacks in the Donetsk sector, six of these involved use of heavy armor. Hostilities in Avdiivka industrial area continued for 6.5 hours with brief reprieves. Russian proxies were actively using mortar launchers,  cannons and tanks. They launched over 100 missiles from heavy armor. Three buildings were damaged in Avdiivka due to militants’ aggressive actions. Moreover, intense militants’ attacks from mortar launchers and armored personnel carriers took place at the Svitlodarsk bulge, in Zaitseve and Novhorodske. “In total, 22 hostile attacks took place in the Mariupol sector, six of them involved use of heavy armor. Occupants continue shelling our positions from heavy armor. Nevertheless, their intensity reduced in comparison with the beginning of the week. Militants’ mortar and artillery attacks took place in Krasnohorivka, Mariinka and Pavlopil. Hostilities also continued in other areas, namely in Shyrokyne. Militants’ snipers were active in the south,” elaborated Col. Lysenko.

According to the spokesman, a former militant from “Kalmius” Russia-backed militant group surrendered his arms willingly and returned to peaceful life as a part of the program “You are waited for at home” of the Security Service of Ukraine (SBU). “A resident of Donetsk region joined militants in August 2014 wishing to earn money.  He was building strongholds and keeping armed watch. As time passed, the man witnessed outlawry and turmoil caused by militants, so he quit and had been living in Donetsk as a civilian before recent time when he came to Ukrainian law enforcement officers,” summarized Col. Lysenko.