Mariupol sector stands as the area of most intense combat actions. Hostilities also continue in Luhansk and Donetsk sectors, with Avdiivka remaining the main hotspot of the latter.

Tense situation in the Mariupol sector is observed along the entire contact line. Militants are massively using heavy weapons – mortar launchers, tanks and artillery, said Colonel Andriy Lysenko, said spokesman of the Ministry of Defense of Ukraine on ATO-related issues at a press-briefing at Ukraine Crisis Media Center. 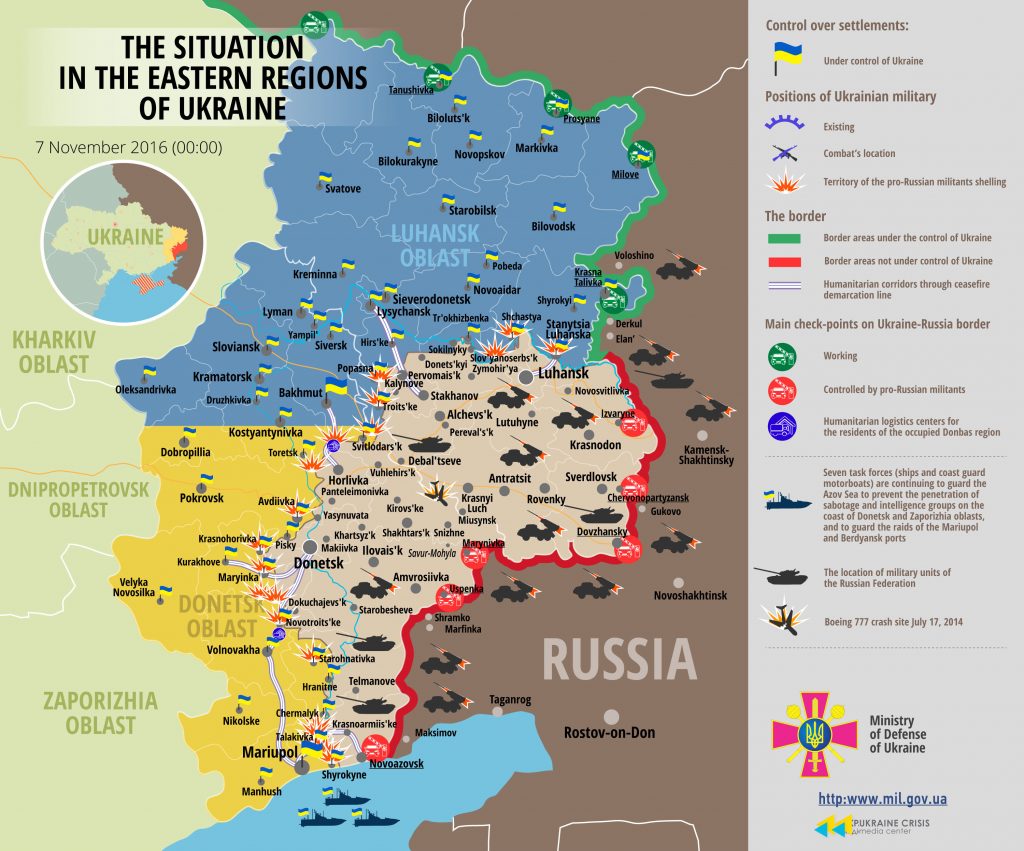 “Most intense attacks took place in Krasnohorivka and in the Pavlopil – Shyrokyne frontline area yesterday. Number of rounds fired from heavy weapons exceeded 100,” said the spokesman. Ukrainian troops returned fire. Moreover, Russia-backed militants are keeping armored vehicles and snipers on the frontline. A total of 32 militant attacks took place in the Mariupol sector in the past 24 hours, 17 of them involved the use of heavy weapons.

Hostilities continued in the area of Stanytsia Luhanska, in Shchastia and on its outskirts as well as in Novooleksandrivka near Popasna. Militants mostly used light weapons. “Almost all attacks took place in the night time, after 6 p.m.,” said Col. Lysenko. In total, militants conducted 12 attacks in the Luhansk sector and one of them involved the use of heavy weapons.

Russian proxies violated ceasefire virtually in all the hotspots of the Donetsk sector. These were Troitske, Luhanske, Zaitseve and Avdiivka. “Occupants are actively using 82-mm and 120-mm mortars firing both in the daytime and during the hours of darkness,” emphasized the spokesman. Over 90 mortar shells were launched at Ukrainian positions. Moreover, in the evening militants moved a tank to the frontline positions and fired at Ukrainian troops several times. “Most tense situation yesterday was in Avdiivka, where two intense hostile attacks took place in the evening. Each shelling lasted three hours,” said Col. Lysenko. In total, eight militant attacks took place in the Donetsk sector and six of them involved the use of heavy weapons.

According to Col. Lysenko, another batch of reinforcement for militants arrived from Russia. Two railway cars with ammunition for Grad multiple rocket launchers arrived in Stakhaniv and an echelon carrying 12 units of military equipment came to Ilovaisk. Five cars with ammunition, three with spare parts for combat armored vehicles, one with batteries and three with cold weather clothes arrived in Khartsyzsk.