The biggest number of militants’ attacks is registered in the Mariupol sector, said Col. Oleksandr Motuzyanyk, spokesman of the Ministry of Defense on ATO related issues at a press briefing at Ukraine Crisis Media Center.  “The most intense attack took place in Hnutove. It lasted only 35 hours, but occupants were shooting simultaneously from 82-mm and 120-mm mortars and 122-mm cannons. This cannonade was followed by militants’ snipers fire,” said the spokesman. 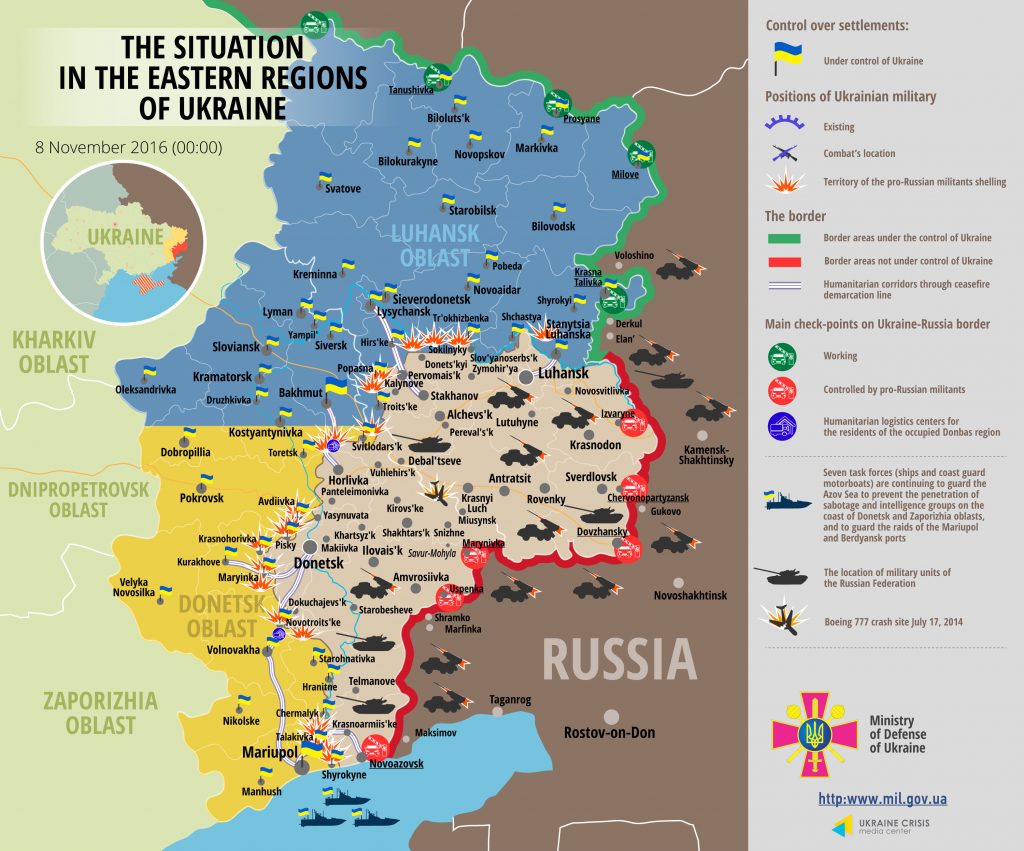 Lion’s share of attacks takes place in Pavlopil – Shyrokyne frontline area.  Self-proclaimed “9th regiment” of Russia-backed militants is actively using heavy weapons and shells mortar launchers and missiles at Ukrainian positions in dozens. “Moreover, two intense mortar attacks of Russian proxies took place in Krasnohorivka,” said Col.  Motuzyanyk.  In total, 31 militants’ attacks took place in the Mariupol sector yesterday, and 10 of them involved use of heavy armament.
Luhansk sector. Hostilities continued along the entire front line, even in the areas where militants’ attacks are extremely rare. Krymske was the main flashpoint yesterday, and militants used 120-mm mortars twice.  “The biggest number of militants’ attacks was registered in the Popasna district,” emphasized the spokesman. Moreover, militants violated the ceasefire in Stanytsia Luhanska area, near Slovianoserbsk and in Novotoshkivske at the Bakhmut road. Most attacks took place during the hours of darkness. In total, nine attacks took place in the Luhansk sector and two of them involved use of heavy weapons.
Ukrainian Armed Forces incurred no losses in combat in the last 24 hours, and four troops were wounded.
The situation in the Donetsk sector, like before, was restless in all the key flashpoints – Luhanske, Zaitseve, Maiorsk and Avdiivka. Furthermore, Russia-backed militants were active in the vicinity of Donetsk airport.  Over 60 mortar shells were launched at Ukrainian positions yesterday, almost all of them during the daytime. “The situation, as always, was the most difficult in the Avdiivka industrial area where two series of hostile attacks happened in the night and during the day.  Their total length exceeded four hours. Ukrainian troops responded with fire,” said Col. Motuzyanyk. In total, 10 militants attacks happened in the Donetsk sector yesterday and four of them involved use of heavy weapons.

According to Col. Motuzyanyk, Ukrainian Security Service detained a militants’ engineer from “Cossacks” Russia-backed militant group. He admitted he was helping reconnaissance subversive group to plant mine on the paths to Ukrainian strongholds. “He also confirmed that Russian career officers are coordinating and training militants which proves once again that entire vertical of occupational forces in Donbas is controlled by Russian General Staff,” added the spokesman.

Weekly overview of the dynamics of fighting available here.