The Security Service of Ukraine (SBU) exposed and ceased the work of network militant informers in Donetsk region, informed the spokesman of the Ministry of Defense of Ukraine on ATO related issues Colonel Andriy Lysenko at a press briefing at Ukraine Crisis Media Center. “Field investigators detained five hostile agents. They were collecting information on manpower, weapons and routes of Ukrainian troops in Kurakhove, Krasnohorivka and Maryinka,” said Col. Lysenko. The criminals were passing the data over the phone or the Internet, and militants used this information further to shell Ukrainian troops’ positions and commit subversive acts. “Law enforcement officers seized mobile phones, SIM cards and computers used for criminal activity,” added the spokesman.
One Ukrainian serviceman died in combat yesterday, and one was injured. 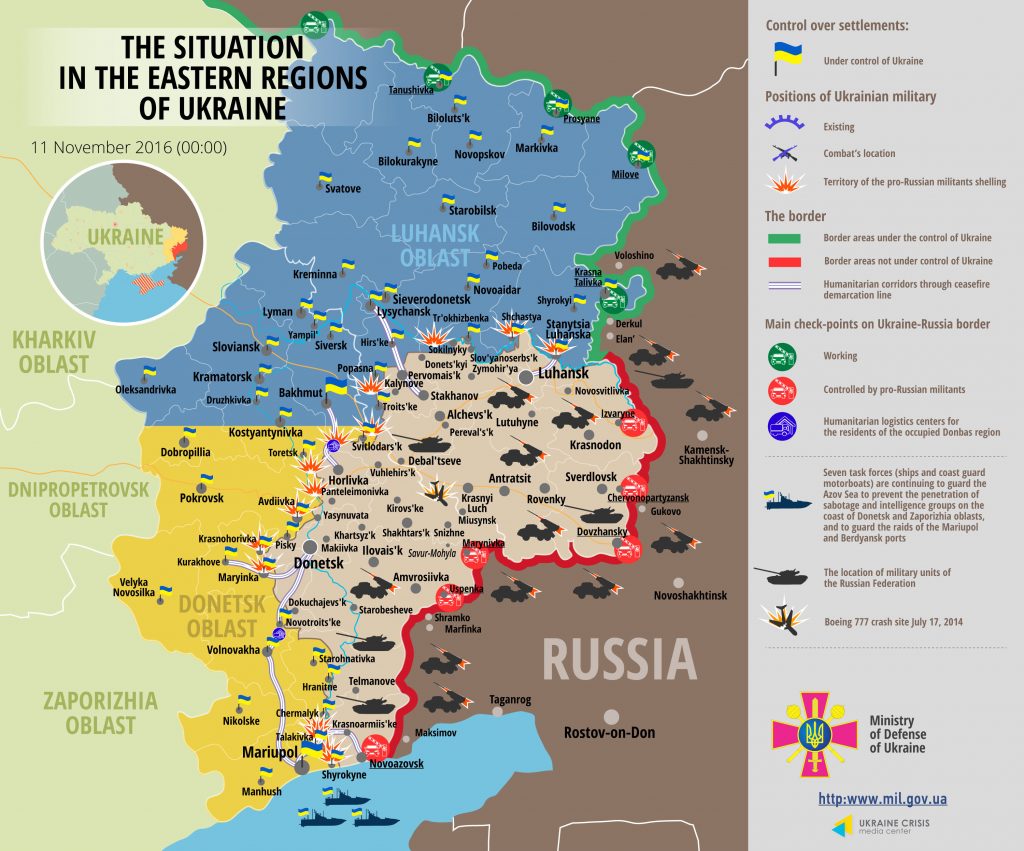 Main hostilities continued in the east of the Luhansk sector. Militants repeatedly violated the ceasefire in Stanytsia Luhanska and Shchastia. Light weapons and snipers were used in both areas. Two militants’ attacks took place in Krymske and Novozvanivka, one shelling in each area, and the second one involved use of mortar launchers.
In total, eight insurgents’ attacks took place in the last 24 hours in the Luhansk sector, and heavy weapons were used once.
Three intense militants’ mortar attacks took place at the Svitlodarsk bulge in the Donetsk sector yesterday. Each attack was quite lengthy, from 35 minutes to one hour. Avdiivka industrial area was the main flashpoint. Intense firefight continued 2.5 hours there non-stop. In addition to light weapons, militants were actively using mortar launchers. “Moreover, a series of hostile attacks took place near Horlivka in three positions at once,” added Col. Lysenko. In total, seven militants’ attacks took place in the Donetsk sector yesterday, and five of them involved use of heavy armor. According to the spokesman, one flight of reconnaissance unmanned aerial vehicle of Russia-backed militants was observed.

Militants conducted one intense artillery shelling in the Mariupol sector, accompanied by a series of mortar attacks. The situation was restless in the Maryinka district and in the south, near the Sea of Azov. “Hostile fire is extremely intense: militants launched over 170 mortar shells and artillery missiles at Ukrainian positions yesterday,” said the spokesman. In total, 20 militants’ attacks took place in the Mariupol sector yesterday, and nine of them involved use of heavy armor.

MoD report as of November 10, 2016 is available here, inteactive map of the region is here, for the chronological chart of shellings, please go here.