Militants shell potential area of troops and equipment redeployment in the Luhansk sector. Over 120 shells fired at Ukrainian positions in the Mariupol sector. Russia continues supplying militants with weapons and fuel.

Hostilities in the Donetsk sector continue almost in all flashpoints, first of all in the Avdiivka industrial area. In total, attacks of militants in this area lasted five hours, informed the spokesman of the Ministry of Defense of Ukraine on ATO related issues Colonel Andriy Lysenko at a press briefing at Ukraine Crisis Media Center. “Militants were actively using arms and a tank,” said Col. Lysenko. Russia-backed militants were using mortars in Troitske at the Svitlodarsk bulge, Zaitseve and Pisky, launching over 40 mortar shells. In total, six militants’ attacks took place in the Donetsk sector yesterday, and two thirds of them involved use of heavy armor. 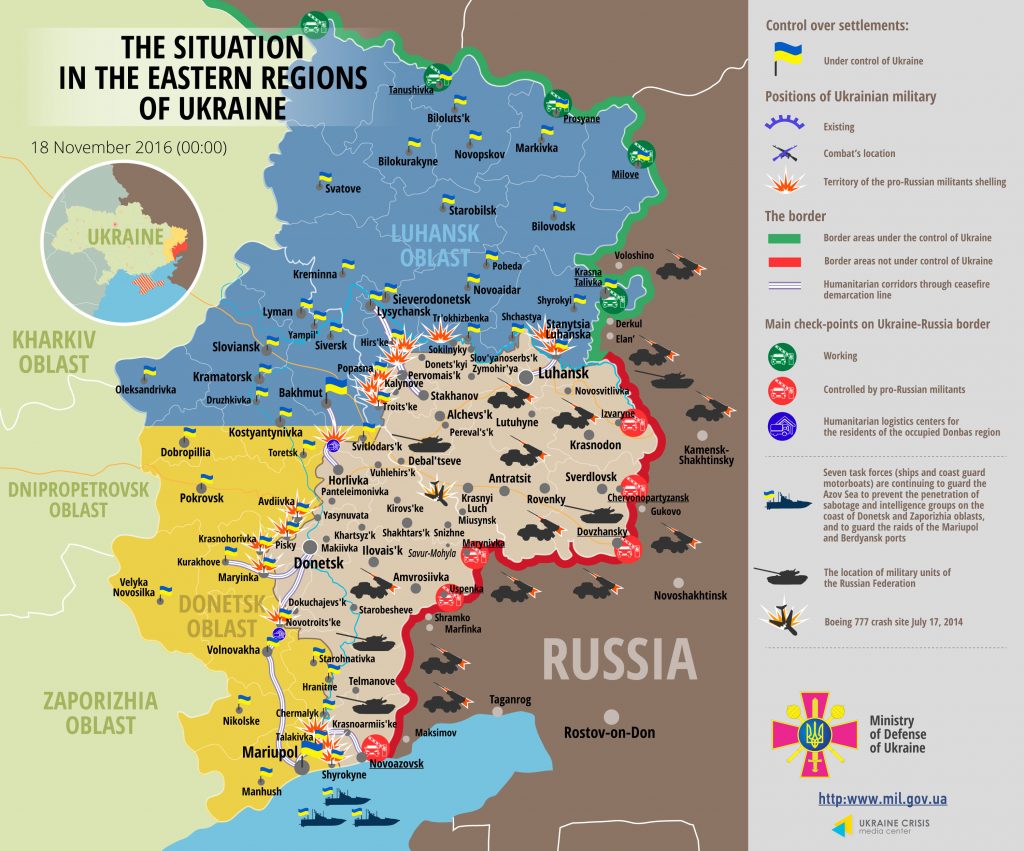 Militants are systematically shelling the potential area of further disengagement of troops and equipment in Stanytsia Luhanska in the Luhansk sector. In addition to light weapons, Russia-backed militants were using armored personnel carrier. “Moreover, occupants were active in other areas – south of Stanytsia Luhanska, in Krymske, Orikhove and Zolote. Mortars were used in all these areas,” added the spokesman. Militants were shelling Ukrainian positions in Popasna district between 5 and 8 p.m., using cannon artillery in addition to mortar launchers. In total, 16 militants’ attacks took place in the Luhansk sector yesterday, and seven of them involved use of heavy armor.

Militant were actively using mortars and cannons of various calibers and a tank in the Mariupol sector. “The situation was restless in the Mariinka district and in Pavlopil-Shyrokyne frontline area,” said the spokesman. Over 120 shells were fired at Ukrainian positions. In total, militants attacked 18 times in the Mariupol sector and used heavy armor in 14 incidents.

Ukrainian Armed Forces incurred no losses in combat, and one soldier was injured.

According to Col. Lysenko, another batch of reinforcement for militants arrived from Russia. Five tanks, seven Grad multiple rocket launcher systems and two command and control vehicles came to Sverdlovsk, and 18 fuel tanks with combustible and lubrication materials were brought to Yasynuvata railway station.