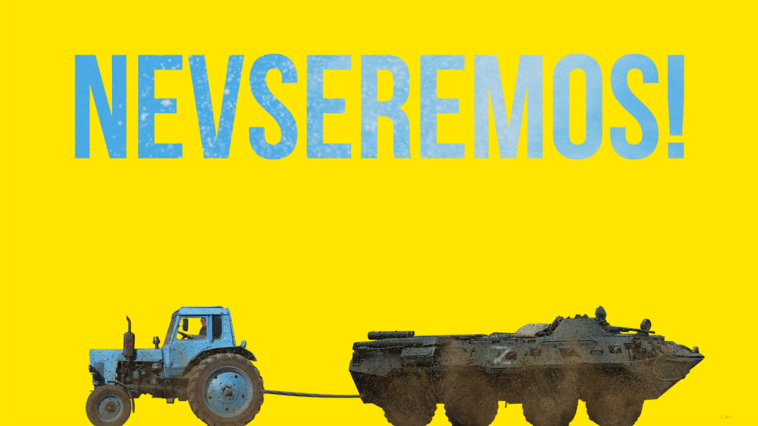 Russia didn’t succeed in its Blitzkrieg, none of the russists managed to reach Kyiv in two hours/days (or in 2 weeks either). Kyiv is still standing, yellow&blue flag is still there, the spirit of Ukrainians is stronger than ever! The sentiments towards russians have vanished even in the russian-speaking regions and among the most tolerant of people.

The first shock had subsided and now we would like to explore in more detail what had happened during those days in Ukraine (which psychologically feel more like years).

What had changed in Ukraine and which aspects were brought out by this war globally?

No one has any doubts about it: neither Ukrainians nor Western analytics, nor Bellingcat, nor a Ukrainian babushka, who threatens the invaders with an axe, not the least of all the Ukrainian warriors.

When I mentioned this to my foreign friends on the first day of war, they were smiling back sympathetically with tears in their eyes. Now they translate our memes into their languages, subtitle the videos, put pressure on their respective parliaments and gather big protesting crowds in front of russian embassies.

The question whether Ukraine will win is no longer a subject of discussion – everyone knows that we will win. We will win because our warriors are courageous and protect their own land, their own children and freedom. Therefore the line to join territorial defence is long and the jokes about “pulling some strings” to get drafted before others are not really jokes.

Behind each of our warrior there are thousands and thousands of volunteers and simple Ukrainians who make the camouflage nets, pour Molotov cocktails, house refugees, sort humanitarian aid, raise funds for the army, work in information field, edit videos, write songs and paint posters.

A veteran employee of Ukrpost service had shot down a russian plane, a woman in Kyiv hit a military drone with a jar of pickled tomatoes (first version was about pickled cucumbers – a fake), Roma villagers had stolen a tank, an unarmed Militopol resident forced armed russian soldiers to retreat by intimidating them. And it is just a fraction of those absolutely fantastical sounding stories happening every single day.

This isn’t a war between Russia and Ukraine, it is a war between civilized people and barbarians,  elves and orcs, Zombies and humans, freedom and hate, – to each his own metaphor.

We have an opportunity to study the “second most powerful army in the world”, the notions of “russian world” and “special way” which are frequently mentioned by putin and his propaganda. Needless to say, a lot of people believed in those notions. International leaders, cultural curators, student activists of the free world, they all called him a firm leader and pondered the mysteries of “russian soul” at least once in their life.

The West imagined Russia as a savage and interesting character, strong, ruthless and dangerous, with its glorified army and nuclear button.

But to their surprise a big russian bear turned out to be a small miniscule Orc, who cowardly surrenders and cries about “being part of a military exercise and being in the dark about the rest”. It unleashes its rage  by hurting civilians, bombing hospitals and schools, executing humanitarian workers and journalists, committing war crimes or just resorting to petty crime like looting stealing chickens and jars of pickles from destroyed homes.

Today we all see that putin and his army are no great evil but just an horde of barbarians, with expired rations, bad uniforms and completely demotivated.

Russia completely lost the information war in Ukraine and the world. All these years russians spent enormous amounts of money on their networks of propagandists and influencers. Propaganda of russia was transmitted in all the languages and infiltrated all target audiences: from open russists to gentle art curators of cultural centers and lovers of russian ballet.

All this activity was sponsored directly by kremlin or through other big enterprises (like Gazprom) and even world institutions. Kremlin’s propaganda was so massive that it would prove difficult to name all the people which were part of it (although necessary for Hague’s tribunal).

Nevertheless, in just two weeks of war in Ukraine, nobody hears or wants to hear their propaganda. The free world had completely waved off all the messages, fake news, cultural initiatives and even tearful cries of russian bloggers who suddenly joined “For peace” movements when Youtube cut off their monetization. The epiphany came fast and will, hopefully, last a while.

Putin showed that calculating the next steps of a tyrant and madman is a waste of time. For many long years the whole world tried communicating with russia as they would with a country which has some rational objectives. Many leaders from the West have tried to give putin a chance to “save face”. They cherished their faith in “red lines” and agreements or guarantees.

But this turned out to be useless. Today we see that even the most outrageous and funny ideas like forcing Ukraine to change Zelenskiy to exiled Yanukovich are taking seriously by kremlin. Russians indeed produced medals “for taking Kyiv”, “for taking Lviv”, their soldiers indeed brought their dress uniforms for the victory parade (which would supposedly happen just two days after the invasion), they really believe that their army in swamp-like camouflage will reach La Manche. Yes, this scares all the sane people of the world.

After watching russian troops in Ukraine using all their arsenal of prohibited weapons, committing war crimes each day (executing families during evacuation, starving Mariupol, block the access of humanitarian organizations, bring in weapons in ambulance cars), it seems that they are capable of anything. Even creating a global catastrophe.

It is important to understand that the propagandists had succeeded in convincing themselves that russian army is undefeatable, when in reality putin is strong only when the West is weak. The free world is rational, it calculates the consequences of its actions to protect themselves and their children. BUT when at war with a madman one must also assess the consequences of inaction. This discovery may save a lot of lives both in Ukraine and all over the world.

“It is impossible to awaken someone who pretends to be asleep”. This quote is attributed to Mahatma Gandhi but, regardless of its source, this is exactly what is happening in russia today. For many Ukrainians this had become a real revelation. Many tried to talked to russians, send them videos and photos, tell them their horrible stories. Our celebrities and public persons recorded addresses in russian language but this had absolutely no effect on them. Russian residents turned out to be deaf to the truth and common sense, putin’s rating increased as it did after annexation of Crimea. While the war is raging in Ukraine, ruissians happily record videos of putting Z svastika’s on their car windows, organize flashmobs to support the war, and call for their soldiers to bomb and kill innocent Ukrainians.

Indeed, putin is a dictator, but his people have been supporting his cannibalistic ideas for years. Those few who are able to think for themselves, are inactive and unable to unite and make an effort against the system. Today out of the “leftovers” of social media which still work in Russia, we hear the cries of oligarch’s wives and bloggers that the sanctions had a direct impact on them and that it isn’t fair. HOWEVER, this does not mean that they understood the reason for these sanctions. This only means that they had to give up their comfort in which they were silent (or articulate in their support of kremlin), silently watched the war in Georgia, annexation of Crimea, war crimes in Syria, occupation of Donetsk and Lugansk, and then the bombings of Kyiv, Kharkiv and humanitarian catastrophe in Mariupol.

To my astonishment I have recently realized that the russians really (!) believe that the maternity hospital bombardments are fake, that their army is liberating the world, and that invasion of Ukraine is a preventive measure because “NATO was about to strike them the day after”.  I thought that someone in their right mind could never believe this kind of propaganda. But those are not bots, they are regular russian people who share those imperialistic views of their leaders.

Therefore, I concluded, that “joint liability” is a completely adequate measure for this country in view of the crimes they committed, and the mass approval thereof.