“The past 24 hours have shown that the adversary is not going to respect agreements on complete and comprehensive ceasefire. Starting December 24, militants continued firing on Ukrainian positions,” said Col. Oleksandr Motuzyanyk, Ministry of Defense of Ukraine spokesperson on ATO related issues at a press-briefing at Ukraine Crisis Media Center. Ukrainian troops incurred no casualties yesterday, two troops were wounded. Two troops in Bakhmutska road went astray and were captured by the militants. 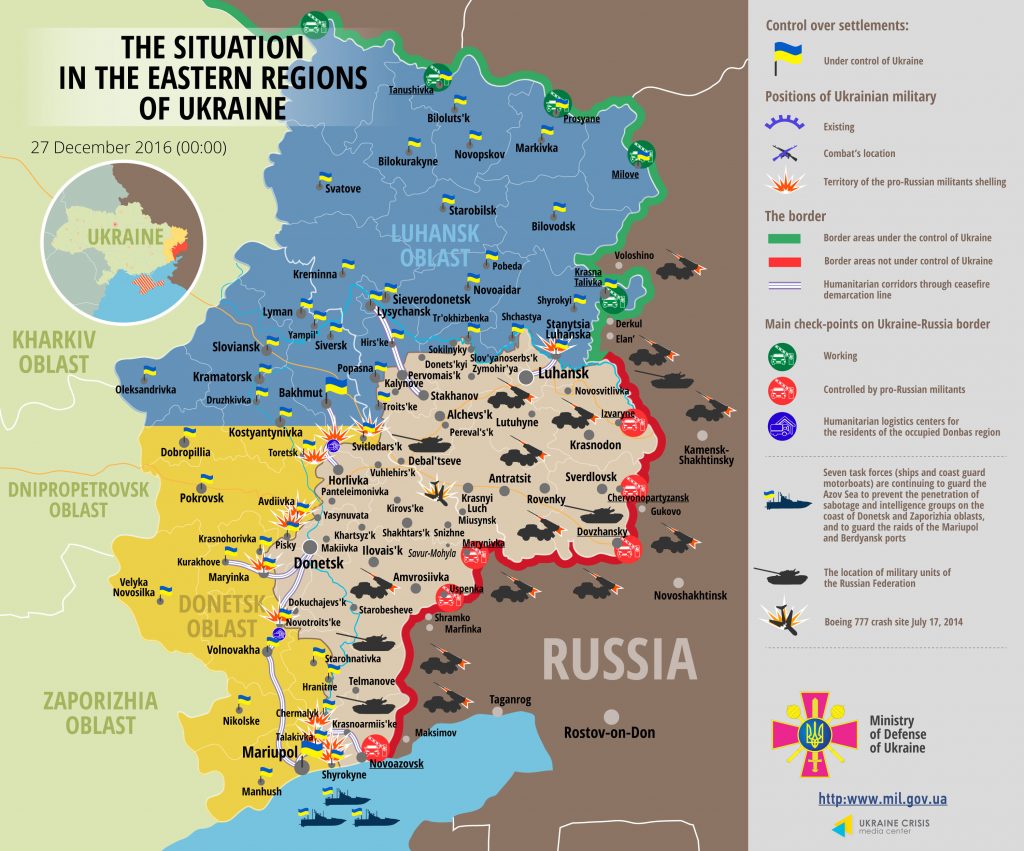 The militants violated the ceasefire once in the Luhansk sector. Late at night they fired from under-barrel grenade launcher on Ukrainian positions near Stanytsia Luganska.

Most of the ceasefire violations in the Donetsk sector occurred on the Svitlodarsk bulge, where the Russia-backed militants were firing from grenade launchers and small arms. After 9 p.m. they started shelling Ukrainian positions from mortars, it continued for one and a half hours. “One provocation took place in Zaitseve and one more in Opytne. In Avdiivka, the militants fired two times in direction of Ukrainian positions,” said the spokesperson. Adversary did not use heavy weapons there. In the evening, the militants’ sniper was firing in Avdiivka industrial zone. In total, the militants violated the ceasefire 12 times in the Donetsk sector, one of them involved use of heavy weapons.

Shyrokyne remains the key flashpoint in the Mariupol sector. Over the past 24 hours the militants used there all types of weapons except for multiple rocket launchers. “According to calculations of the General Staff, the illegal armed groups fired nearly 100 mortar mines and 20 artillery shells on our positions in this frontline area. In Shyrokyne, the enemy fired three times from tank and armored fighting vehicles,” said Oleksandr Motuzyanyk. The militants also fired on Ukrainian positions in Mariinka, Novotroitske, Pavlopil, Talakivka and Vodyane. “The enemy did not use heavy weapons there, except Talakivka, where they launched 10 mortar mines,” added spokesperson. In total, the Russia-backed militants violated the ceasefire 24 times in the Mariupol sector, ten of them involved use of heavy weapons.