Yesterday a vehicle of OSCE Special Monitoring Mission to Ukraine ran over an anti-tank mine near Pryshyb village in Luhansk region. One mission monitor, a US citizen, died at the scene. Two other monitors (citizens of Germany and Czech Republic) were taken to hospital in Luhansk. In total, the patrol consisted of six monitors on two vehicles.

“All the responsibility for this incident rests with militants, as this area has been controlled by self-proclaimed ‘Luhansk People’s Republic’ since summer 2014. Article 6 of the Memorandum of September 20, 2014 envisages demining of front territories, which is yet another evidence of the enemy’s non-compliance with the Minsk Agreements. Ukrainian authorities support thorough investigation of the circumstances of the OSCE vehicle explosion and prosecution of culprits,” elaborated Ukrainian Ministry of Defense spokesman on ATO Colonel Oleksandr Motuzyanyk at a press briefing at Ukraine Crisis Media Center.

Speaking of the operative situation, Russia-backed militants were violating the ceasefire along the entire frontline. They conducted eight, 11 and 15 attacks correspondingly in Luhansk, Donetsk and Mariupol sectors. “One Ukrainian serviceman was killed in action yesterday, and two more were wounded,” reported the spokesman. 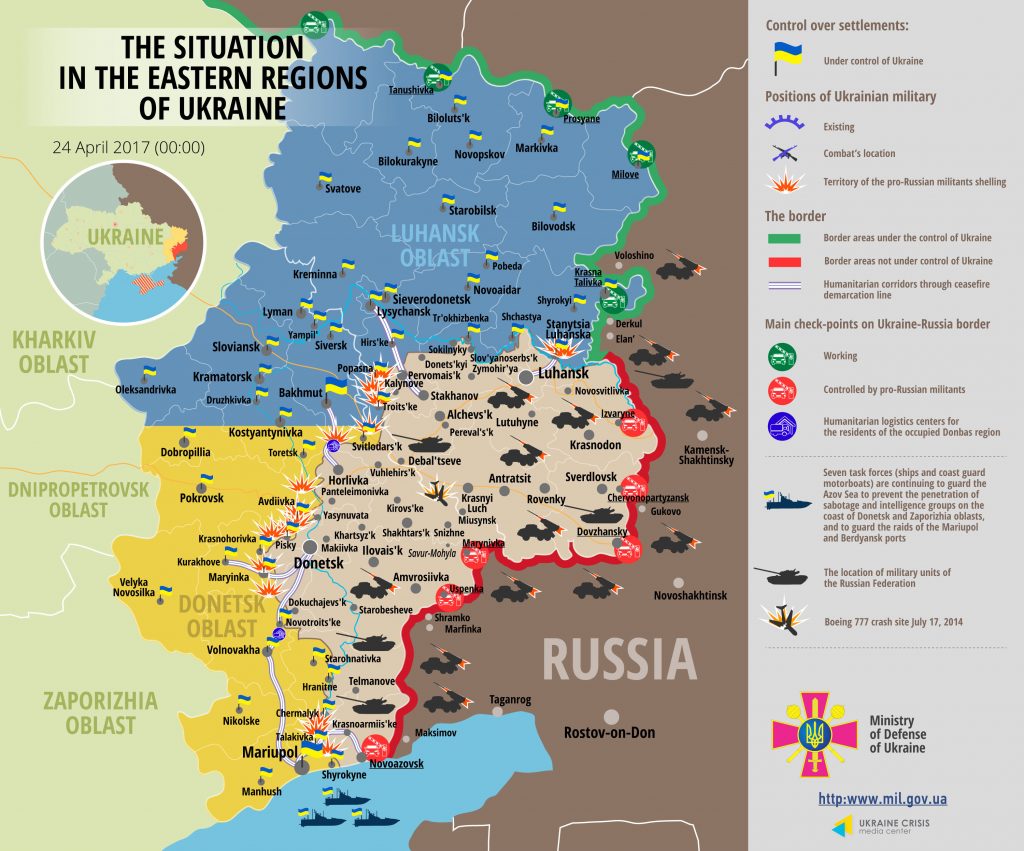 Main hostilities in Luhansk sector took place in the Popasna district between 14:00 and 22:00. Militants used mortars once, and grenade launchers and machine guns during other incidents. At least three Ukrainian strongholds came under hostile fire. “Moreover, the enemy violated the ceasefire and used armored vehicles in Stanytsia Luhanska and the adjacent Valuiske,” said Col. Motuzyanyk.

Maryinka and Pavlopil–Shyrokyne frontline remain two main areas of armed hostilities in Mariupol sector. “One hostile attack took place in Taramchuk. Enemy used mortars once and snipers three times. Like in other sectors, militants are more active in the evening,” said the spokesman.

Report on the military developments as of April 23 is available here. Interactive data on the shelling: chronology shelling chart and the interactive map.