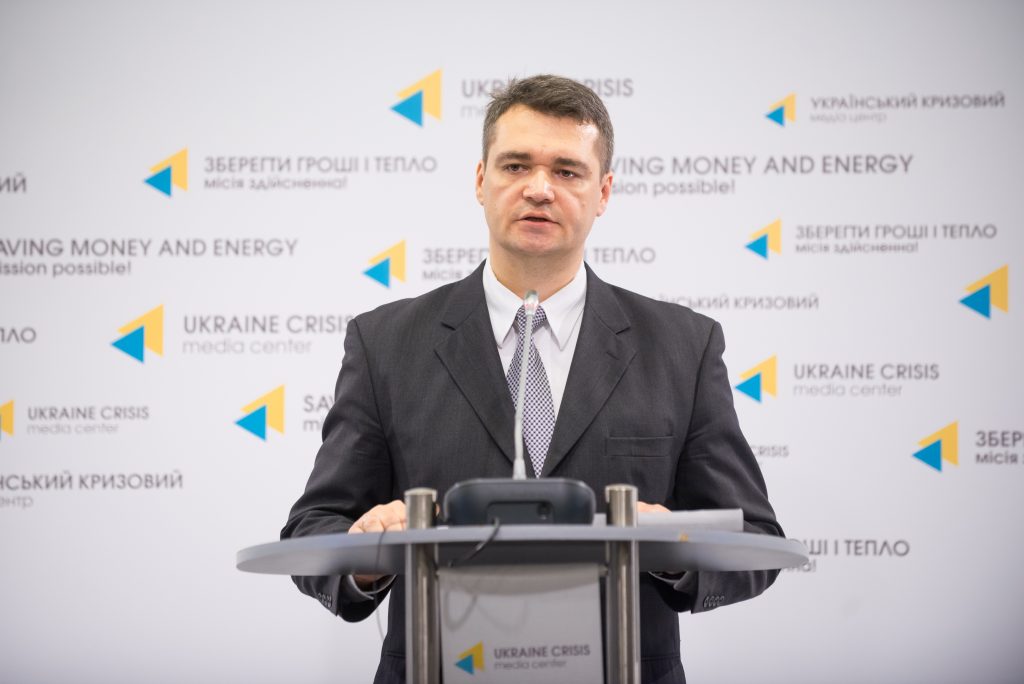 The overall combat situation at the front line continues to have simmering nature with numerous armed provocations performed by Russian proxies both day and night. Additionally, militants continued violating recent Eastertime “agreement” on cease-fire by frequently shelling Ukrainian positions with heavy weapons. Over the week, the number of violations ranged between 18 on April 19 and 47 the next day – April 20.

“Yesterday, at approximately 11:17 am, the vehicle of the OSCE Special Monitoring Mission to Ukraine ran over the anti-tank mine while on patrol. The incident took place near the village of Pryshyb Slovianoserbsk district, Luhansk region, which is currently controlled by the militants of the co-called “LPR”. One SMM member, a US citizen, was killed in the explosion. Two more observers (citizens of Germany and Czech Republic) were transported to the hospital in Luhansk”, stated Vilyen Pidgornyy, Ministry of Defense spokesperson at a press briefing at Ukraine Crisis Media Center. Overall, there were six observers in two cars who were involved in patrolling the specified area.

The Joint Center for Control and Coordination of the ceasefire (JCCC) reported that no hostilities were recorded at the time the incident took place in that area: both Ukrainian Armed Forces and militants of the so-called “LPR” obeyed the cease-fire. At the same time, ATO HQ press center strongly denies the militants` provocative statements about the alleged involvement of Ukrainian military in the incident.  “All responsibility lies with militants as they have been controlling the area of incident since the summer of 2014. Paragraph 6 of the Memorandum as of September 20, 2014 stipulates demining of the frontline areas; therefore, this tragic incident once again demonstrates the failure of Russian proxies to comply with the Minsk agreements. Ukrainian government stands for thorough investigation into the incident and for bringing the perpetrators to justice. Ukrainian Ministry of Foreign affairs has expressed deep condolences to the family of the victim”, Mr.Pidgornyy said.

The enemy remains consistent while choosing their target areas – Stanytsia Luhanska and Popasna as well as Krymske regularly came under enemy fire of low intensity. “The tensest situation was observed on April 21 when militants launched two mortar attacks at Krymske, having discharged nearly 30 rounds”, ”, MOD spokesperson stated. Last week Russian proxies several times opened fire with small arms and grenade launchers in Zhovte, Slovianoserbsk district, where cease-fire violations had been rarely registered in the previous weeks. Throughout the week, the enemy fire activity ranged between 1 (on April 19) and 8 (on April 23) episodes per day.

From Monday to Wednesday the situation was relatively stable and on Thursday April 20 it abruptly deteriorated. Russia-supported forces opened multiple mortar and tank fire at Avdiivka and used mortars in Luhanske and Verhniotoretske. That day, invaders discharged nearly 120 rounds at positions of Ukrainian defenders in the sector. In subsequent days, the intensity of enemy mortar fire slightly decreased, but Russia-equipped militants continued to open fire with small arms and grenade launchers both day and night. “From Friday to Sunday, enemy sniper groups engaged defense lines of Ukrainian army in Avdiivka and adjacent positions. Militants regularly used IFVs in Luhanske and Pisky”, Mr. Vilyen Pidgornyy added. Last week, the daily number of cease-fire violations by the enemy in the sector ranged between 4 (on April 17) and 28 (on April 22).

For the first time in weeks, Russian proxies used mortars predominantly at northern part of the front line. Krasnohorivka, Maryinka and Novotroitske were regularly fired upon with mortars. Russia-backed militants used IFVs in Hnutove, Vodiane and Shyrokyne. On April 17, 18 and 23 enemy sniper groups were most active, engaging Ukrainian defenders at Novotroitske, Mykolaivka, Pavlopil, Talakivka and Vodiane. Last week, the daily number of cease-fire violations by the enemy in Mariupol sector ranged between 12 (on April 19) and 24 (on April 17).

Last week, 4 Ukrainian servicemen were killed in action and 19 troops were wounded in action. Among the wounded, there were 3 servicemen of the National Guard of Ukraine.

“One civilian man was wounded in the war zone last week. The incident happened in Maryinka on Saturday, April 22”, Mr. Pidgornyy stated.

Between April 17 and 23, 16 private houses in Avdiivka and Maryinka were damaged by enemy fire. In addition, Russian proxies hit and destroyed a non-residential building in Avdiivka. Also, residents of Avdiivka and nearby villages throughout the week suffered recurrent blackouts caused by break down of power lines.

Ukrainian authorities arranged for access and safe passage of 23 trucks with humanitarian aid for civilians living in the occupied territory of eastern Ukraine. The aid was provided by the International Committee of the Red Cross, UN High Commissioner for Refugees Representative in Ukraine. The trucks carried over 510 tons of food, building materials, personal hygiene products, and medicine.