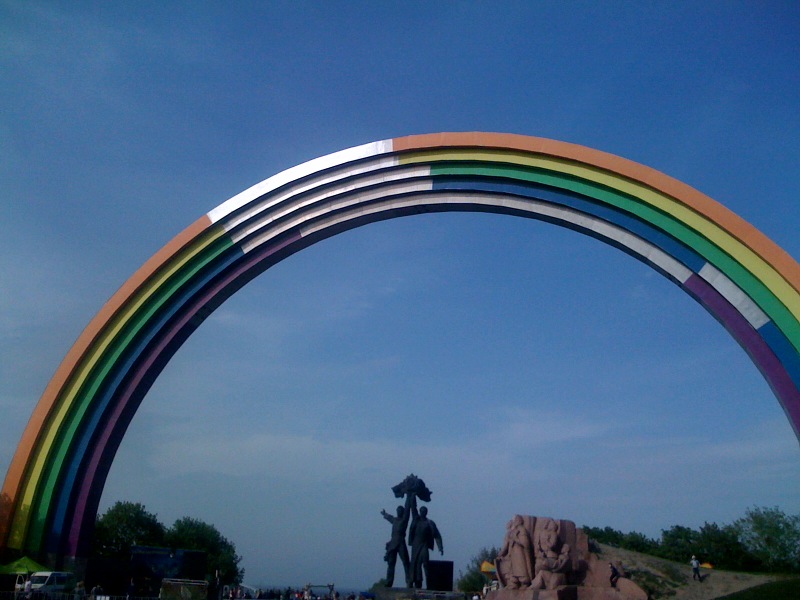 Rainbow-shaped monument in Kyiv, the Arch of People’s Friendship, was started being colored in rainbow colors for the duration of the Eurovision Song Contest 2017. The project met controversial feedback and was thus not finalized.

The metal Arch of Peoples’ Friendship is part of the sculptural group constructed in 1982 to honor the merger of territories in control of the Zaporizhzhian Cossacks with the Muscovite Tsardom that occurred in 1654. The Soviet historic narrative presented the event as “unification of Ukraine with Russia”. The idea to “color” the Kyiv monument and thus turn it into the “Arch of Diversity” belongs to Gennadiy Kurochka, cofounder and managing partner at the CFC Consulting Company. The agency won tender for communication services during the Eurovision 2017. According to the idea the arch was supposed to be covered with the color PVC film to be later removed when the contest is over. “It would only be possible to take down from the pedestal this strong symbol of friendship between the two ‘fraternal’ peoples, the symbol that is irritating many, only if a new, more powerful symbol will emerge – that of the Rainbow,” commented on Kurochka. Kyiv city state administration approved the changes, the works started on April 25.

Part of the city community though took the arch’s coloring as its transformation into a symbol of LGBT community. Some groups voiced their discontent. Thus, journalist and religious activist Ruslan Kukharchuk is one of those who spoke up against the installation, in a comment released to Hromadske Radio he said: “It is a hint on LGBT propaganda,” adding that “the people of Kyiv have not given their consent to the changes made to the Arch of Peoples’ Friendship. Procedures on how to apply changes to a cultural heritage monument of local scale were not respected.” Representatives of the right-wing parties “Pravyi Sector” (right sector) and “Svoboda” (freedom) were also the ones to have spoken against the change.

In a comment to UNIAN news agency spokesperson of the Pravyi Sector Artem Skoropadskyi said: “It comes as hidden propaganda of LGBT. […] While a huge number of people will come here from across Europe, the Kyiv city authorities are trying to position Ukraine and the Ukrainian capital as a capital of filth.” Soon after the works were suspended.

Gennadiy Kurochka, the brains behind the project, leaves the space to interpret the project’s idea wide, without narrowing it down to the LGBT symbolics only, but at the same time does not rule it out. At the moment the biggest part of the Arch is covered with color film, the segment in the middle stays rough, in metal. “The Arch is already colored. We leave it as it is now,” Kurochka replied to a Facebook-comment. “Leaving it as it is comes indeed as an honest and meaningful gesture,” wrote art expert and researcher of the gender theme Tamara Zlobina.