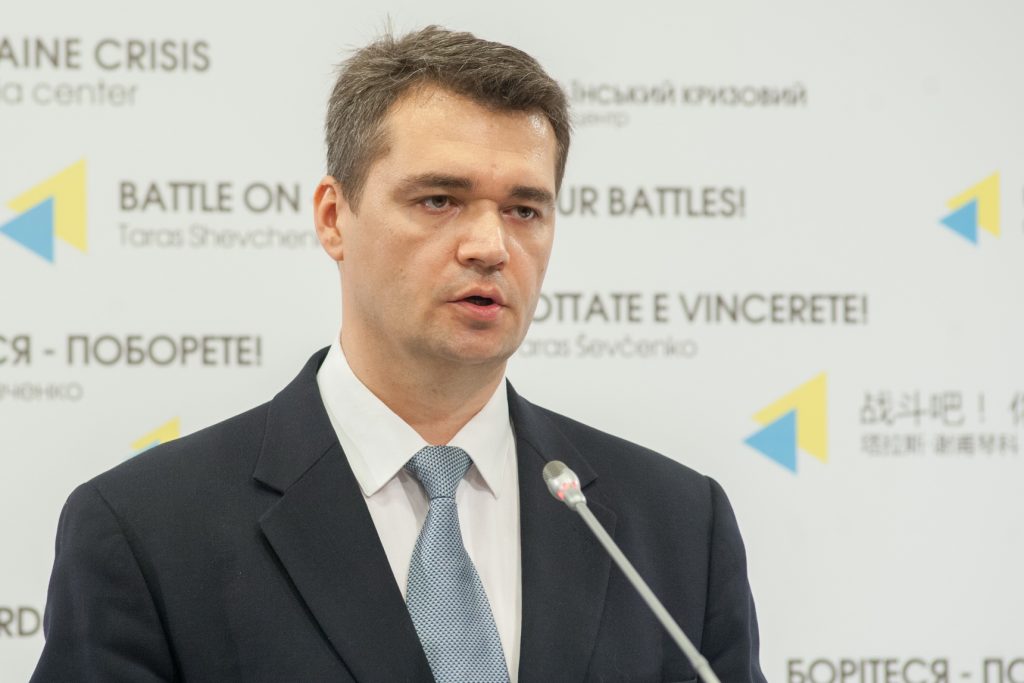 Overall, the number of ceasefire violations ranged between 21 on April 24 at the lowest point and 70 on April 28 at the highest.

Situation on the frontline was characterized by new escalation of hostilities. This was likely triggered by the new replenishment of ammunition through direct supplies from Russia. “Frequent ceasefire violations on the part of Russian proxy forces occurred on the daily basis. Compared to the week earlier, last week’s intensity of enemy shellings increased by 30%, while the share of the heavy weapons use increased by 69% (on average, militants fired at Ukrainian positions 147 shells a day)”, stated Vilyen Pidgornyy, Ministry of Defense spokesperson during a press briefing at Ukraine Crisis Media Center.

The combat situation in the sector significantly deteriorated as Russia-supported militants resumed artillery fire at the positions of Ukrainian defenders. Stanytsia Luhanska and Popasna areas as well as Krymske, regularly came under enemy fire of medium intensity. For the first time in weeks, the Russia-backed militants violated the cease-fire in Zolote area. “The largest number of violations was observed on April 26 and 28. On April 26 invaders opened an hour-long mortar fire at Novooleksandrivka, having discharged more than 30 mortar rounds. On April 28, pro-Russian proxies used 120 mm mortars at Krymske, Novooleksandrivka and Orikhove. The same day, the enemy fired upon Novozvanivka with 122 mm artillery”, MoD spokesperson stated. Last week, the enemy fire activity ranged between 8 (on April 27) and 19 (on April 28) episodes per day. Overall, last week, militants violated cease-fire regime in the Luhansk sector 79 times.

Enemy forces actively engaged Ukrainian defenders with the broad range of weapons across the entire front line. Occasionally, invaders used IFVs in Svitlodarsk and Donetsk airport areas. On April 27, pro-Russian proxies initiated a two-hour complex fire at Avdiivka, having discharged nearly 50 mortar and artillery rounds. The following day, positions of Ukrainian Armed Forces in Troitske were fired upon with 152 mm artillery and mortars. During the incident, Russia-equipped militants discharged 60 rounds. “Last week, the daily number of cease-fire violations by the enemy in the sector ranged between 9 (on April 26 and 29) and 21 (on April 25). The total number of cease-fire violations throughout the sector by the enemy reached 86 last week”, Mr. Pidgornyy said.

The number of cease-fire violations, committed by Russia-backed militants in the sector throughout the week, was the highest in the war zone reaching 198 which is twice as much as two other sectors combined. However, the number of fire incident with heavy weapons was the lowest. Enemy traditionally engaged Ukrainian Armed Forces in Maryinka district and at southern coastal defense lines. On April 27, enemy actively used IFVs in Maryinka, Vodiane, Hnutove and Shyrokyne. Early in the morning of April 28, pro-Russian proxies opened mortar fire against Krasnohorivka and discharged 50 rounds in just 30 minutes. On April 30, enemy sniper groups advanced to the front line. That day, 5 incidents of sniper fire were registered in the sector. Last week, the enemy fire activity ranged between 26 (on April 26) and 35 (on April 28) episodes per day.

Over the week, Ukrainian troops registered 10 episodes of hostile drones conducting aerial reconnaissance in the ATO area. All the enemy scouting flights were recorded in the Donetsk sector.

Last week, Russia delivered by train about 650 tons of fuel to Rovenky. Additionally, Ukrainian military intelligence recorded arrival of more than 100 members of so-called “Russian Kazaky units” to Donetsk. It was established they went to Eastern Ukraine right from Kadamovsky training area in the Rostov region, Russia, where they had previously undergone heavy military drills. Additionally, on April 27, yet another so-called “humanitarian convoy” including 31 trucks, with most of its cargo unidentified, entered temporarily occupied territories of Eastern Ukraine.

Four civilian men were wounded in the conflict area last week. “Three of them incurred injuries from enemy fire in Maryinka, and one was wounded in a booby-trap explosion near Zaytseve, Donetsk sector”, MoD spokesperson stated.

According to Mr. Pidgornyy, on Saturday, April 29, Russian proxies shelled a cemetery in Popasna town. Twenty-one graves were desecrated by enemy shells. Ukrainian emergency servicemen detected 9 fragments of MLRS “Grad” rockets on the spot of the incident. In addition to this, 20 private homes and 2 non-residential buildings were damaged as a result of enemy shellings last week. These buildings are located in 3 towns and a village in the Donetsk and Mariupol sectors at the front line. They are: Zaytseve, Avdiivka, Krasnohorivka and Maryinka.

Over the week, Ukrainian authorities arranged for access and safe passage of 47 trucks with humanitarian aid for civilians living in the occupied territories of eastern Ukraine. The aid was provided by the International Committee of the Red Cross, UN High Commissioner for Refugees Representative in Ukraine and a charitable foundation. The total payload of aid exceeded 900 tons of food, building materials, personal hygiene products and medicine.