In total, militants conducted 50 ceasefire violations yesterday, using heavy weapons in 23 of them.

In Donetsk sector Russia-equipped militants conducted 18 ceasefire violations, using heavy weapons in 11 of them. The situation is the most restless in Horlivka perimeter and near Avdiivka. “Militants used mortars in armed provocations at Verkhniotoretske and Zaitseve. They used mortars and 122-mm artillery near Avdiivka. Enemy provocations happen in other places as well, namely in Luhanske and Pisky,” reported Ukrainian Ministry of Defense spokesman on ATO Colonel Oleksandr Motuzyanyk at a press briefing at Ukraine Crisis Media Center. 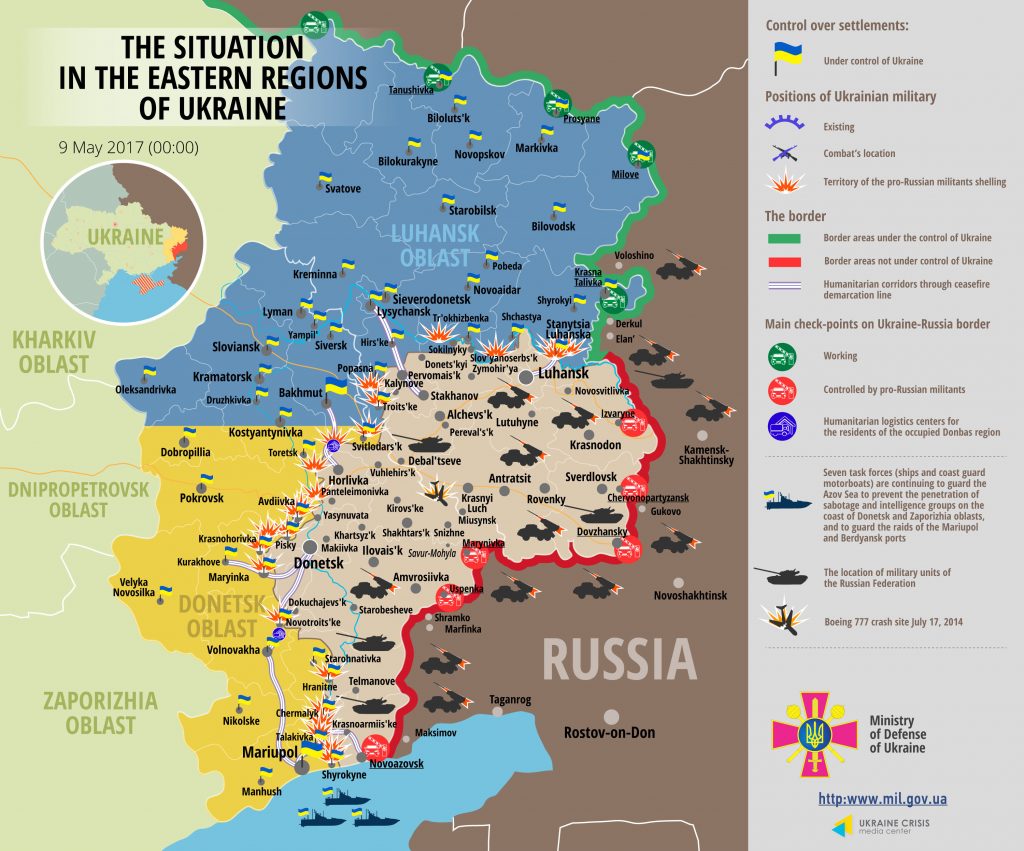 Mariupol sector faced 21 enemy ceasefire violations yesterday, seven of which involved heavy weapons. Russian proxies conducted two mortar attacks in Krasnohorivka. Militants’ machine gun attack wounded a civilian woman in Maryinka. Enemy snipers were actively attacking in Novotroitske. All the other ceasefire violations took place in Pavlopil – Shyrokyne frontline. “The situation was the most restless in Pavlopil yesterday, where pro-Russian troops were shelling Ukrainian positions with mortars for over two hours. Moreover, they shelled Hnutove with artillery and attacked Vodiane with mortars,” said the spokesman.

“One Ukrainian soldier was killed near Slavne by an unidentified explosive device. Five troops were wounded in Pavlopil, two in Avdiivka, one in Kamianets and one in Troitske,” reported Col. Motuzyanyk.

Report on the military developments as of May 8 is available here. Interactive data on the shelling: chronology shelling chart and the interactive map.