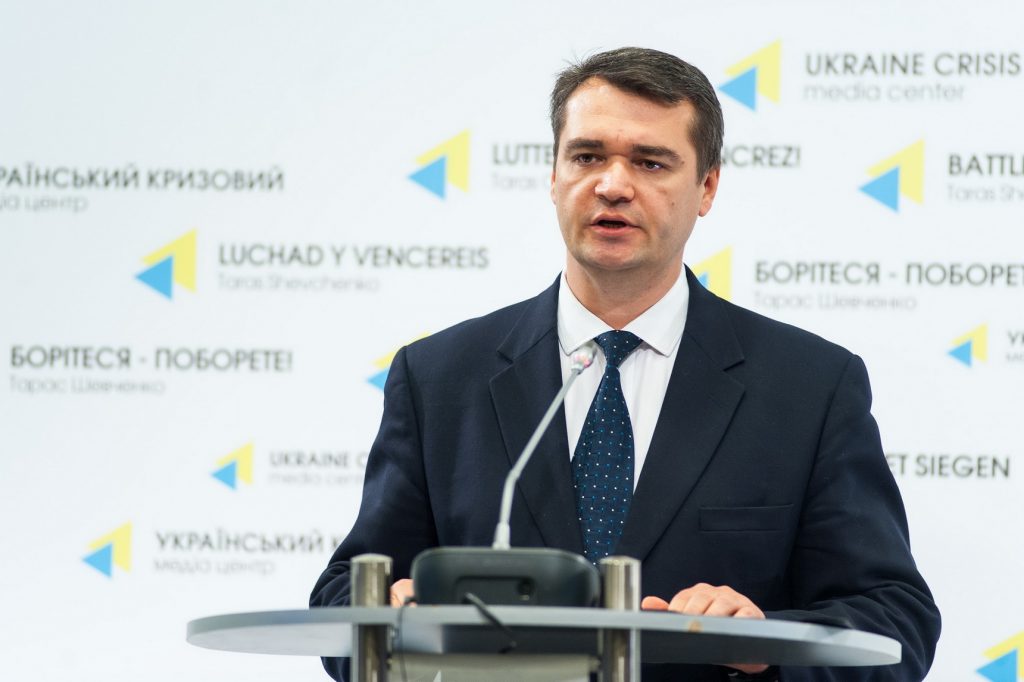 The number of ceasefire violations committed by Russia-backed militants in eastern Ukraine ranged between 37 on Monday, May 15 and 57 on Friday, May 19. The average number of enemy attacks against the Ukrainian positions last week decreased by 18% (from 56 to 46 truce violations per day) compared to the previous week. Similarly, the share of heavy weapons use by the Russian proxies decreased by 9 %, while the average daily number of fired rounds remained unchanged (up to 250 a day).

Enemy sniper activity decreased as well – 7 during last week compared to 12 in the prior week. “Russia-backed militants continued strengthening their positions by constructing engineering reinforcement in areas of major hostilities: at Svitlodarsk, in Avdiivka with its adjacent areas and in the south of the Mariupol sector”, stated Vilyen Pidgornyy, Ministry of Defense spokesperson during a press briefing at Ukraine Crisis Media Center.

The situation in the sector was rather intense throughout the week as Russia-backed militants increased the intensity of fire, occasionally using cannon artillery and MLRS Grad. Militants fired heavily at Ukrainian positions near Krymske, Popasna area and Troitske. “On May 16, for the first time in weeks Russia-supported militants opened mortar fire against Triokhizbenka and Kriakivka. On May 19, the enemy fired 20 Grad missiles against Troitske. The same day, militants opened fire with 122 mm artillery at Ukrainian positions in the area of Popasna. On May 20, just after midnight Russia proxies opened fire with 152 mm artillery against Troitske and Novozvanivka”, Mr.Pidgornyy said. Last week, the daily number of cease-fire violations by the enemy ranged between 5 (on May 18) and 15 (on May 19).

The most intense fire was registered near Avdiivka. On May 16, enemy initiated a four-hour complex fire against Avdiivka using tanks and mortars of various calibers. On May 18, militants opened artillery fire at Avdiivka, having discharged 30 shells. “The tensest situation in the Donetsk sector was registered on May 20 when the militants launched a 5-hour mortar barrage against Avdiivka. In total, militants fired more than 200 rounds and shells that day”, MoD spokesperson stated. Last week, the daily number of cease-fire violations by the enemy ranged between 12 (on May 16) and 24 (on May 21).

Last week, hostilities unfolded in Krasnohorivka – Novotroitske and on the Pavlopil – Shyrokyne parts of the front line. On May 16, militants launched a mortar barrage against Ukrainian positions near Krasnohorivka, having fired more than 50 rounds. On May 18 and 19, militants used 122 mm artillery against Shyrokyne multiple times. Last week, the daily number of cease-fire violations by the enemy ranged between 12 (on May 15 and 20) and 26 (on May 19).

The intensity of enemy air reconnaissance increased and accounted for 23 episodes of hostile drones flights registered in the area of the contact line. In comparison, a week earlier, Ukrainian troops registered 16 episodes of hostile drones conducting aerial reconnaissance in this area. The vast majority of enemy military intelligence efforts were focused on Avdiivka locality.

Last week, Russia continued to supply its proxies with weapons and ammo in eastern Ukraine. Ukrainian intelligence recorded the delivery of about 780 tonnes of fuel to the militant-controlled territories.

Ukrainian Armed Forces did not incur any combat fatalities last week. “Still, 26 Ukrainian soldiers were wounded in action throughout the reported period. It is worth noting, on Tuesday, May 16, Ukrainian Armed Forces did not incur any combat losses at all”, Mr. Pidgornyy said. The hostile actions of the enemy last week continues to impact the lives of the civilians living in the frontline areas. On May 21, in Talakivka village in the Mariupol sector a tractor ran over a mine. As a result, the driver suffered concussion.

Ukrainian authorities arranged for access and safe passage of one truck with humanitarian aid for civilians living in the occupied territory of eastern Ukraine. More than 400 kilograms of medicine were provided by the International Committee of the Red Cross.