The situation remains the most restless in Kamianka-Avdiivka-Shakhta Butovka area. “Opytne was another flashpoint on the frontline yesterday.  Militants shelled it with “Grad” MLRS between 19:00 and 20:00. They also shelled Shakhta Butovka position with Grad-Partizan rocket launcher once,” reported Ukrainian Ministry of Defense spokesman on ATO Colonel Oleksandr Motuzyanyk at a press briefing at Ukraine Crisis Media Center.  Russian proxies attacked several times near Avdiivka using light weapons and mortars. They were actively shelling Ukrainian troops with mortars since 18:00 until midnight there, firing a total of around 110 mortar shells. “The enemy also used various grenade launchers and mounted APC weapons,” said Col. Motuzyanyk. Militants also mortar shelled Luhanske and Verkhniotoretske twice between midnight and 18:00. 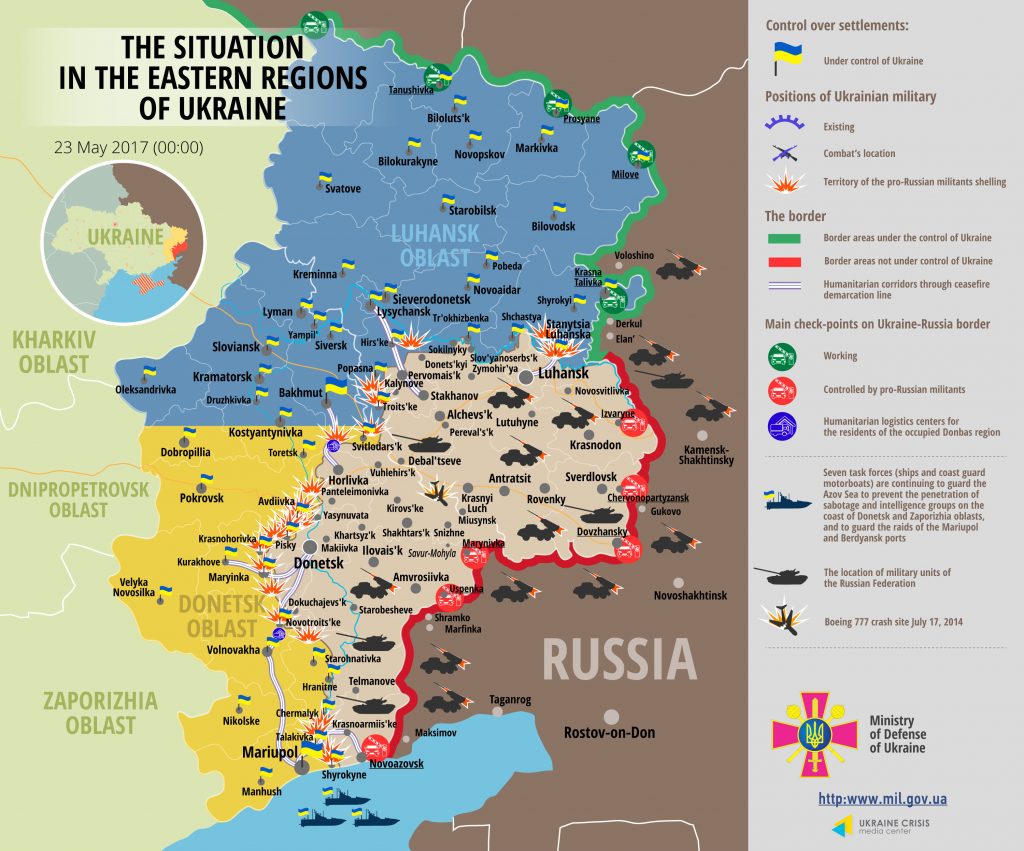 In Luhansk sector hostilities started at night. Militants conducted three attacks at Novotoshkivka, Novozvanivka and Troitske between 04:00 and 07:00. “Except for one brief sniper attack at Valuiske just after the midday, the ceasefire held along the entire frontline until evening. Attacks resumed at 20:00, when militants attacked Stanytsia Luhanska and its outskirts with small weapons and Malynove with grenade launchers,” informed the spokesman. In total, militants carried out nine attacks in Luhansk sector yesterday.

In Mariupol sector hostilities continue in Pavlopil-Shyrokyne frontline, as well as in Maryinka and the north of Volnovakha districts. Russia-backed militants shelled Hnutove with mortars and artillery around 11:00. Another armed provocation involving mortars took place in Novotroitske, and two more in Krasnohorivka. “Around 18:00 militants conducted medium intensity attack at Pavlopil. In total, the enemy conducted 29 attacks in Mariupol sector yesterday, four of them involved heavy weapons,” added the spokesman.

Ukrainian Armed Forces incurred no fatalities, but four servicemen were wounded in action.

Report on the military developments as of May 22  is available here. Interactive data on the shelling: chronology shelling chart and the interactive map.