In Donetsk sector main hostilities continue in Kamianka-Avdiivka-Shakhta Butovka frontline. “Militants shelled Ukrainian positions and Avdiivka’s residential quarters with ‘Grad’ MLRS around 16:00. Over ten private houses are reported damaged at the moment. One civilian sustained a head injury and was taken to hospital. Monitors of JCCC, State Emergency Service officers, police and medical personnel are working at the scene,” reported Ukrainian Ministry of Defense spokesman on ATO Colonel Andriy Lysenko at a press briefing at Ukraine Crisis Media Center. Militants were also shooting from tank and mortars from Yasynuvata towards Avdiivka at dawn. They fired over 50 mortar and 10 artillery rounds near Avdiivka by the end of the day. “Militants’ attacks at our positions in Donetsk sector were also recorded on the outskirts in Verkhniotoretske, Zaitseve, and near Pisky. The enemy used mortars in the two latter cases. In total, militants attacked 13 times in Donetsk sector yesterday, using heavy weapons nine times,” added Col. Lysenko. 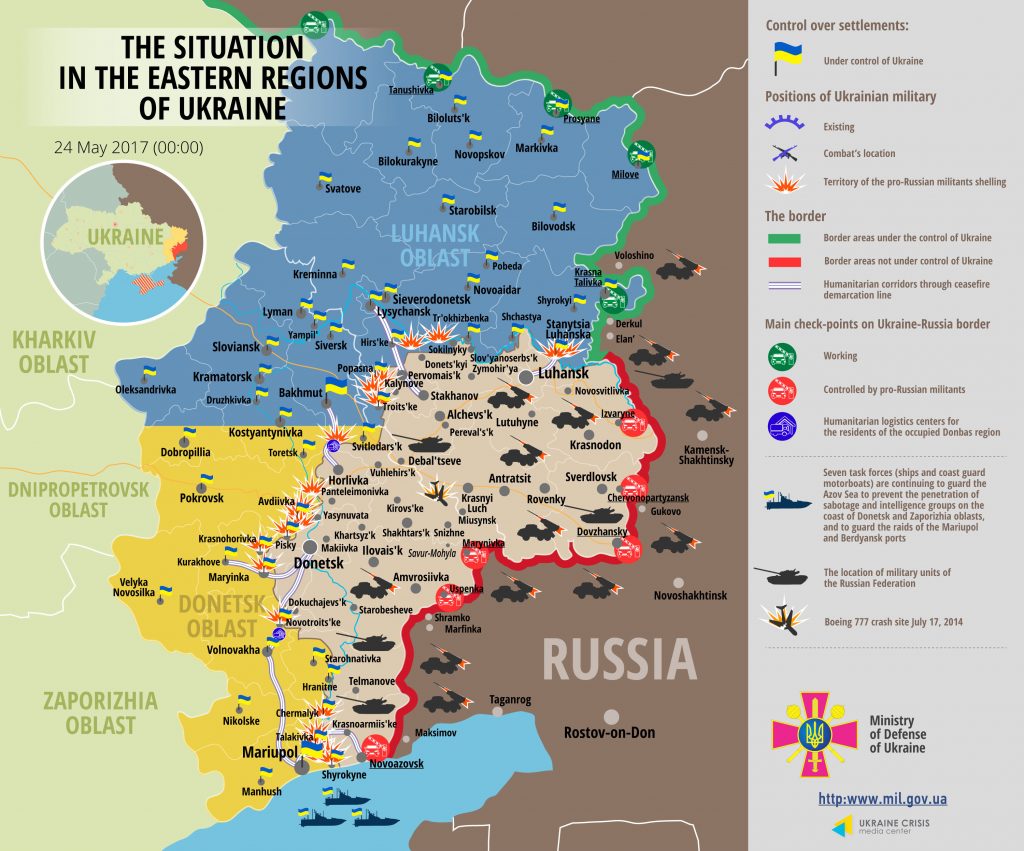 In Mariupol sector Russian proxies attack in the south 24/7 and sporadically use mortars. “Russia-backed militants were active only during the day, randomly shelling ATO troops’ positions with mortars. Enemy snipers were active in this area, moreover, the enemy conducted one armed provocation near Dokuchaevsk,” informed the spokesman. In total, militants violated the ceasefire 29 times in Mariupol sector yesterday, using mortars in six incidents.

No Ukrainian serviceman was killed in action yesterday, but one was wounded.

Report on the military developments as of May 23  is available here. Interactive data on the shelling: chronology shelling chart and the interactive map.