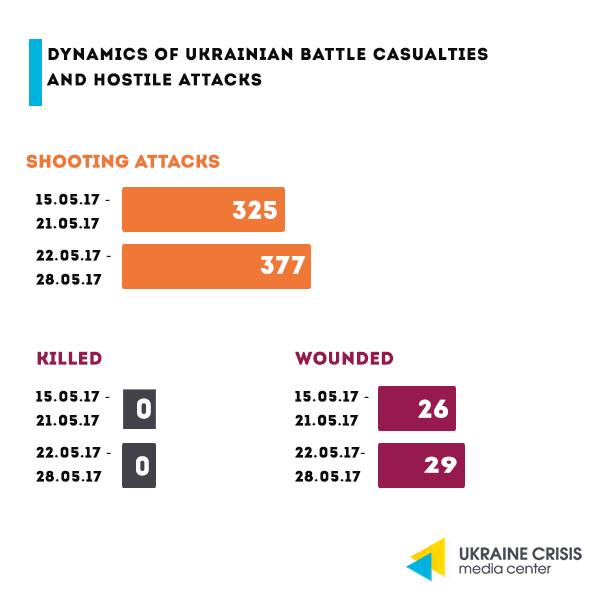 The situation in the combat zone remains extremely tense.
Attacks upon the residential blocks of peaceful towns. On May 28 militants were shelling government-controlled Krasnohorivka with Grad, tanks and mortars for three hours. According to the Head of the Police Office in Donetsk region Vyacheslav Abroskin, four civilians were wounded. Hospital was damaged as a result of the attacks, personnel and patients were evacuated. School and 29 more buildings were also damaged. Militants fired from the outskirts of Donetsk. On May 25 the central hospital in the nearby Maryinka was severely damaged, when the attack took place people were inside the hospital. 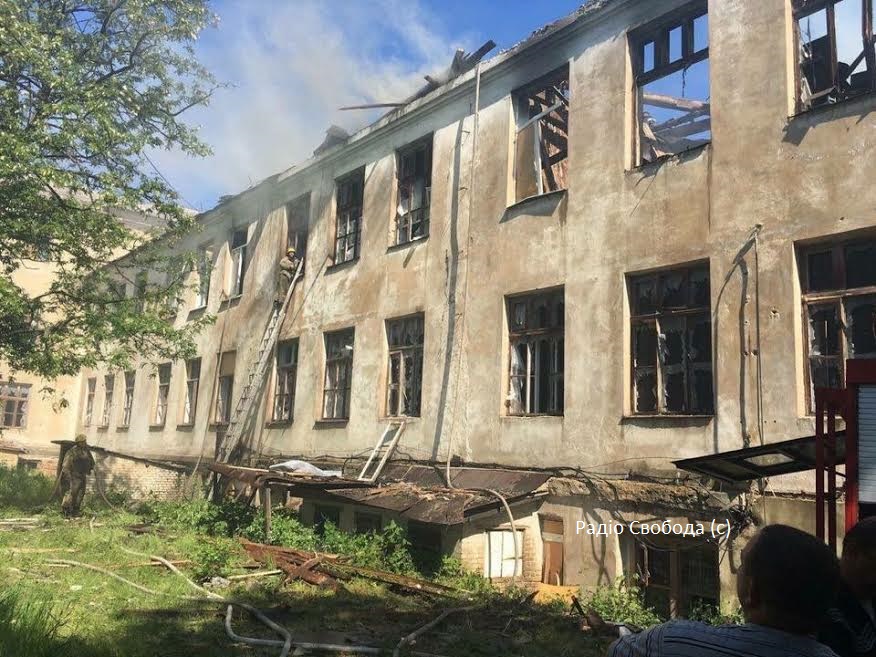 World’s most expensive vehicle. Car magazine “TopGir” published a photo of the luxury SUV Bentley Bentayga with a car plate of the “DPR” organization recognized illegal in Ukraine. Media put forward a hypothesis that the same Bentley Bentayga had been spotted in Donetsk back in autumn 2016. However, that vehicle had a German car plate. Bentley Bentayga is considered to be the most expensive and fastest serial SUV in the world. The car’s basic version costs $300-350 thousand. 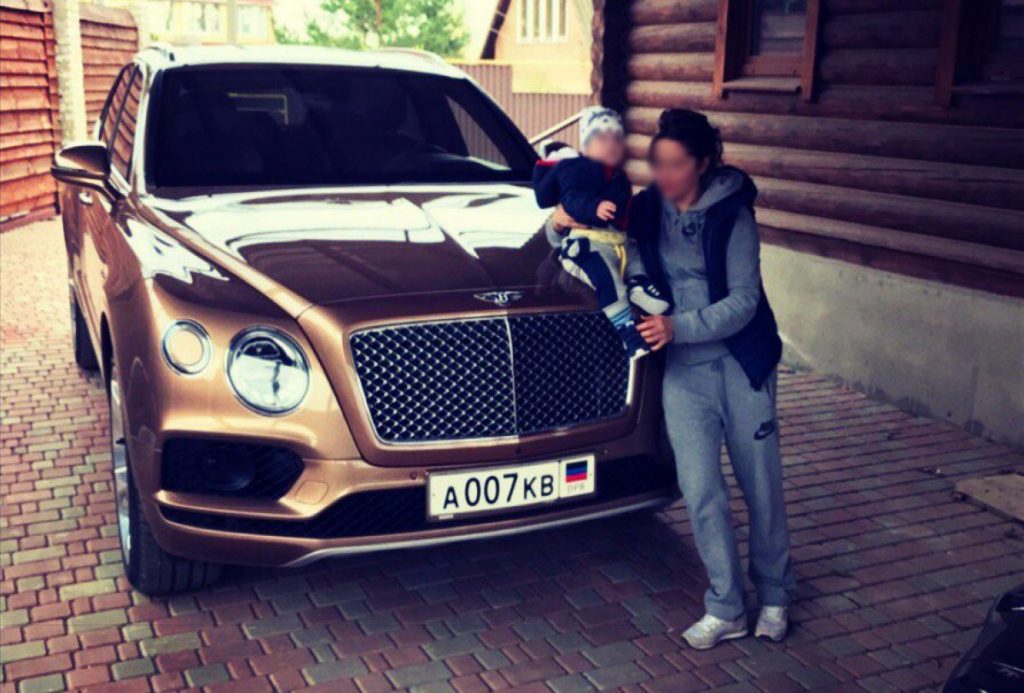 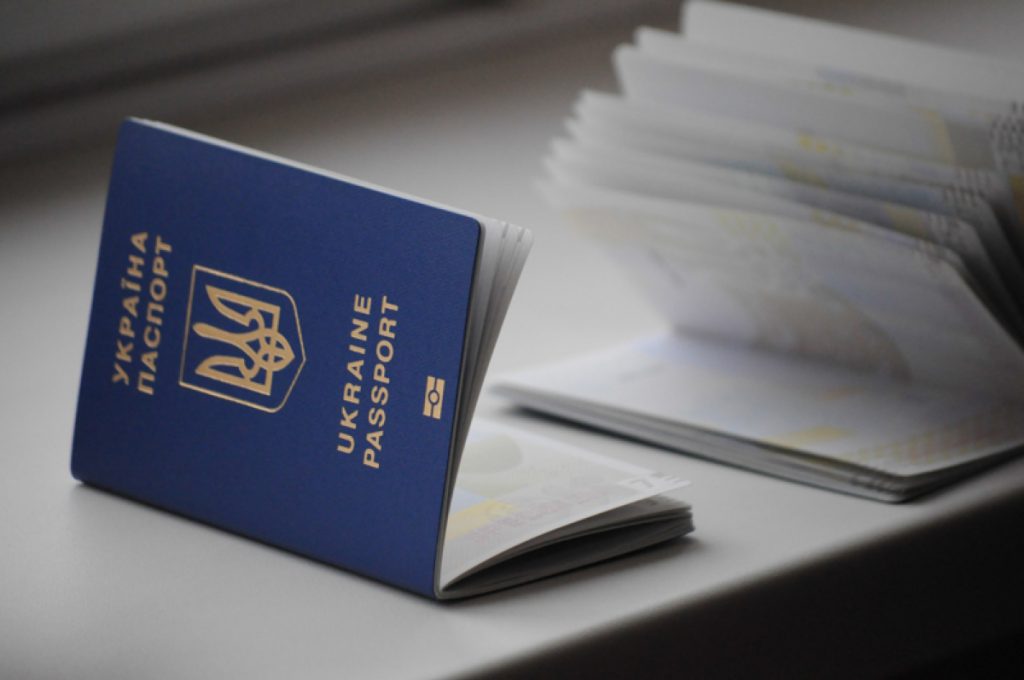 Fight for the anticorruption auditor

Ukrainian chosen instead of international experts. The government has chosen their representative to the post of the National Anticorruption Bureau (NABU) auditor. Mykhailo Buromenskyi, PhD in Law, president of the Institute of Applied Humanitarian Research, won the competition. Other 11 contestants included Giovanni Kessler, Carlos Castresana and Martha Boersch. Buromenskyi was recommended for the post by the Ukrainian Helsinki Human Rights Union, OSCE in Ukraine and GRECO. Professor Buromenskyi is head of the international law department at the Yaroslav Mudryi National Law University. He is also member of the Constitutional Commission under the President of Ukraine and of the working group on decentralization. The newly appointed auditor served as an ad hoc judge of the European Court of Human Rights between 2009 and 2012, in May 2012 he became a member of Ukraine’s Constitutional Assembly. 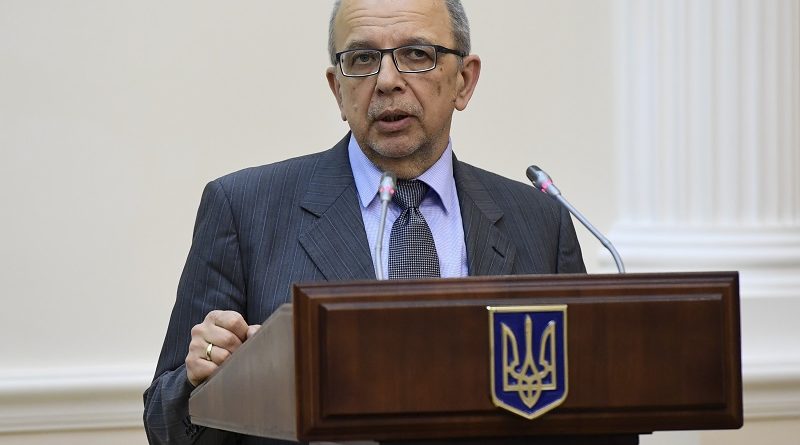 Civil society is disappointed with the fact that the government has chosen a Ukraine national, as it creates a possibility to exercise pressure upon the auditor. Civic actors also note the lack of work experience by Buromenskyi in law enforcement agencies abroad – that was actually one of the requirements for the future auditor that the International Monetary Fund (IMF) put forward (the IMF memorandum in English). Daria Kaleniuk, Head of the Anticorruption Action Center, is of the opinion that the move puts an end to the independent nature of the NABU.

According to the Law on the National Anticorruption Bureau, the Parliament (Verkhovna Rada) and the President are yet to appoint their auditors.

Prosecutor General’s one year in office 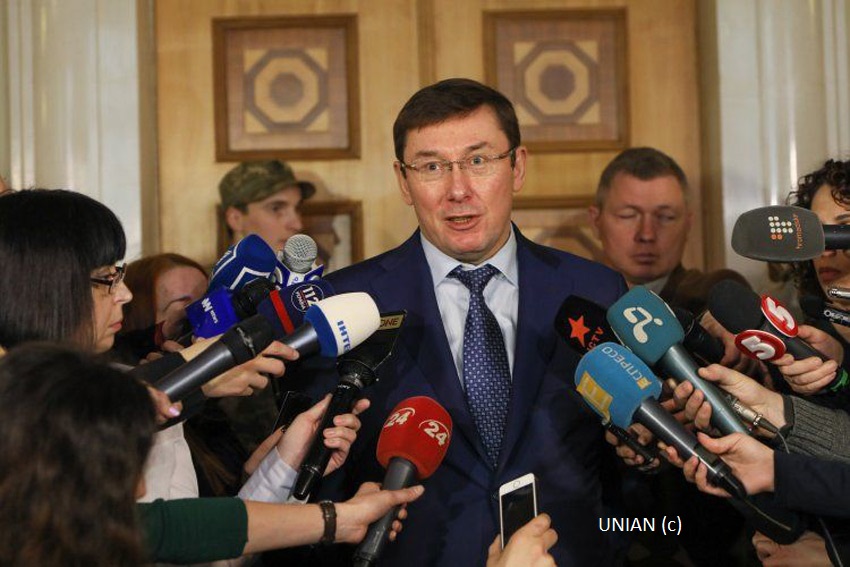 Yuriy Lutsenko reported to the Parliament (Verkhovna Rada) on his year in office as the Prosecutor General of Ukraine. He named the court proceeding over Ukraine’s former president Viktor Yanukovych his main achievement. Lutsenko also provided updates on how investigation into the crimes against the Maidan is advancing as well as on the amount of money that the Office of the Prosecutor General had returned to the state this year (UAH 52 billion, an equivalent to approx. EUR 1,8 billion). He also noted that 200 hectares of land are being returned back into public possession daily. Lutsenko reported that the number of personnel had been reduced by one quarter and that the new staff members were selected through an open competition, while the majority of them have never been part of the agency. Sixteen persons of Yanukovych’s inner circle have been convicted, court proceeding is on against other 32 ones. In the Maidan-related cases 228 persons have been charged and 42 convicted.

In their turn, journalists and experts noted that the Office of the Prosecutor General had not dismissed the key staff members seen involved in the corrupt schemes and had not advanced in investigating into the case of the murder of journalist Pavlo Sheremet. Moreover, no drastic reforms had been held. A week before the Prosecutor General presented his report, MP Yegor Sobolev said he started collecting signatures in support of Lutsenko’s resignation. In his opinion the key investigations of the agency have failed while those that have been completed are an imitation. 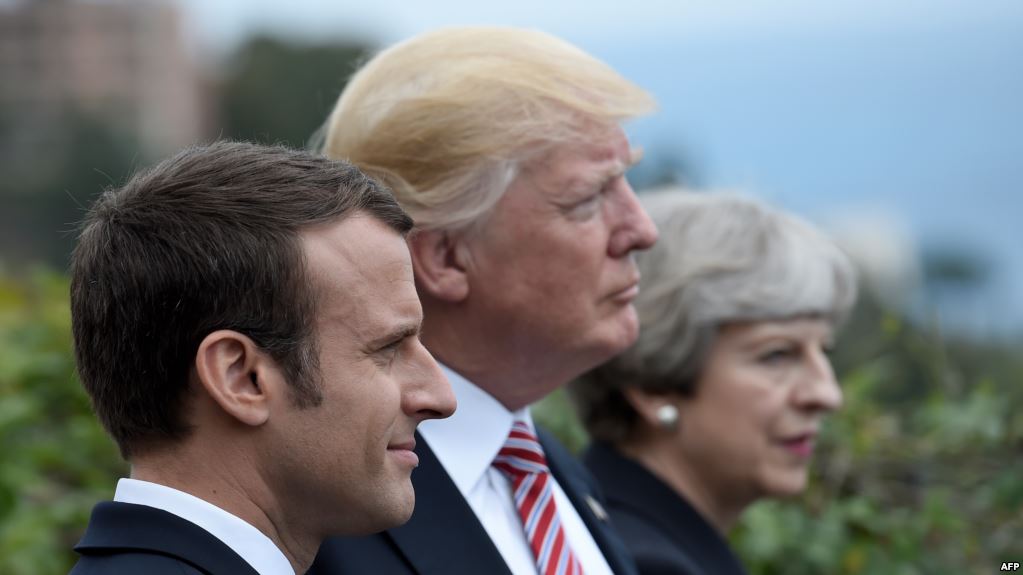 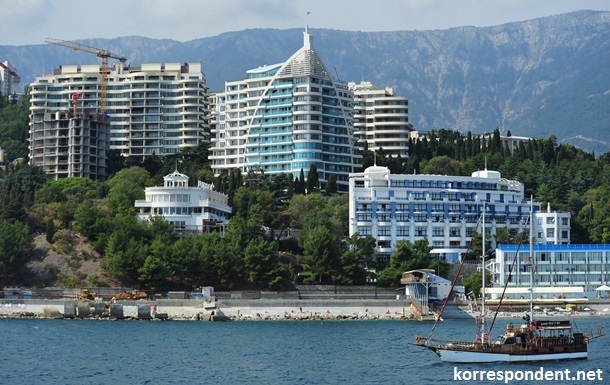 Crimean de-facto officials keep putting on sale “nationalized” property. They are in try to cover the gaps in local budget with the real estate seized from former owners. On May 24, the Russia-controlled Crimean parliament approved another list of objects to be privatized. They are about two dozens of sites located in the near-sea areas.

Two resort facilities – “Gorska” (on the western coast) and “Morsky Bereh” (“sea coast”, on the eastern coast) as well as the rehabilitation center “Nadiya” (hope) near Feodosia are planned to be put on auction. Cost estimate of the objects to be privatized is 236 million rubles (approx. EUR 3,74 million). “It is planned to direct 200 million rubles for reimbursement payments, while 36 million rubles – to the state budget,” reads the statement of the Russia-controlled Crimea government. Two years ago, Sergey Aksyonov, self-proclaimed prime minister of Crimea was offering the investors to lease the abovementioned objects for 1 ruble.

On May 23, the Ukrainian Parliament (Verkhovna Rada) passed the law that sets the mandatory 75 per cent quota of Ukrainian-language content on nationwide TV channels. According to the law the shows, films and news programs in Ukrainian need to make up for at least 75 per cent of the overall broadcasting length of the programs and films between 7 a.m. and 10 p.m.. Local television channels need to maintain their Ukrainian-language broadcasting at least up to 60 per cent.

According to the monitoring made by the national regulator some nationwide TV channels (Inter, Ukraina) broadcast in Ukrainian only one fourth of their content. Approval of the law became the next step in implementation of the state policy set to reinforce the position of and to legally protect the state language in the media. Earlier, in November 2016, the law introducing quotas on the radio for songs and programs in Ukrainian came into force.

Culture: spaces of the industrial city become locations of the media art festival

On June 3-11 the city of Dnipro will host for the fourth time the festival of new media and audiovisual art in urban space “Construction Festival”. The organizers – local NGO Kultura Medialna, will present visual and media art, music, urbanism projects etc. in the city’s non-specialized public spaces and buildings, thus granting them a new meaning and role. Over the past three editions over 30 locations were engaged and rediscovered including the railway station Pivdenny (southern), planetarium, aquarium, botanical gardens, the hall of organ and chamber music, former Illicha house of culture, Volodarsky factory etc.

This year one of the eight locations of the festival – “Stsena” (stage) at the Shevchenko park, is being constructed jointly by the “Construction Festival” team and a group of Polish, Danish, Swedish and British architects and urbanists. The musical program will include experimental concerts and a boat party featuring musicians from the Czech Republic, Poland, Germany, Sweden, Lithuania and Ukraine. Students’ Palace, Museum of Arts and Artsvit gallery will become platforms to showcase Israeli, Swedish and British video art. Artistic residence Civic Media Lab is to unite media artists from Eastern Partnership countries and from Germany. 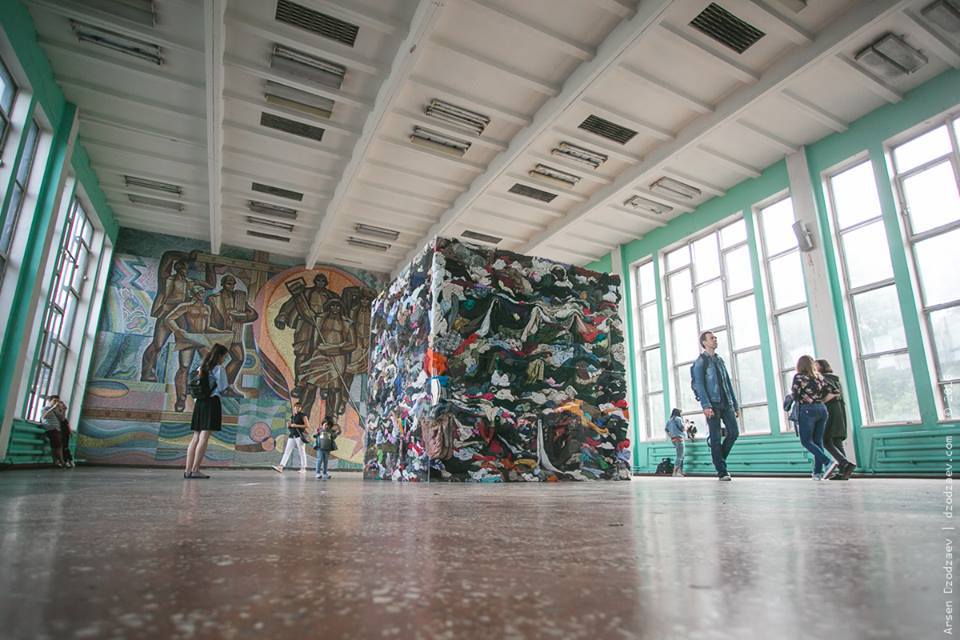 “Meet the orphans of the war in eastern Ukraine” – Hromadske International

”Language quotas in Ukraine : Are the print media next in line?” – the column of Taras Petriv for UNIAN

”Ukraine and NATO: 20 years nearby. But not together” – The Day

“Auditoor of the National Anticorruption Bureau, one year in office of the Prosecutor General, arrests in Moldova” – the Sunday Show by Hromadske International