Active hostilities continue along the Bakhmut road in Luhansk sector. Militants used mortars and barrel artillery in the morning and evening. “They fired about 90 mortar and artillery rounds at the Ukrainian positions in Krymske – Novotoshkivske frontline. Russian proxies conducted artillery fire from close range, confirming the information about a large number of heavy weapons deployed by the enemy at the frontline,” reported Col. Andriy Lysenko, Ukrainian Ministry of Defense spokesperson on ATO, at a press briefing at Ukraine Crisis Media Center. 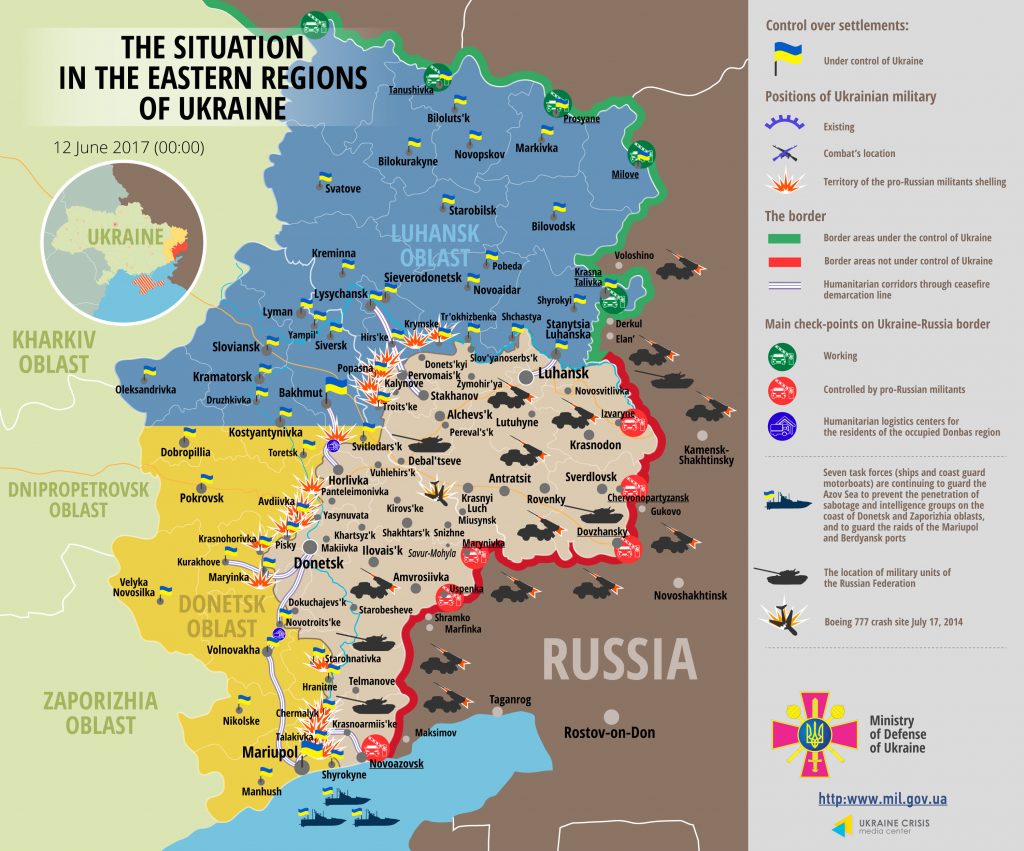 After 19:00 Russia-backed militants used small arms and armored vehicles in Popasna district. They used mortars in Katerynivka, Popasna and Troitske. There were no hostilities in ​​the frontline from the Russian border to Trokhizbenka. Overall, militants conducted 23 attacks in Luhansk sector, and nine of these involved heavy weapons.

In Donetsk sector, the situation is tense at Kamianka – Avdiivka – Shakhta Butovka position frontline. Militants started attacks after 17:00 and did not cease them until late evening. The enemy actively used mortars and tanks firing over a hundred rounds. In Avdiivka militants’ attack damaged a house and a car. Thankfully, the owners of the house were not injured. Moreover, the enemy conducted a series of attacks near Horlivka and in Pisky, repeatedly using grenade launchers. Just after midnight Russia-backed militants shelled Olhynka and Hrafske (Volnovakha district of Donetsk region) from Dokuchaievsk. In Olhynka the shelling damaged a whole street, 12 private houses. People spent the whole night in basements. In Hrafske the attack damaged the dormitory of the Forestry College. Fortunately, no student was injured. “Over the past day militants conducted 22 attacks in Donetsk sector, and used heavy weapons in 11 of them,” reported the spokesman.

Two Ukrainian servicemen were killed and four were wounded in action yesterday.

Report on the military developments as of June 11 is available here. Interactive data on the shelling: chronology shelling chart and the interactive map.