Militants carried out 66 attacks, 24 of them – with heavy weapons in ATO zone yesterday. In Donetsk sector the past day began with intensive tank and artillery shelling on Ukrainian positions in Avdiyivka. Almost at the same time – at about 1 am – militants fired 20 artillery shells on the Ukrainian fortifications in Svitlodarsk arc area. The adversary also fired 20 mines on Avdiyivka industrial zone and in Novhorodske, reported Col. Oleksandr Motuzyanyk, Ministry of Defense of Ukraine spokesperson on ATO-related issues, at a briefing at Ukrainian Crisis Media Center. “Yesterday the adversary often resorted to armed provocations – militants fired from small arms across the front line area except the Donetsk airport,” he added. 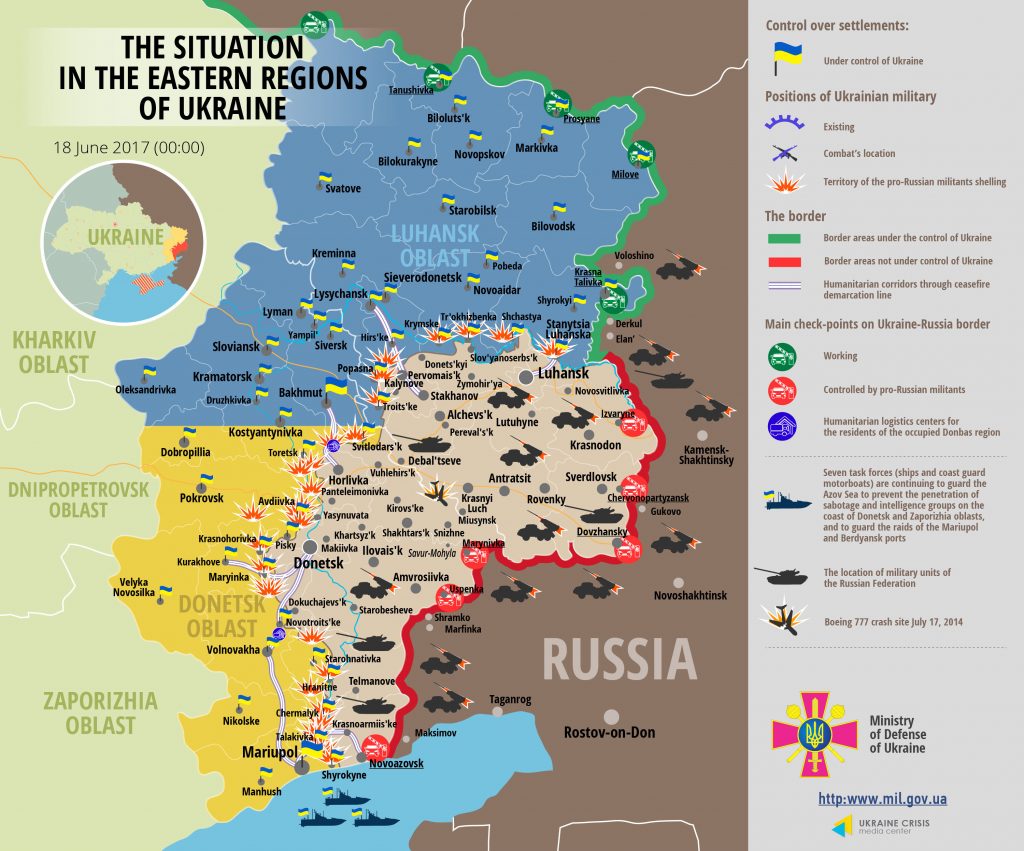 In Mariupol sector, militants continue shelling residential areas in frontline towns and villages with heavy weapons. “Yesterday at 5:40 pm militants fired mortar shells near the village of Berdyanske close to Mariupol. Several houses were damaged. One of them was seriously damaged: the roof and ceiling were destroyed. Another house caught fire,” said Col. Motuzyanyk. Militants carried out powerful artillery and mortar attacks in Granite and neighboring Novoselivka Druga. In Shyrokyne, militants carried out short-term mortar attacks and opened fire from the tank three times. They used light weapons from Krasnohorivka to the southernmost frontline section.

In Luhansk sector, the extremely tense situation was near Bakhmut road and Popasna, where militants used mortars. “Each of more than 10 such episodes of the use of prohibited weapons by militants came with opening fire with grenade-launchers, machine guns and armored vehicles,” informed Oleksandr Motuzyanyk. Militants carried out two attacks near Schastia and two in Stanitsia Luhanska. In Staryi Aidar, which is located near Schastia, they opened mortar fire.

No Ukrainian military was killed as a result of combat operations over the past day; five servicemen were wounded.

Report on the military developments as of June 17 is available here. Interactive data on the shelling: chronology shelling chart and the interactive map.