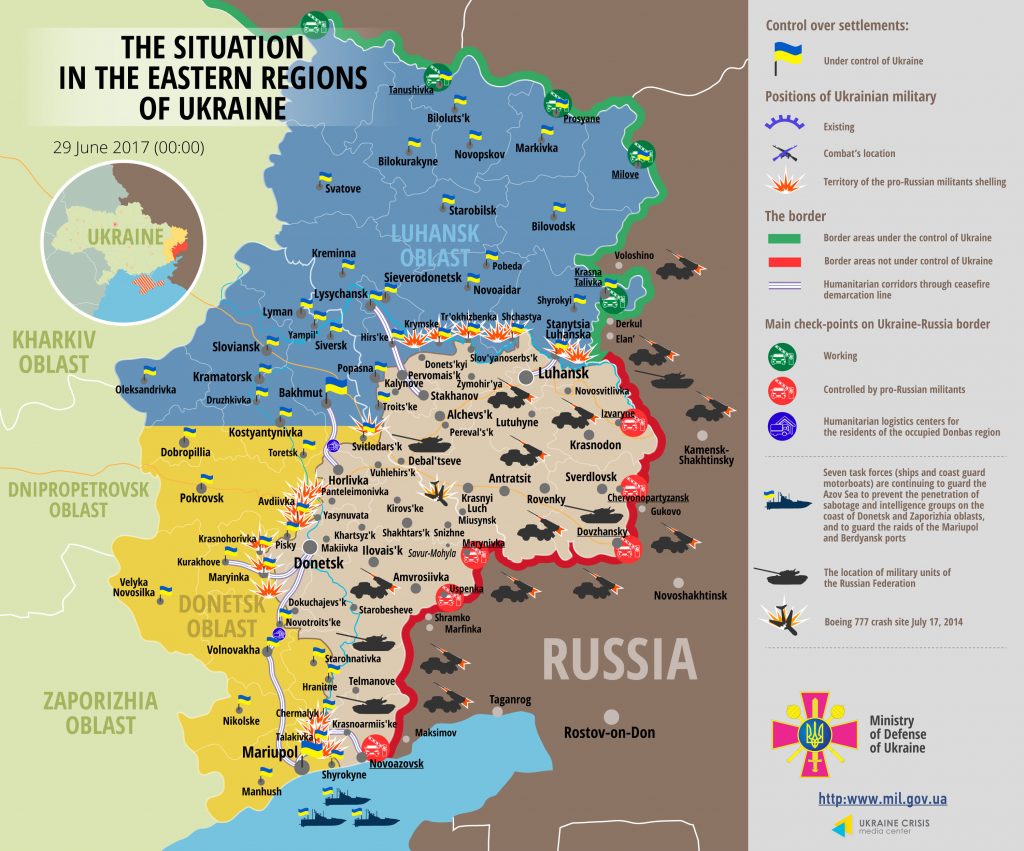 Militants continued shelling Ukrainian troops’ positions with heavy weapons, regardless of the recent agreements on the ceasefire from June 24 for the period of active farm operations. “The level of the enemy’s use of heavy weaponry yesterday exceeded the average figures of the previous week,” added Col. Motuzyanyk.

In Luhansk sector, the situation escalated along the Bakhmut road. Most active hostilities took place near Krymske. “Militants conducted one brief mortar provocation there and opened intense mortar fire from at least two directions after 19:00. During a series of attacks that lasted till 21:00, Russian proxies fired almost 150 mortar shells of various calibers,” said the spokesman. Two more mortar attacks were recorded in the adjacent Triokhizbenka and Shchastia. In Luhansk sector 15 militants’ attacks took place, six incidents involved mortars.

The smallest number of ceasefire violations was recorded in Mariupol sector. Militants conducted brief mortar provocations in Pavlopil, Hnutove and Lebedynske. The most intense attack took place in Maryinka where militants fired 15 mortar rounds. “Residential quarters of Krasnohorivka came under militants’ fire around 15:00 during Russian proxies’ attack on Ukrainian positions. One projectile exploded in the territory of Krasnohorivka school No.1 in Soniachnyi residential district. The enemy was shooting from western outskirts of the temporarily occupied Donetsk. There were no civilian casualties,” informed Col. Motuzyanyk. In total, militants attacked nine times in Mariupol sector, more than a half attacks involved mortars.

Report on the military developments as of June 28 is available here. Interactive data on the shelling: chronology shelling chart and the interactive map.