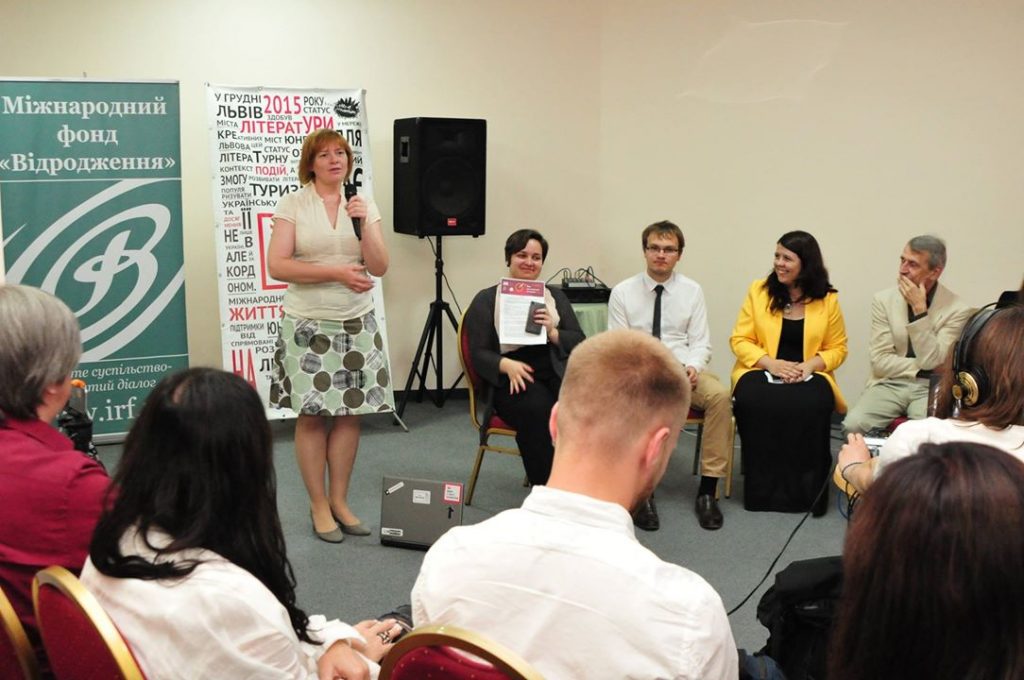 «We didn’t believe that 83rd PEN International Congress will take place in Lviv until the last minute of September last year. We have worked on this idea for two years, every country would be happy to host this event. There were powerful competition and resistance – you know from which side, but we succeeded and received this right, which imposes both honour and responsibility» – informed programme director of the Congress, President of Ukrainian Centre of PEN International Mykola Riabchuk during the press conference in Premier Hotel «Dnister» in Lviv.

In addition, Mykola Riabchuk noticed that during the discussion about host city of the Congress, Lviv was chosen as Ukrainian Capital of Culture, which has a proper experience and capacity to host an event of such level.

Olha Mukha, Board Coordinator of 83rd PEN International Congress, head of the Project Office «Lviv – UNESCO City of Literature» pointed out that there is no more appropriate place to host the Congress than Lviv as it already is not only a City of Literature both of UNESCO (since December of 2015) and Ukraine, but also a shelter for displaced persons from Crimea or Eastern part of Ukraine. Mrs. Mukha also noted that Congress programme combines diplomatic (closed) and literary (open for public) programs, so she invited everyone to take active part in open cultural events reminding that September in Lviv this year will be richer with literary presentations than ever.

«We are very happy with the fact that the Congress will take place in Ukraine, particularly in Lviv, and have pleasant cooperation with Ukrainian PEN Centre and the team of the Congress, including the Office of the City of Literature and the City Council» – added Kätlin Kaldmaa, International Secretary of PEN International, President of Estonian PEN Centre during skype-call from Greece. Mrs. Kaldma mentioned the famous guests invited to the Congress: Nobel prize laureates Svetlana Alexievich and Herta Müller, nominee Adam Zagajewski and number of opinion-makers from more than hundred countries worldwide. She also noted an active partaking of Ukrainian authors who have already confirmed their participation: Serhiy Zhadan, Olena Styazhkina, Andriy Kurkov and other.

Andriy Moskalenko, deputy Mayor for Development, confessed, with the tongue in cheek, that he considers taking a leave of absence from his office for two weeks just in order to serve as a volunteer at the Congress to be closer to the exciting events. «It is important to use at most the possibility of being close to the people, who create the world today, whose books change the direction of development in whole countries», – underlined Andriy Moskalenko.

In July, we shall announce officially our call for volunteers on the Congress Facebook page, – told Bogdana Brylynska, partnership Coordinator of 83rd PEN International Congress in Lviv, main specialist of cultural industries section of the office for culture of the department of development of Lviv city council. Ms. Brylynska informed about opening of the delegates’ registration for the Congress and launching of info page and also pointed out a motto «When truth comes true», which fully reflects idea of the Congress in Ukraine, the country that struggles to develop democracy and strengthen civil society despite the ongoing foreign aggression.

«We expect more than 200 delegates from all over the world coming in Lviv. It is not so many as came to Euro-2012 football cup or to the Eurovision contest this year but it is strategically important public. It’s a chance we have to use in order to present ourselves, to hear and understand others», – argues Mykola Riabchuk. «Many writers are persecuted and imprisoned around the world, not to mention harsh censorship and publication bans. We all know about the destiny of Oleg Sentsov… Mykola Semena, member of the Ukrainian Centre of PEN International is in critical situation. These and other issues will be reviewed at the Congress».

Olha Honchar, PR and communication Coordinator added about the character of the Congress: «PEN-Club is an international organization with almost 100-years history and was established to help writers in times of trouble». Important part of the Congress might be inclusion Lviv to the ICORN network, which protects writers, poets, artists, musicians, human right activists and publishers that are at risk, defends freedom of expression, democratic values and supports the development of international solidarity.

«We must learn to hear others, because if we don’t, if we fail to prove our empathy and solidarity with other people, we cannot we cannot expect much understanding of our problems from the international community.

So, I want to draw your attention to the need of being attentive to others, and don’t complain that we are not heard and not understood if are not able to reciprocate» – summarized Mykola Riabchuk.

«Culture and cultural values can help us to find allies in all areas of activity. Due to the Congress Lviv can become the attraction centre for writers, but eventually many other creative communities can be created – artistic, business, civil. It will generate new activity and new responsibility».

On September 17-24, the city of Lviv will host the 83rd Congress of the PEN International. For a few days Ukrainian Capital of Culture will become a world centre of literary and intellectual discussions. The official theme of the 83rd PEN International Congress in Lviv is «Reclaiming Truth in Times of Propaganda».

PEN International is a reputable international non-governmental organization that unites, since 1921, professional writers, editors and translators committed to the protection of freedom of expression and celebration of literature. The membership of PEN International exceeds 25 000 persons from over 150 PEN Centres across the world. PEN International has consultative status with UNESCO and Special Consultative Status with the Economic and Social Council of the United Nations. It is one of the oldest human rights organizations and international writers’ organizations. Such famous authors as Joseph Conrad, Bernard Shaw, Herbert Wells were members of PEN Club, while John Galsworthy, Heinrich Böll and Mario Vargas Llosa were its Presidents.

Organizers of the 83rd PEN International Congress in Lviv :

83rd PEN International Congress in Lviv is already supported by:

Partners: Consulate of Republic of Poland in Lviv, Embassy of Canada