Russia-backed militants attacked the most in Donetsk sector, violating the ceasefire 12 times and using heavy weapons in five of the attacks. The majority of them took place in Svitlodarsk area. “Russia-equipped militants fired from a tank in Luhanske at the dawn, the attack continued for 20 minutes. Moreover, they attacked Troitske in the afternoon. The militants fired from mortars and mounted weapons before the sunset and from light arms after 23:00. The last attack continued one hour. Ukrainian troops returned fire,” reported Ukrainian Ministry of Defense spokesman on ATO Colonel Andriy Lysenko at a press briefing at Ukraine Crisis Media Center. 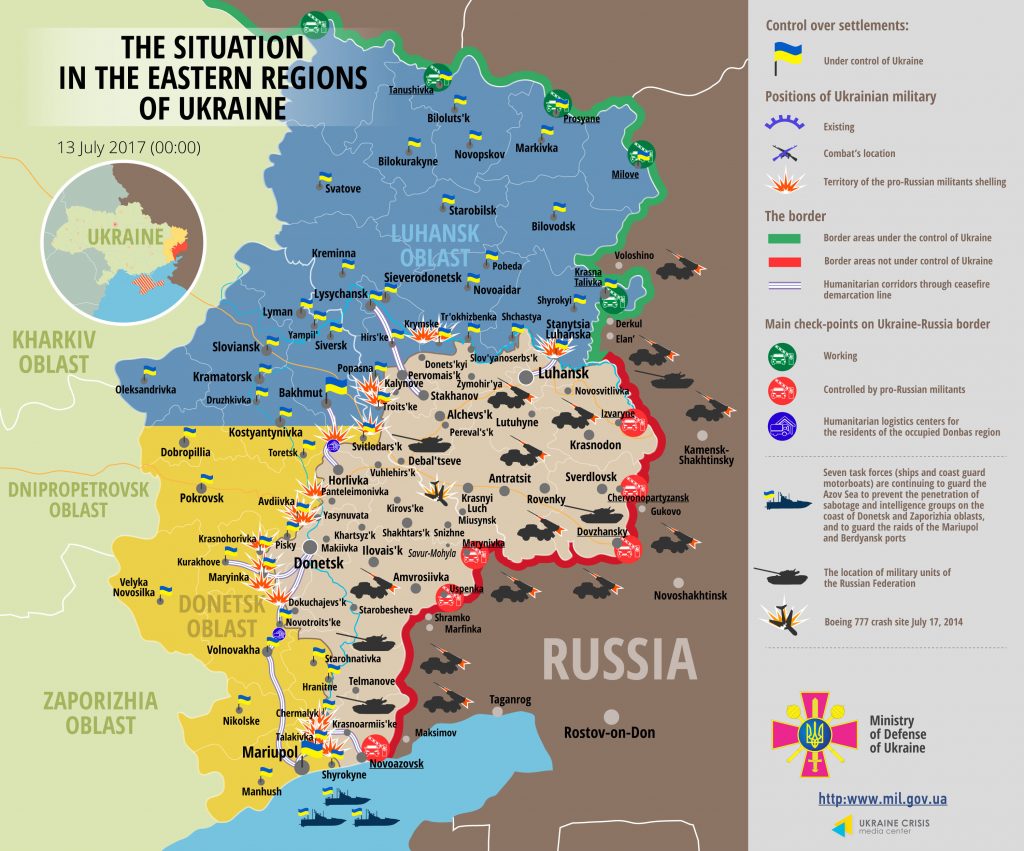 The militants violated the ceasefire eight times in Luhansk sector. They attacked Ukrainian positions in Krymkse with machine guns at 12:00 and conducted two small arms attacks after 20:00. Moreover, they conducted two attacks in Stanytsia Luhanska, firing five mortar rounds in one of the attacks. Another two short militants’ attacks took place in Novozvanivka in the afternoon.

In Mariupol sector the militants attacked ten times, using mortars in four incidents. They attacked Maryinka two times in the evening, damaging several houses in one of the attacks. In addition, Russia-backed militants used machine guns in Krasnohorivka area after 22:00 and in Novomykhailivka before the midnight, firing 10 mortar rounds in addition to machine guns fire. One militants’ attack took place in Berezove. “It was calmer than usual in the south of Donetsk region. The militants attacked four times in Pavlopil, Hnutove, Talakivka, not using heavy weapons” elaborated the spokesman.

One Ukrainian serviceman was killed in action yesterday, one more was wounded.

Report on the military developments as of July 12 is available here. Interactive data on the shelling: chronology shelling chart and the interactive map.