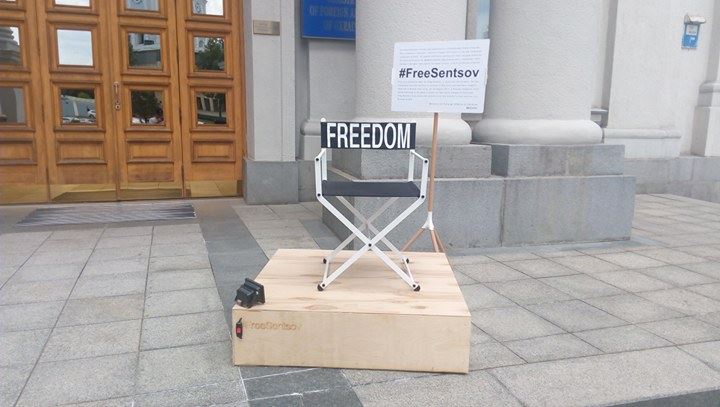 On July 13 Ukrainian film director Oleh Sentsov turned 41. It is his third birthday that Sentsov marks behind the bars in the Russian prison.

The director’s debut film “Gamer” was out in 2012. The movie was selected by the International Film Festival Rotterdam (The Netherlands), GoEast film festival in Wiesbaden (Germany) and by the Molodist International Film Festival in Kyiv. Sentsov did not have a chance to start production of his second film “Rhino” as the Maidan started in Ukraine. The film director was its active participant. In the end of February 2014, Sentsov was back in his native Simferopol, Crimea, where he joined the activists who were standing for the territorial integrity of Ukraine. On May 11, 2014, Sentsov was detained in Crimea by the Federal Security Service of the Russian Federation. The film director was charged with terrorism and illegal weapons possession. He was later transferred to Moscow to the Lefortovo detention center. In the materials of the fabricated case, he was called organizer of a terrorist subversive group.

In August 2015 the Russian court sentenced Sentsov to 20 years in a maximum security prison, in February 2016 he was transferred to Yakutia.

Representatives of the Ukrainian and international film community have addressed the Russian authorities calling to free Oleh Sentsov. Among them, there were the European Film Academy, film directors Pedro Almodóvar, Wim Wenders, Krzysztof Zanussi, Andrzej Wajda, Ken Loach etc. However to no avail.

The Ukrainian authorities, as well as the international community, are making each and every effort to bring the Ukrainian film director back home. On March 16, 2017, the European Parliament adopted the resolution on the Ukrainian prisoners in Russia and the situation in Crimea. The resolution lists 30 Ukraine citizens illegally held in prisons of the Russian Federation including Oleh Sentsov. [The summary is based on Ukrinform materials].

A series of actions to support the film director took place on his birthday. They included the initiative of Ukraine’s Foreign Affairs Ministry. The agency put an installation in front of its office in Kyiv – an empty film director’s chair as well as an information plate about the illegally detained Ukrainian. The Ministry launched a call to take pictures with the installation and post them on social media with the #FreeSentsov hashtag.

Civic activists of the “Solidarity Committee” (Comitet Solidarnosti) got together in the Mariinsky park, they installed the plate “Oleh Sentsov” on the director’s chair, brought a symbolic cake covered with barb wire and read out birthday greetings to the prisoner.

On this day Kyiv and Odesa hosted the screenings in support of the film director – those of the documentary “The Trial: The State of Russia vs Oleh Sentsov” by Russian film director Askold Kurov.