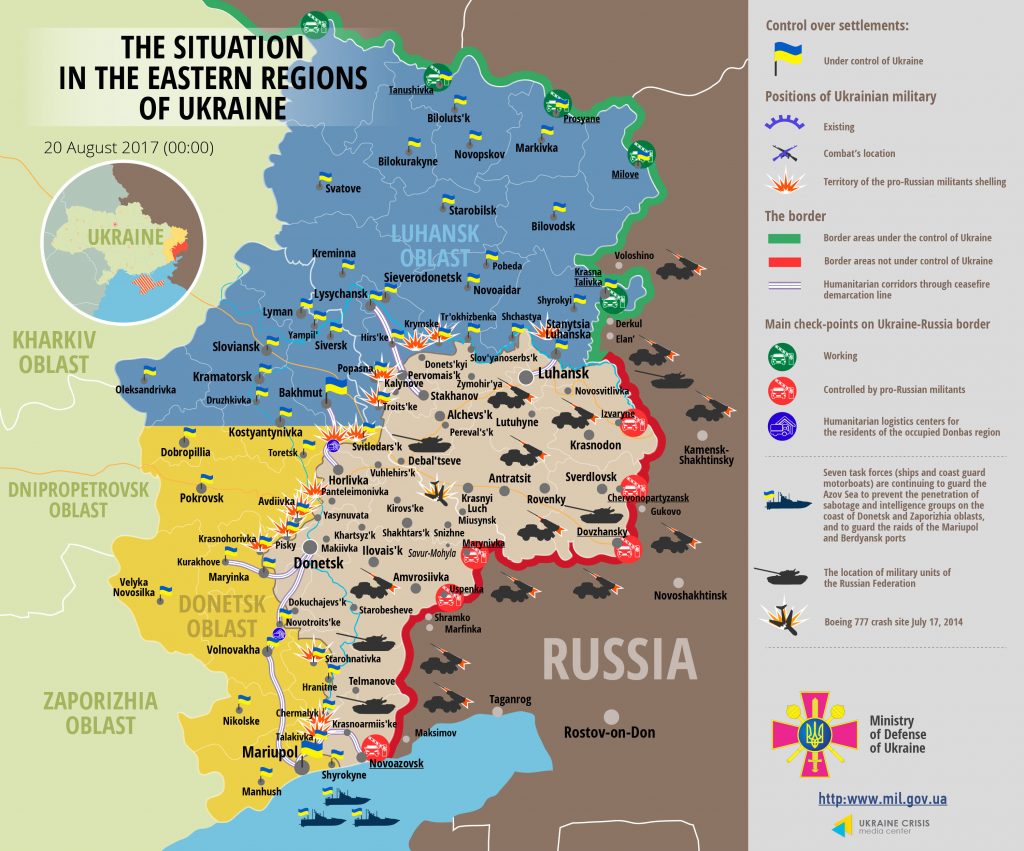 In Donetsk sector the situation remains the most restless in Avdiivka. “Militants continued shooting at our strongholds since the beginning of the day, using light weapons at first. Then the attacks intensified and the caliber increased. Militants were firing from mortars, tanks and armored weapons since 02:00 till the dawn. Following this, the ceasefire held till 17:00,” said Col. Motuzyanyk. Attacks at Avdiivka resumes later. “Nevertheless, the enemy used no heavy weapons till the end of the day, with the exception of seven mortar rounds militants fired at Avdiivka industrial area,” added the spokesman. One two-hour hostile attack happened in Kamianka after 20:00 yesterday.

“The situation was also restless in Svitlodarsk area,” said Col. Motuzyanyk. Militants violated the ceasefire three times near Novoluhanske. Each attack lasted up to 30 minutes. Militants were actively using mortars during ceasefire violations in the morning and in the evening. They fired only from light weapons in Horlivka perimeter, attacking Zaitseve with automatic firearms and Verkhniotoretske with various grenade launchers and machine guns. “Residential buildings came under hostile fire again in Zaitseve settlement. Luckily, there were no civilian casualties,” added the spokesman. Moreover, militants violated the armistice twice near Donetsk airport – at midday and after the sunset. In both cases militants used mortars, firing over 20 mortar rounds in total.

In Luhansk sector the situation was the most restless at Bakhmut road. In Krymske militants attacked Ukrainian positions four times, firing 20 mortar shells in one of the incidents. “Moreover, militants used mortars in the adjacent Novotoshkivske after the sunset. Another three ceasefire violations happened in Troitske, Novooleksandrivka and Malynove of Stanytsia Luhanska district. The enemy used light weapons each time,” added the spokesman. No Ukrainian serviceman was killed in action yesterday, but one soldier was wounded in hostile shelling at Bakhmut road.

Report on the military developments as of August 19 is available here. Interactive data on the shelling: chronology shelling chart and the interactive map.