Zaitseve and Avdiivka were main flashpoints in Donetsk sector yesterday. Militants started attacking after 18:00. “The most intense attack took place in Avdiivka’s industrial area; Russian proxies were shooting from the direction of Yasynuvata for more than three hours,” informed Ukrainian Ministry of Defense spokesman on ATO Colonel Oleksandr Motuzyanyk at a press briefing at Ukraine Crisis Media Center. “According to the Chief Intelligence Directorate of the Ministry of Defense, a Russian sniper unit armed with modern rifles arrived at Zaitseve area to reinforce militants’ so-called ‘3rd brigade’,” he added. Moreover, militants violated the ceasefire in Verkhniotoretske once. In total, six hostile attacks were recorded in Donetsk sector yesterday. In most cases, Ukrainian troops returned fire. The ceasefire held in Svitlodarsk and Donetsk airport areas yesterday. 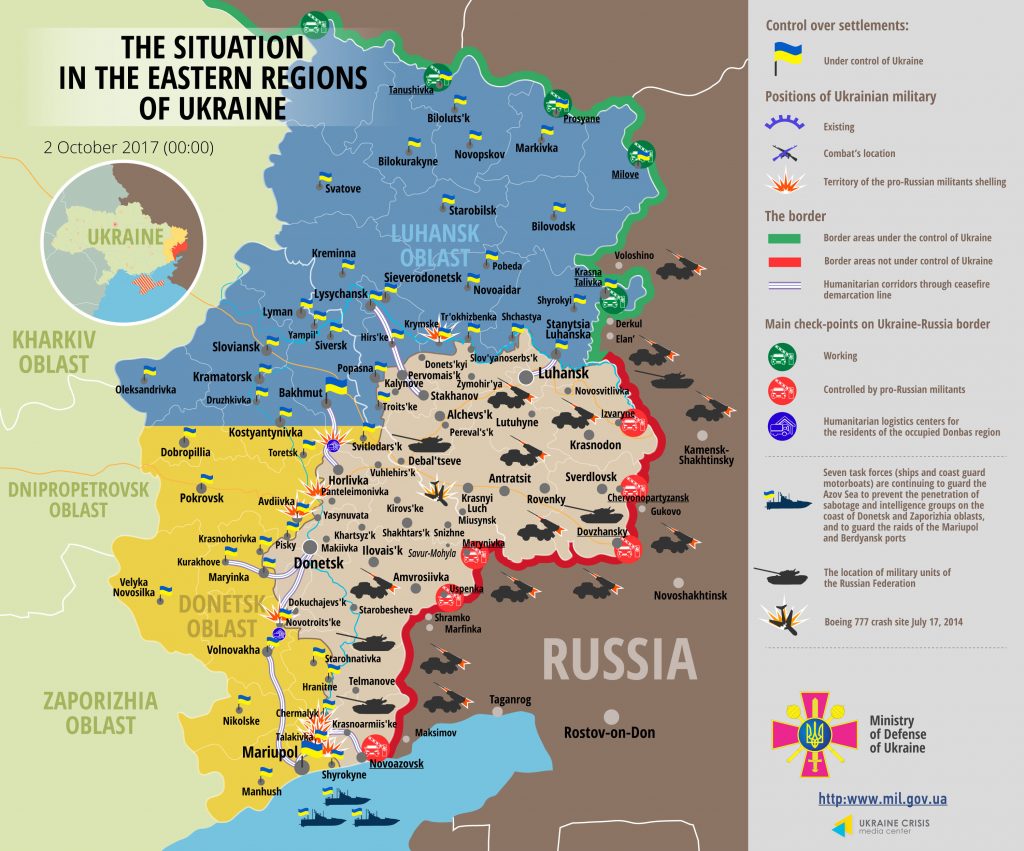 In Mariupol sector, militants violated the ceasefire seven times near Novotroitske and in Pavlopil-Shyrokyne frontline. “A mortar attack was recorded in Pavlopil. The most serious armed incidents took place in Novotroitske and Hnutove. The enemy used armor there,” elaborated Col. Motuzyanyk. Ukrainian troops responded with fire to all incidents.

In Luhansk sector, militants attacked Krymske once for 20 minutes using no heavy weapons.

“One Ukrainian serviceman was killed in action yesterday, but Ukrainian Armed Forces suffered no other casualties. The incident took place in Bohdanivka in Mariupol sector as a result of tripping an OZM-72 mine,” informed the spokesman.

Report on the military developments as of October 1 is available here. Interactive data on the shelling: chronology shelling chart and the interactive map.