The situation remained restless in ATO zone yesterday, as Russian proxies conducted 15 attacks at Ukrainian Armed Forces’ positions. “One Ukrainian soldier was wounded in action during a hostile attack near Avdiivka. He was promptly taken to mobile military hospital in Pokrovsk. His condition is satisfactory,” reported Ukrainian Ministry of Defense spokesman on ATO Colonel Andriy Lysenko at a press briefing at Ukraine Crisis Media Center. 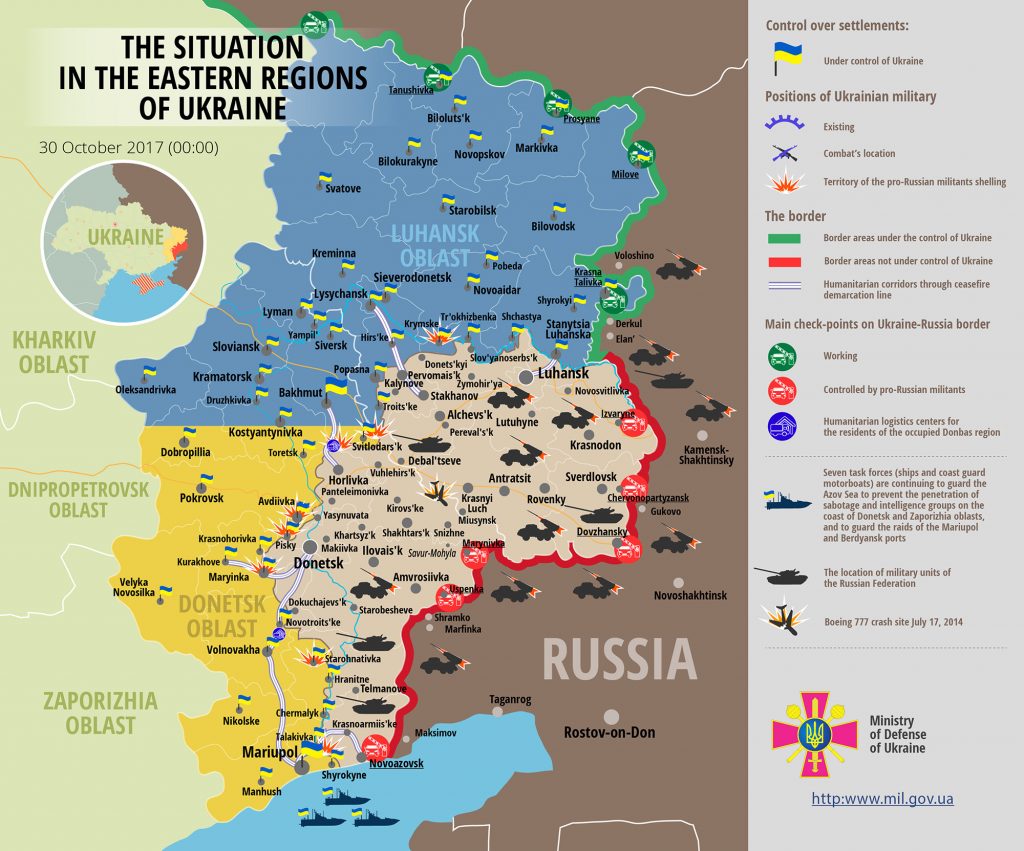 In Donetsk sector, Russia-backed militants opened fire against Ukrainian positions near Zaitseve, Avdiivka, Pisky, Kamianka, and Novoluhanske 11 times using grenade launchers and small arms. “The enemy was shooting randomly four times in order to cause our troops return fire and compromise their positions. Russian proxies committed a cynical provocation in Pisky before the beginning of another round of attack and shelled their own frontline positions with incendiary rounds from IFV weapons. Video evidence of the said incident has been posted on the official website of the Ministry of Defense of Ukraine,” elaborated Col. Lysenko. Militants also attacked a stronghold near Zaitseve using IFV around 21:00.

In Mariupol sector, militants conducted three aimed attacks against Ukrainian positions. Russian proxies shelled ATO troops’ positions near Starohnativka with 82-mm mortars around 4:00. “The attack posed no threat to our troops’ lives, so Ukrainian soldiers did not respond to the provocation,” said the spokesman. Russia-backed militants also attacked our positions near Vodiane and Maryinka with grenade launchers and small arms at 6:00 and 19:00.

Report on the military developments as of October 29 is available here. Interactive data on the shelling: chronology shelling chart and the interactive map.