Russia-backed militants used multiple launch rocket systems (MLRS) in Novoluhanske area yesterday. “At least 40 rockets hit the village’s residential area wounding eight civilians including six senior women and a 6-year-old child,” reported Colonel Oleksandr Motuzyanyk, Ukrainian Ministry of Defense spokesman on ATO, at a press briefing at Ukraine Crisis Media Center. The casualties were taken to the hospital and are in a stable condition now. “The shelling damaged fifty houses, nine multi-apartment houses, a kindergarten, a school, and a feldsher’s station, as well as power and gas lines,” the ATO spokesperson said.

The attack on Novoluhanske took place when the Russian officers – members of the Joint Control and Coordination Center (JCCC) were supposed to cross the contact line through the “Mayorsk” checkpoint located in proximity to the village. “The Ukrainian side at the JCCC had to stop the crossing at the checkpoint and reschedule it to another day in the view of the dangerous situation observed along the contact line as well as in line with the commitments to guarantee security of the servicemen of the Russian Federation’s Armed Forces who are part of the JCCC,” Colonel Motuzyanyk explained.

Colonel Motuzyanyk added that in the morning of December 19 a humanitarian emergency center has been set up in Novoluhanske. It includes military field kitchens and warming centers. “Demining groups keep working in the town and on its outskirts to save civilians from unexploded ordnance,” the ATO spokesperson added. 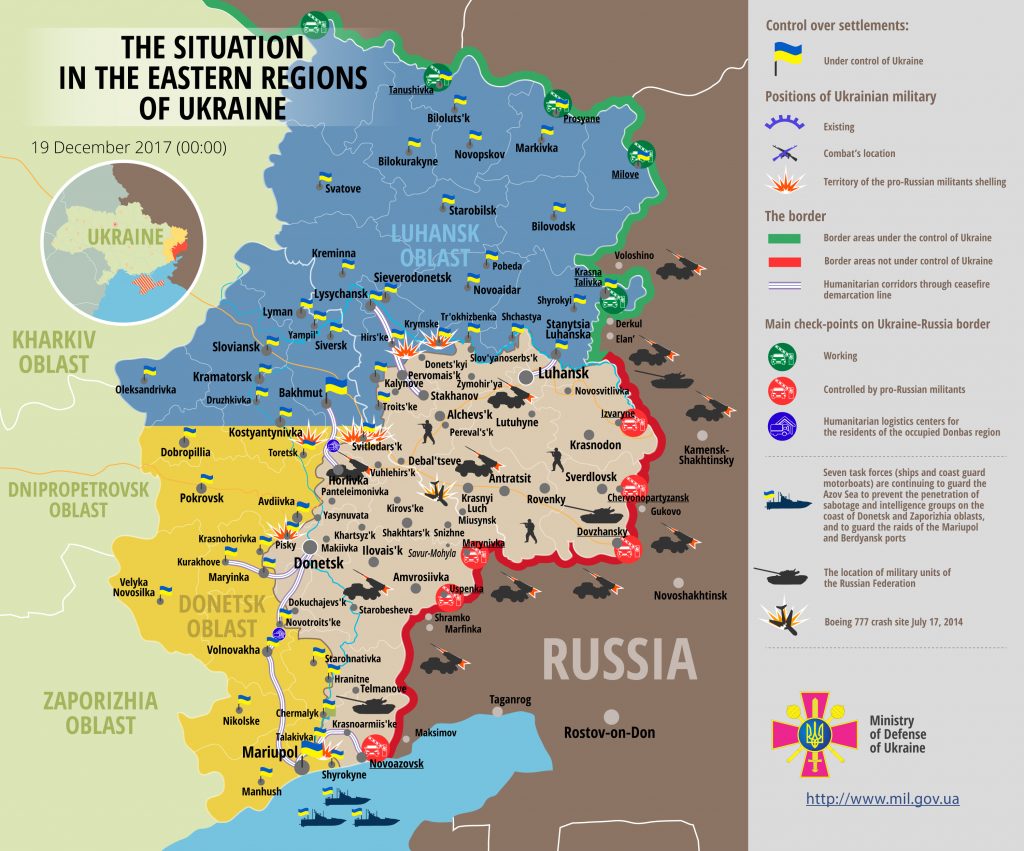 In Luhansk sector, Russian proxies delivered intense dense fire during 10 lasting precision attacks which continued around the clock. Militants fired a total of over 200 mortar and artillery rounds. “The enemy shelled Ukrainian strongholds near Travneve and Hladosove with 122-mm artillery, and fired about seventy 120-mm rounds in the same area,” Colonel Motuzyanyk elaborated. Moreover, Russia-backed militants used 120-mm mortars near Novotoshkivske and Luhanske at different hours and used 82-mm mortars in six locations having fired about 60 rounds in total. In addition, militants opened fire from IFV mounted weapons and grenade launchers near Svitlodarsk and Novoluhanske during the daytime.

In Donetsk sector, Russian proxies violated the ceasefire six times. They were mortaring the Ukrainian positions near Pisky for over two hours having fired over a hundred and ten 82-mm and 120-mm mortar rounds. “Several 122-mm hostile artillery shells exploded in this area as well. In addition, Ukrainian troops recorded hostile attacks involving IFV outside Pisky in the morning and near Vodiane in the evening. Militants also fired several 82-mm mortar rounds near Avdiivka and Vodiane,” the ATO spokesperson said.

Report on the military developments as of December 18 is available here. Interactive data on the shelling: chronology shelling chart and the interactive map.