Over the past day, Russia-backed militants made 58 precision attacks on the Ukrainian troops’ positions. Militants were using heavy artillery, they launched over 130 rounds from 82-mm and 120-mm mortars. Militants kept shelling the residential areas of Zaitseve. “Twenty-seven artillery shells landed in the residential area of the town. Losses and damages are being clarified. Units of the Joint Forces are providing assistance to the civilians on site,” said Ministry of Defense spokesman Colonel Dmytro Hutsulyak at a press briefing at Ukraine Crisis Media Center.

In Luhansk sector, Russian proxies made 20 attacks. “The highest escalation was observed in Zaitseve, Novotoshkivske, and Novozvanivka areas,” the Ministry of Defense spokesperson said. Militants made 66 shots from 122-mm artillery near Zaitseve and Novotoshkivske and used 82-mm and 120-mm mortars near Zaitseve, Novotoshkivske, Krymske, Luhanske, Novoluhanske, and Svitlodarsk, having fired over 120 rounds in total. “Russia-backed militants accompanied the attacks with small arms fire and grenade launchers,” Colonel Hutsulyak added.

Ukrainian troops returned fire in 27 cases. One Ukrainian serviceman was wounded in action in a hostile attack, one more serviceman was injured in a blast of an improvised explosive device. 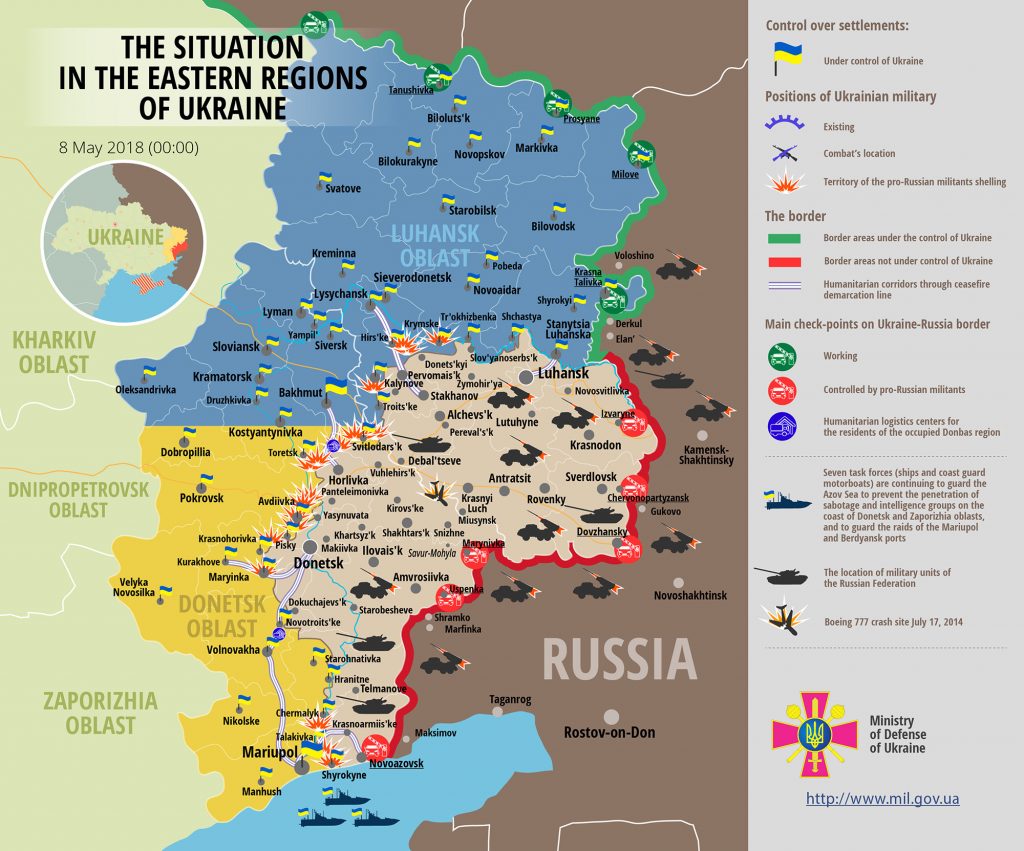 As of 09:00 on May 8, Russia-backed militants delivered 11 precision attacks on the Ukrainian troops’ positions. In Luhansk sector, militants fired ten 152-mm artillery rounds near Loskutkivka. Near Zaitseve and Popasna militants made 33 shots from 122-mm artillery. Moreover, they used 120-mm mortars near Zolote and Troitske. Russian proxies were firing from heavy machine guns and grenade launchers outside Novozvanivka, Katerynivka and Krymske. In Donetsk sector, militants opened fire from small arms, heavy machine guns and grenade launchers near Pishchevyk, Shyrokyne, Vodiane, Verkhniotoretske, and Hnutove.

Report on the military developments as of May 6 is available here. Interactive data on the shelling: chronology shelling chart and the interactive map.