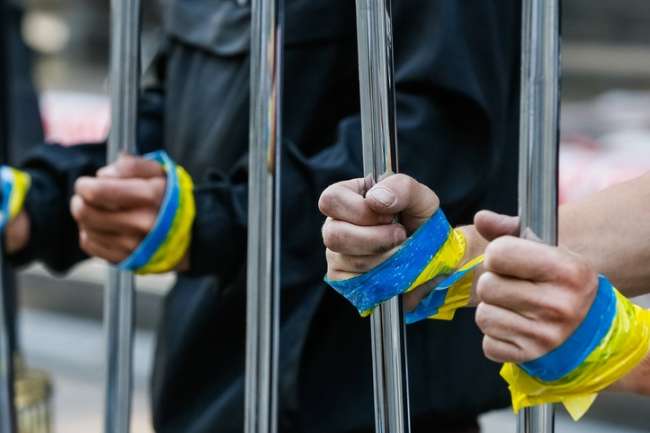 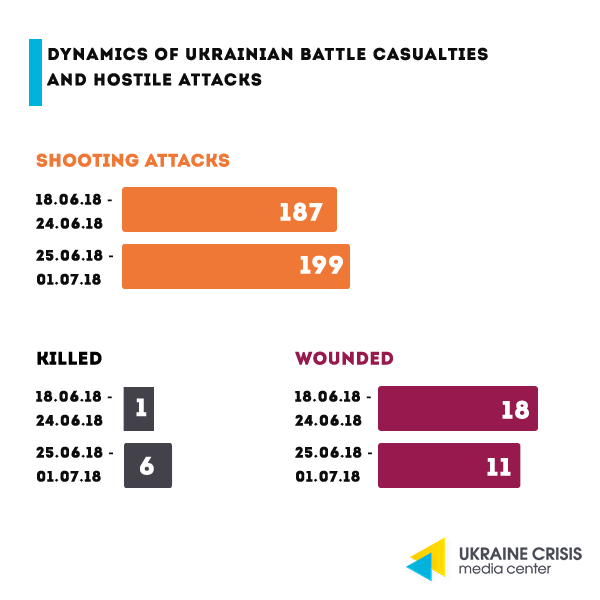 A new ceasefire from July 1. At the meeting in Minsk the Trilateral Contact Group adopted the decision to introduce a ceasefire alongside the entire 426-km long contact line for the two summer months effective July 1. The Ukrainian side states that the units of the Ukrainian Armed Forces will inviolately adhere to the decision adopted.

New violations.Despite the established ceasefire Russia-backed militants have already made two attacks on July 2 by the afternoon. In the Horlivka direction Ukrainian troops’ positions in the area of Zaitseve came under hostile fire from 120-mm mortars. In Luhansk sector Russian proxies fired upon the Ukrainian troops in Novooleksandrivka area with automatic grenade launchers, heavy machine guns and small arms.

The Trump-Putin meeting: what to expect?

The meeting in Helsinki on July 16. The President of the Russian Federation Vladimir Putin will meet the US President Donald Trump in Helsinki on July 16 to discuss “a series of uneasy questions”, said the press-secretary of the Russian President Dmitriy Peskov as quoted by TASS. “Many are waiting for this meeting, it will be a very serious talk about extremely uneasy questions,” he said adding that “serious preparations” are underway ahead of the Helsinki summit. 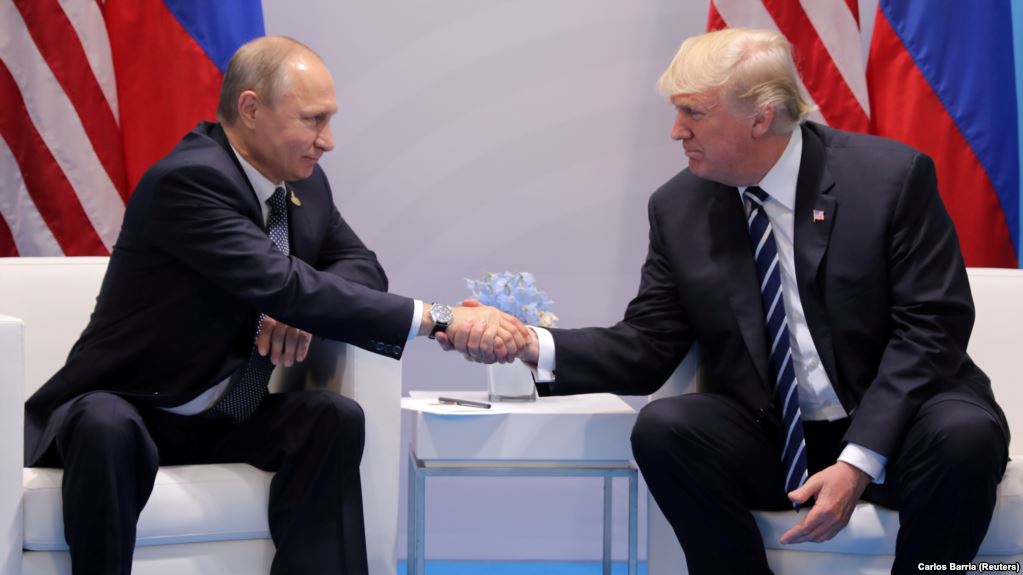 Syria, Ukraine and the US elections: a look at the agenda of the Presidents. The US President Donald Trump stated that at the meeting with the Russian President Vladimir Putin in Helsinki on July 16 he would raise the issue of alleged Russian meddling in the US elections. Speaking to the journalists the head of the White House also said that he would discuss the conflicts in Syria and Ukraine and other international issues with Putin. “I’ll talk to him about everything. We’re going to talk about Ukraine, we’re going to be talking about Syria. We’ll be talking about elections… we don’t want anybody tampering with elections,” the US President emphasized.

Compromises as to the G8? The US President Donald Trump views Moscow’s return to the international fold as inevitable and thinks that “trade-offs” could allow it to rejoin the Group of Seven club of industrialized democracies without giving Crimea back to Ukraine, said the US Secretary of State Mike Pompeo as Trump’s national security adviser met in Moscow with the Russian President Vladimir Putin to prepare for a summit between the two leaders next month in Europe. Pompeo did not elaborate but stressed that the US position remains that Russia illegally annexed Crimea in 2014, a move that led to its suspension from the G7.

The EU summit: sanctions against the Russian Federation extended 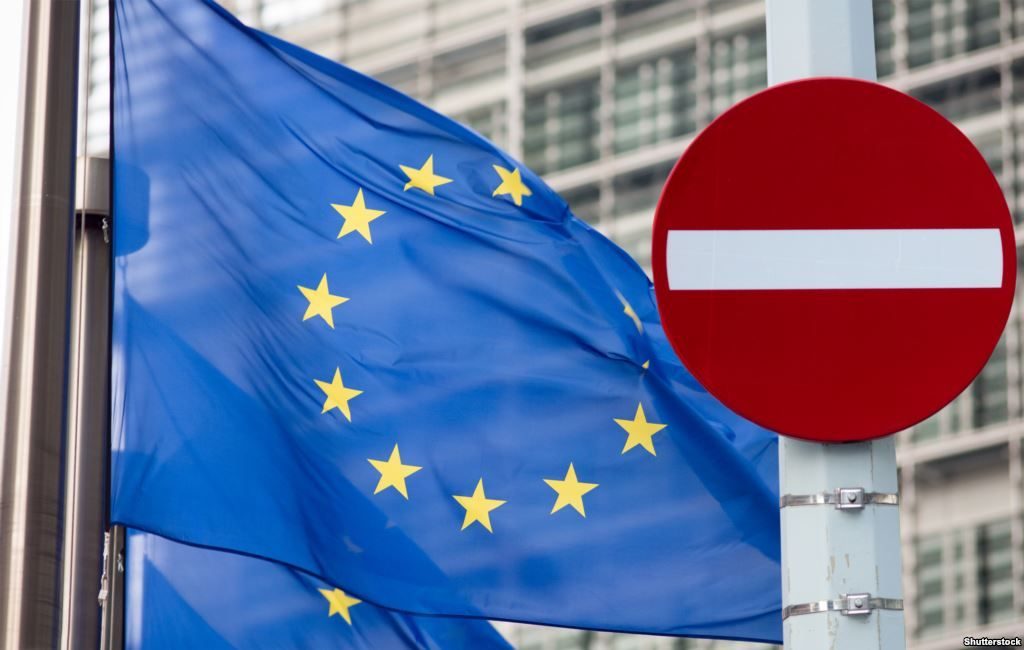 At the EU summit in Brussels the EU leaders adopted the decision to extend the sanctions against Russia, report the media referring to their sources. One of the EU officials spoke to the journalists saying that on June 25 the leaders of the EU member states agreed to extend the economic sanctions against Russia that were introduced after it illegally annexed Crimea and started fueling combat actions in Donbas. The sanctions have been extended for six months. They foresee restrictions on business activities with banks and other financial institutions as well as other restrictions in the Russian energy and defense sectors.

In the summit’s final statement the EU member states called on Russia to recognize its responsibility over the downing of the Malaysian Boeing of the MH17 flight over Donbas in 2014. The European Union calls on the Russian Federation to “recognize its responsibility and fully cooperate with all efforts to establish truth, justice, and accountability.” The EU leaders also reiterated their full support for a UN resolution on the downing of MH17 that aims at independent and all-round investigation of the incident.

#FreeSentsov. According to the lawyer of the Ukrainian film director Oleg Sentsov Dmitriy Dinze, Sentsov is currently not being force-fed. “Feeding was discussed between Oleg and the head of the medical unit as a possibility only if Oleg happens to have a second attack,” Dinze said. The Ukrainian film director had an attack on the 26thday of his hunger strike, Sentsov’s lawyer reminded. On June 29 Dinze said that Oleg Sentsov is held in the colony’s medical unit, his condition is stable. 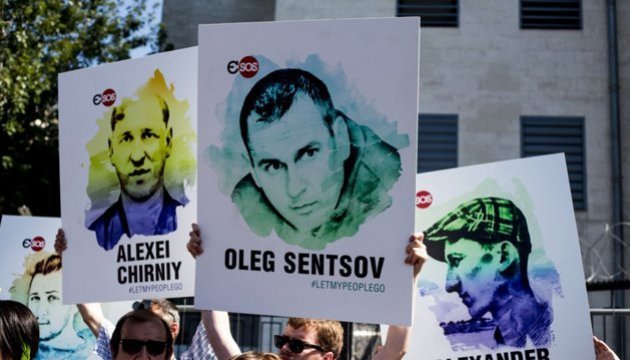 Statements on the possible “23 for 23” prisoners swap.Official Kyiv is ready to pass to the Russian Federation 23 persons convicted for various crimes in Ukraine in exchange for 23 Ukrainian citizens kept in the Russian Federation for political motives, stated Ukraine’s Parliamentary Commissioner for Human Rights Lyudmyla Denisova. The President of Ukraine Petro Poroshenko called on the international community to undertake decisive action to liberate Ukrainian political prisoners in Russia. “In my view, the time has come for our international partners not as much to express their concern, but to give a decisive response like the large-scale and powerful one to the Salisbury poisoning,” President Poroshenko wrote on his Facebook page on June 29.

PACE resolution. The Parliamentary Assembly of the Council of Europe (PACE) adopted a resolution on Ukrainian political prisoners in Russia and in the occupied Crimea, said Head of the Ukrainian parliamentary delegation to PACE Volodymyr Ariev. “Seventy seven (votes) for! Russia has been yet again pointed at its crimes. I thank the rapporteur Emanuelis Zingeris for the excellent work,” he wrote on his Facebook page on June 28. Iryna Gerashchenko, the first deputy head of the Verkhovna Rada (Ukraine’s Parliament) and a member of the Ukrainian delegation to PACE, said that the adopted resolution condemns torture and undue conditions that the Ukrainian citizens – political prisoners in the Russian Federation are being held in. Moreover, the document demands the access to representatives of the International Committee of the Red Cross (ICRC) and of other humanitarian organizations to the conflict zone, to the Russia-occupied Ukrainian territories as well as to the Ukrainian political prisoners in Russia.

Fight against corruption: amendments to the Constitution

The President of Ukraine Petro Poroshenko calls upon the Verkhovna Rada not to protract the adoption of the decision that will lead to revocation of the parliamentary immunity. “I expect of the Verkhovna Rada that they will adopt these amendments to the Constitution as soon as possible without protraction, as each MP promised to revoke the parliamentary immunity. I do ask to do it, now is a very good time to adopt this decision,” the Head of the state said during the festivities on the occasion of the Constitution Day on June 28. He also reminded that the draft law foresees that the MPs of the next convocation will be stripped off the parliamentary immunity and that the law will come into force on January 1, 2020.