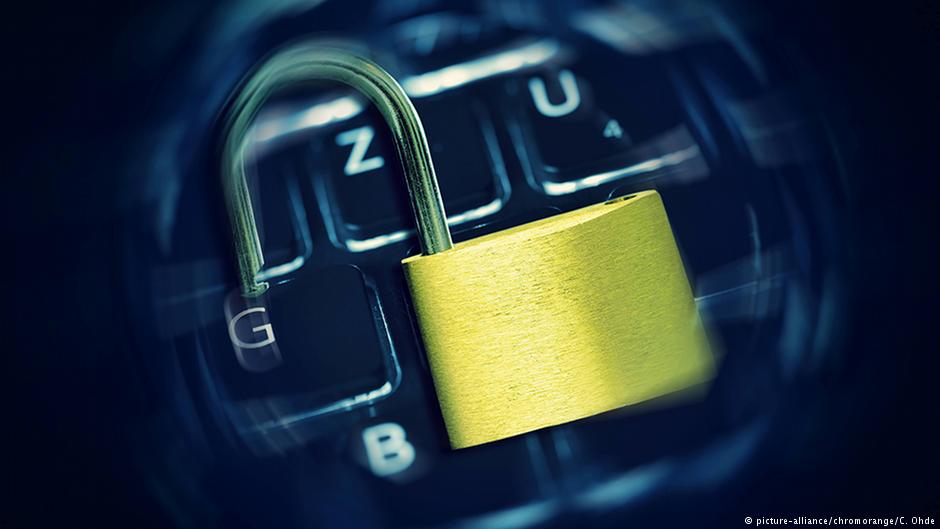 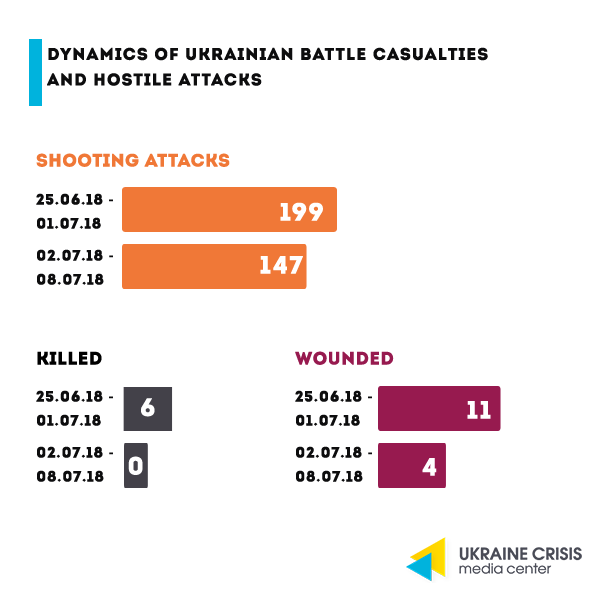 Russia-backed militants in violation of the so-called “harvest-time ceasefire” introduced by the decision of the Trilateral Contact Group for the crops gathering time, kept firing all along the contact line. They were mostly using grenade launchers, heavy machine guns and small arms.

Ukraine’s Joint Forces stand firm on their defense positions, adhere to the ceasefire and refrain from adversary’s provocations. At the same time the military of the Joint Forces, who are directly engaged in combat actions on the forward edge, have the right to open fire upon the decision of the commander of a unit (observation post of a platoon and higher) that is coming under the hostile fire or is becoming subject to a hostile offensive. All the decisions as to the adequate response are made on the spot.

Most tense situation stood in the Mariupol sector, where the highest number of hostile provocations was observed in the area of Vodiane, Hnutove, Shyrokyne, Pavlopil, Chermalyk and Lebedynske. By launching harassing fire from grenade launchers, heavy machine guns and small arms Russia-backed militants tried to provoke the Ukrainian troops to return fire.

One step closer to censorship or reinforced cyber protection? The controversial draft law to block sites in Ukraine

Last week saw lively discussions unfolding on the draft law that suggests a possibility to block web sites in Ukraine prior to the court decision issued. Authors of the draft law emphasize cyber security, while the media and expert community warn against the possible censorship. The Verkhovna Rada (Ukraine’s Parliament) was supposed to consider the draft law on July 5 but decided not to. The week of July 10 is the last plenary one before the summer vacations in the Rada, when the MPs can still approve the law on web sites blocking requiring no court decision. What is wrong with the document?

Who initiated the draft law? The authors of the draft law in question are Ivan Vinnyk (Petro Poroshenko Bloc), Dmytro Tymchuk (Narodnyi Front) and Tetyana Chornovol (Narodnyi Front). On paper they explain their motivation with the intention to protect Ukraine’s cyber space from virus threats and attacks.

What the draft law suggests. The authors suggest blocking a web site if its content has signs of the state treason, terrorism or calls to a suicide. “We are not suggesting to close down web sites. If a web site refuses to voluntarily remove a news piece that represents a threat to the information security, the address of the news piece will be blocked. Blocking the entire web site makes no sense. It’s an archive of many news pieces. The news pieces that represent a threat to information security and might fall into the scope of the article “state treason”, must be blocked or voluntarily deleted. For example, a few big web sites broadcast the ‘DPR’ parade,” MP Vinnyk said on the margins of the Parliamentary session. This explanation, though, does not satisfy everyone.

The risks. Media-related organizations are convinced that in fact the Ukrainian Parliament is one step away from introducing censorship on the internet as there is no clear-cut responsibility and control mechanism. They name the following threats:

– binds Ukrainian providers to block for 48 hours the access to any web site that is just suspected of having violated the law with no court decision required;

– introduces the registry of prohibited web sites that telco operators need to limit the access to. They would also need to purchase the required technical equipment to block the web sites at their own expense. In case they do not comply with the law, they might be sanctioned.

Who is criticizing the draft law? A series of authoritative media and human rights organizations called upon the Parliament to stop and not approve such an imperfect law. These organizations include Ukraine’s National Journalists’ Union, “Human Rights Platform”, “Digital Security Laboratory”, Human Rights Information Center, Freedom House Ukraine, “Information Security” and others.

The draft law’s actual status. The parliamentary committee for national security and defense recommended to the MPs to approve in the first reading the draft law no.6688 that allows to temporarily block web sites. The committee approved the respective decision at the meeting on July 4. MPs can still vote in the law during the week that is left before the vacations start. 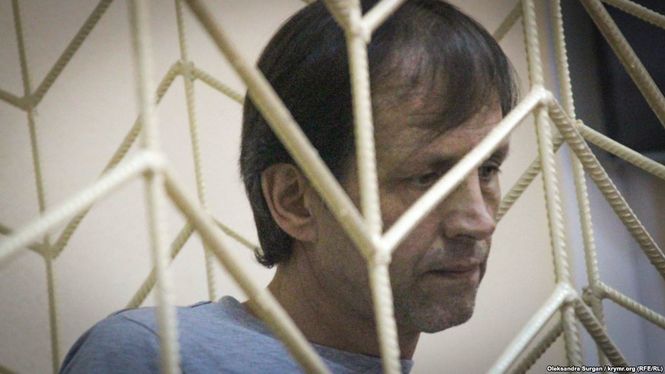 Sentence to Balukh. In Crimea the Russia-controlled Rozdolnensky district “court” sentenced Ukrainian activist Volodymyr Balukh to five years in penal colony and assigned him a fine of RUB 10 thousand (EUR 1,300). The activist’s prison term is cumulative for the two criminal cases. The sentence read out by the judge says that Balukh committed the crime in regard to “the hostility he demonstrated to the actual regime, that is being confirmed by the crimes committed earlier.”

Ukraine’s representative to the Trilateral Contact Group, First Deputy Head of the Verkhovna Rada Iryna Gerashchenko suggested to the representative of the Russian Federation to the Trilateral Contact Group Boris Gryzlov to hold an expanded meeting of the Group in Minsk on July 11 or on another day to discuss the possibility of passing on to Russia 36 Russian citizens held in custody in Ukraine to free the Ukrainians from Russian prisons.

Sentsov: first meeting with the sister in four years. Natalia Kaplan, cousin of the Ukrainian film director Oleg Sentsov imprisoned in Russia, visited him in the Belyi Medved (White Bear) colony in Labytnangi in Russia’s Yamalo-Nenets, autonomous district on July 5.

“We talked with him for two hours. Oleg now weighs 75kg while his height is 190cm, he has lost 15kg throughout the hunger strike,” Kaplan told Hromadske TV. She said Sentsov’s health is now regarded as satisfactory, medical test results are “not very good” but they show “nothing critical”.

“While yesterday he was feeling very bad, he feels normal today. He came himself to the meeting. His condition gets worse by the evening. He says he is feeling better now. The toughest time was the first three weeks of the hunger strike. He is receiving IVs now. He would not have survived without them. He does not intend stopping the hunger strike. His spirit is optimistic. He believes in the victory,” the film director’s sister said.

The case of senior sergeant Markiv in Italy: the first court hearing and the claim against Ukraine 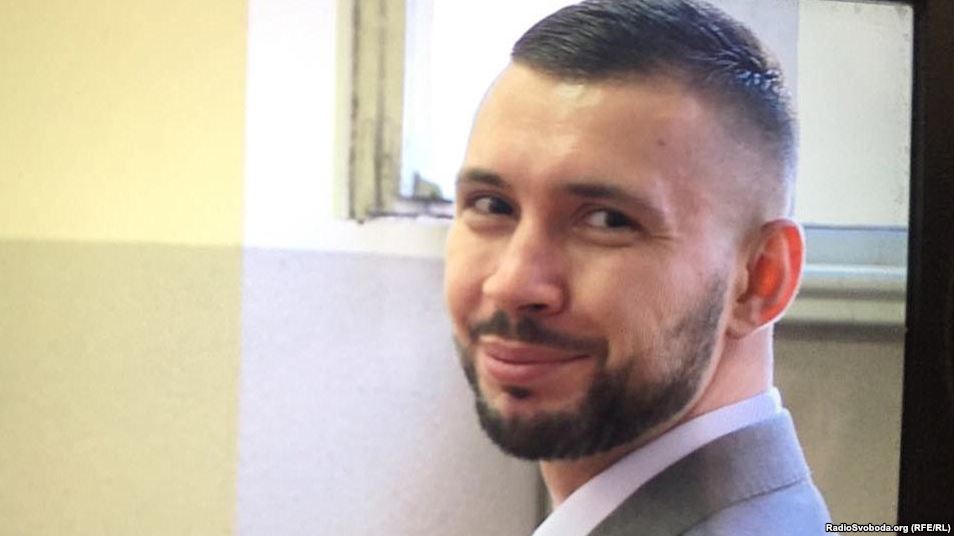 On July 6 the first court hearing in the case of Ukrainian National Guard serviceman Vitaliy Markiv took place in Italy’s Pavia. He is charged with the death of Italian journalist Andrea Rocchelli and Russian human rights defender Andrey Mironov in the combat zone near Sloviansk in Donbas in May 2014. Markiv, senior sergeant at Ukraine’s National Guard, in the rank of a soldier at the moment of the tragedy, was with the National Guard’s battalion on Karachun hill outside Slovyansk, he denies his involvement in the killing of Rocchelli and Mironov. The Ukrainian was arrested in the Bologna airport upon entering Italy to visit his mother last year in June. Over the last year Vitaliy has been held in custody in Italy.

The official Ukrainian side considers Markiv not implicated, it has been demonstrating readiness for cooperation with the Italian counterparts. The Ukrainian side has faith in the Italian justice that will prove it. Moreover, Markiv’s numerous fellow military and other witnesses have provided facts that deny the involvement of the National Guard serviceman in the killing of the journalist and human rights activist. Check out the key facts of the case: “Why Ukrainian serviceman Markiv is being charged with murder of Italian photojournalist Rocchelli”.

The first court hearing was exclusively of procedural nature, the case was not considered on the merits. Five more court hearings are due to take place by November 30. The court allowed filming the process to Radio Liberty, Italy’s public broadcaster RAI and to the Russian state TV channel “Rossiya 1”. A new twist in the case became a civil claim filed by Italian journalists’ associations against the state of Ukraine. The National Federation of the Italian Press (FNSI), the regional Journalists’ Association of Lombardia and the Cesura Lab freelance photographers group co-founded by Andrea Rocchelli, are suing the Ukrainian state represented by the Ambassador of Ukraine to Italy Yevhen Perelyhin in relation to Rocchelli’s death. The content of the claim has not been made public yet. There is an opinion that the case is clearly turning into a political one now. Radio Liberty citing its own sources in the diplomatic circles writes: “The case of Vitaliy Markiv is going level up and becomes political, it is now not only about the charges in the murder brought against a Ukrainian citizen but also about the state of Ukraine being charged with this crime.”

Results of the nationwide opinion poll held by the Kyiv International Institute of Sociology in May 2018 demonstrate that Ukrainians are most concerned with the war in eastern Ukraine – 67 per cent of respondents and with well-being – 54 per cent. The status of the Russian language in Ukraine and relations with the European Union are of concern to two and four per cent of respondents respectively. Relations between Ukrainian citizens of different nationalities, revival of the Ukrainian nation and the annexation of Crimea are of concern to five-six per cent of the interviewed. 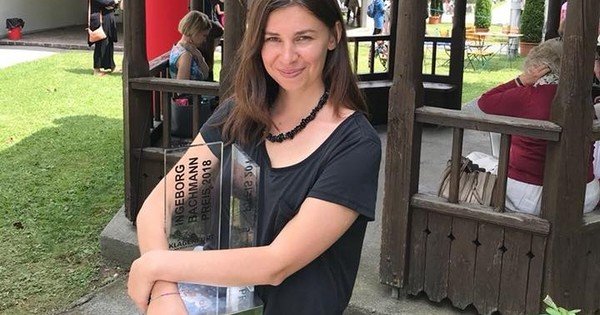 Ukrainian writer Tania Malyarchuk was awarded in the German-literature competition held in Austria’s Klagenfurt and won the Ingeborg Bachmann Prize. The writer earlier wrote on Facebook that she had been selected to the competition with her own German-language text.

The readings take place in Klagenfurt since 1977 and are watched online by 300 thousand people. The Ingeborg Bachmann Prize was founded in 1977 to honor one of the most well-known Austrian writers. The winner gets the prize worth of EUR 25 thousand.

Tania Malyarchuk is a Ukrainian writer and journalist, she lives in Austria since 2011.