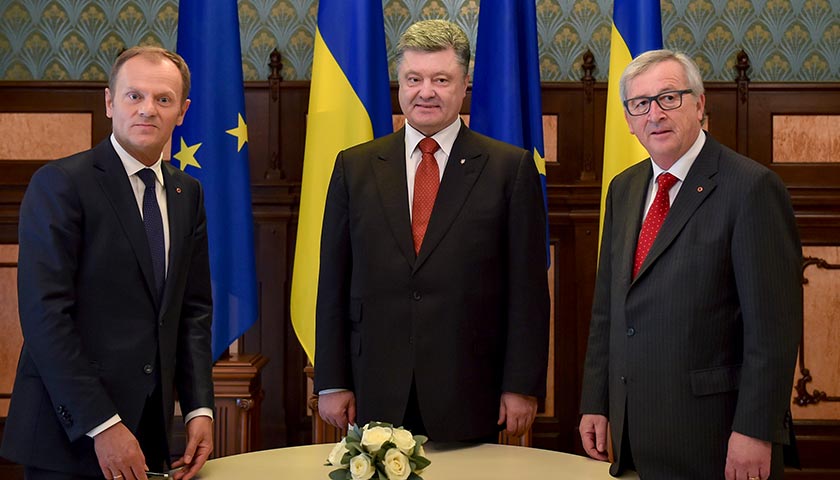 On July 9 the 20thanniversary summit between Ukraine and the European Union took place in Brussels. No sensational results came out of the negotiations between the President of Ukraine Petro Poroshenko and the EU leaders. However in contrast to the past editions from the previous two years the summit did result in signing of the joint declaration that contains a series of statements that are important to Ukraine. Additionally, the talk on “sectoral integration” took place, it may become an important step after the Ukraine-EU Association Agreement is implemented. Poroshenko thanked the EU counterparts for their positive assessment of Ukraine’s achievements while the EU reminded once again that the fight against corruption needs to continue. UCMC takes a look at other must-know developments at the Brussels summit.

At a glance: how it looked like. The public part of the Ukraine-EU summit, particularly the joint press-conference of the three presidents – that of Ukraine, of the European Council and of the European Commission, was filled with mutual affection and friendly gestures. The President of the European Council Donald Tusk spoke good Ukrainian and Polish, President Poroshenko spoke English while the President of the European Commission Jean-Claude Juncker was joking. All the three speeches complemented each other. It was a good gesture on the occasion of the 20thanniversary summit, or, possibly, an attempt to demonstrate that there is already much positive in the Ukraine-EU relations, not just mutual claims and criticism. Ahead of the election campaign the summit stands as a key event for Poroshenko. 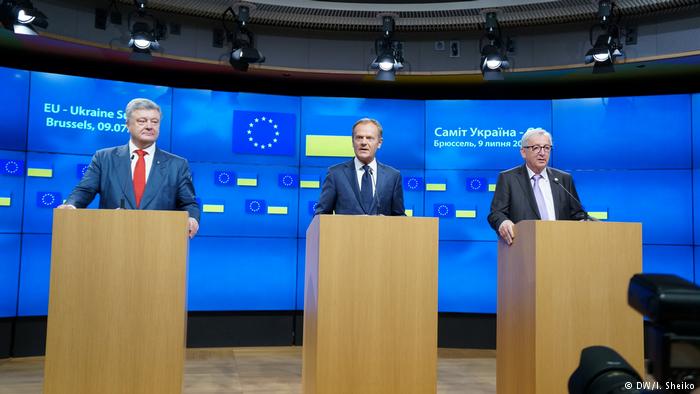 Abstractaffection. It is exactly the spirit of affection that seemed suspicious to some observers. In the opinion of Rikard Jozwiak, Brussels correspondent of Radio Free Europe/ Radio Liberty, who has been on assignment in Brussels for ten years now, the summit was rather a sympathy exchange between the politicians and focused on the past to mask the lack of joint projects for the future: “Nothing was decided upon at this summit. We saw the three presidents – Poroshenko, Tusk and Juncker speaking of what was done in the past. They did not mention the future. No movement forward is observed in many issues,” the reporter told Hromadske TV in a comment. “It was a meeting where Tusk and Juncker could thank their good friend Poroshenko as it is probably the last time they meet on their actual posts. It was rather a ‘farewell’ to the Ukrainian President who so far has been the best in the Ukraine-EU relations. It was a thank-you gesture to Poroshenko and the wishes for success after he steps back.”

Inflation of the European dream: the negative side of the summit for Ukraine. Illustrative of the fact that no big decisions were made at the summit comes the situation when Ukraine’s EU membership prospects were not mentioned. Ukrainian politicians and the President Poroshenko in the first place are constantly emphasizing this particular goal of Ukraine’s relations with the EU. EU membership for Ukraine is both a civilization choice, a development model and, in the end, the security dimension. That’s why for the wider society the inflation of expectations from EU-Ukraine summits is very high. If the final declaration of the summit does not mention Ukraine’s membership prospects in the EU, it may lead the bigger part of the society to the opinion that nothing was achieved. 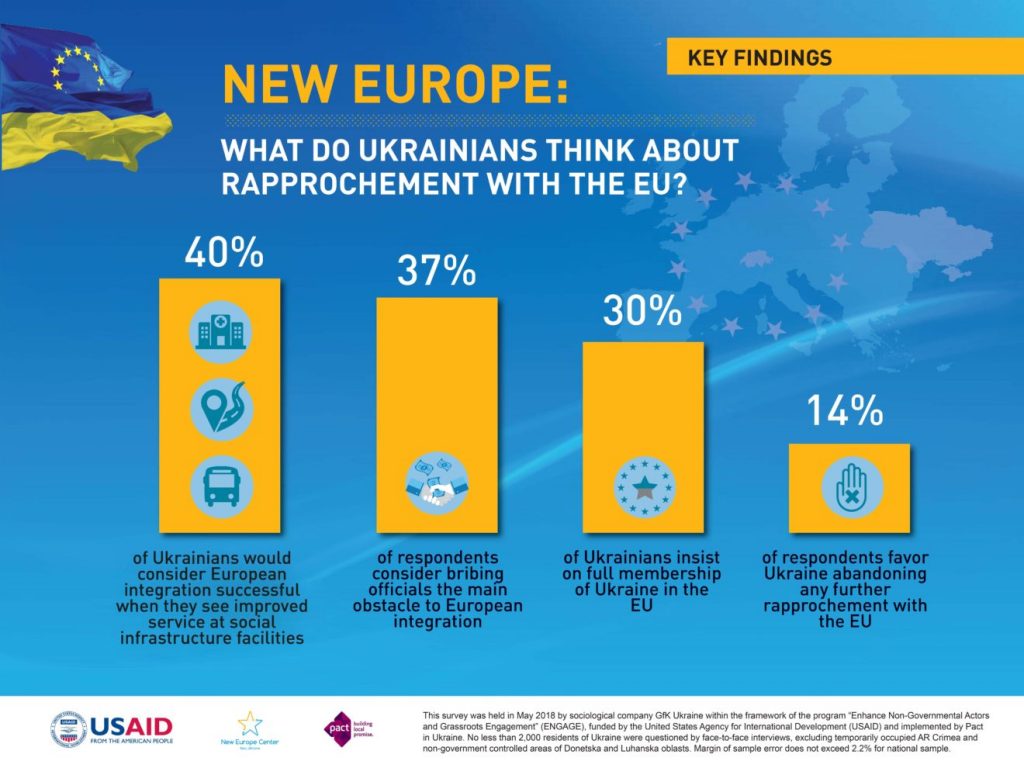 The final declaration: Russian aggression, political prisoners and MH17. The declaration comprises 11 points. Four of them are dedicated to the armed conflict caused by Russia’s aggression. The document mentions Russia as aggressor that started the attack back in February 2014; and says that the sanctions need to stay until the Minsk agreements are implemented in full. It is also important that the document mentions Ukrainians illegally detained or imprisoned in Crimea or Russia, some of them are mentioned by their names including Oleg Sentsov, Volodymyr Balukh, Oleksandr Kolchenko, Stanislav Klykh, Oleksandr Shumkov and Roman Sushchenko. The declaration also mentions the illegal construction of the bridge across the Kerch strait without Ukraine’s consent, as well as the further militarization of the Crimean peninsula, of the Black Sea and of the Sea of Azov. The parties also called on Russia to recognize its responsibility over the downing of the MH17 flight.

Learn more about the Kerch strait bridge and Ukrainian prisoners of Kremlin from our materials.

Reforms and the fight against corruption. As to the domestic affairs, in this document the European Union recognizes that reforms in Ukraine are proceeding and are successful. At the same time changes are needed in the fight against corruption. Ukraine’s membership in the EU is linked to how successful the transformation of the country itself will be. That’s why the European Union pays much attention to the reform success when talking about Ukraine.

The Association Agreement – what’s next? At the moment the relations between Ukraine and the EU are regulated by the Association Agreement. At the same time an important discussion has been on for a year now, questioning where it is all going and what will happen next after the Agreement is implemented, especially in the circumstances when the full membership is not very realistic in the nearest time. Last year the President of Ukraine announced the new priorities of Ukraine’s integration to the EU. They include Ukraine joining the EU’s Customs Union, digital single market, Energy Union and the Schengen Area. These are the ambitious goals that were followed by concrete actions. Over the year the Ukrainian government transformed the ideas of the unions into the “sectoral” market integration with the EU when a particular branch of the Ukrainian economy would integrate a respective European Union market.

“It actually means applying the ‘Norway model’ to the relations for the time when the EU membership seems hardly reachable,” says Taras Kachka, strategic advisor to the International Renaissance Foundation.

The European Union is very cautious when it comes to such projects as they realize how complex and serious it might be granting Ukraine similar rights in particular sectors. That’s why it was important to Ukraine to get the political consent at the highest level. This is exactly what was discussed at the summit.

It still remains an open question whether these political agreements can be implemented at the Ukraine-EU Association Council in December 2018. However the fact that the political mandate to implement such ambitious projects was given out, is a big foreign policy achievement.

“So far Ukraine acts as Ukrainians do at their backyards – if there is a chance to plow a land plot and plant tomatoes, they will go for it. And that’s how year after year and step by step a small vegetable garden is being transformed into a latifundium,” Taras Kachka elaborates on Ukraine’s strategy of the European integration in his interview to the “Dzerkalo Tuzhnia” media.