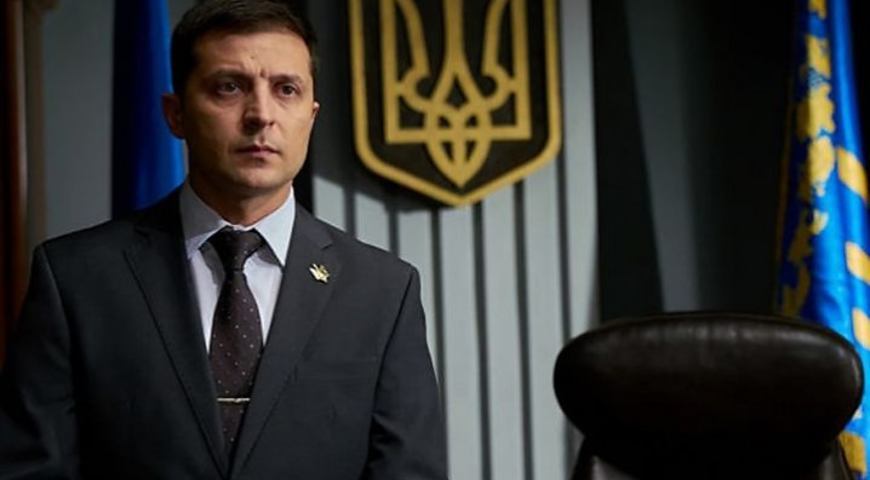 In his first 100 days in office President Volodymyr Zelenskyi brought new people to power but failed to accomplish what seemed to have a “quick” solution during the election campaign. What he managed to do and what not, how it is seen by Ukrainians and by the expert community, UCMC explores.

One-partymajorityintheParliament. Zelenskyi’s top achievement in his first 100 days in office became the landslide victory of the “Servant of People” (Sluha narodu) party at the parliamentary elections. The party took 253 seats in the new Rada (Parliament). One-party majority in the Parliament happening for the first time in Ukraine since 1991, has given the President control over executive power – the government as well as over law enforcement agencies the heads of which are appointed by the Parliament – heads of the Interior Ministry, Security Service and Office of the Prosecutor General.

One-party majority in the Parliament is so far Zelenskyi’s only visible success story. The President has implemented neither of his promises that he was trying to conclude in the first 100 days. Zelenskyi is still working in his office in Bankova street that he planned to turn into a museum, he previously voiced plans to move his office to a different, modern location. Rest of more important tasks also remain unsolved.

The new government. On August 29 the new Parliament held its first sitting. MPs voted in the composition of the new government quickly and efficiently, in record-breaking terms. The voting “in package” was supported neither by “European Solidarity” (Yevropeiska solidarnist), nor by “Holos” (Voice), nor by “Batkivshyna” (Fatherland). In just a few hours giving up on the lunch break Zelenskyi’s party reloaded the country’s authorities.

All officials appointed to the key state posts are Zelenskyi’s people. The President interviewed the candidates in person and approved their appointment. Out of the 17 government members 11 are men, six are women. Average age of the ministers is 39. Youngest ministers are 28 and 29 years old. They are the Minister for Digital Transformation Mykhailo Fedorov and the Minister of Education Hanna Novosad.

Oleksiy Honcharuk was appointed Prime Minister. There is little information about him available to Ukrainians until now. He is 35 years old and is Ukraine’s youngest Prime Minister. From May 28, 2019 and until his appointment as government chief Honcharuk served as deputy head of the President’s Office. In Zelenskyi’s team he was responsible for economic policy and economic affairs, his academic major and professional field is law.

In 2014 he ran for a parliamentary seat in the list of the party “Syla Lyudei” (People’s Power) but the party did not overcome the threshold. He then served as government advisor to the Minister of Ecology Ihor Shevchenko, later to the Minister on Economic Development and Trade Stepan Kubiv. In 2015 he chaired the NGO “Better Regulation Delivery Office” that drafts and implements the state regulation system in order to improve business climate.

Vice Prime Minister on European and Euro-Atlantic Integration Dmytro Kuleba – Ukrainian diplomat, Permanent Representative of Ukraine to the Council of Europe, is a more familiar figure in the international arena as well.

In 2014 he served as Ambassador-at-Large. At Ukraine’s Foreign Affairs Ministry he worked on strategic communications, sought to enhance Ministry’s digital procedures and Ukraine’s public diplomacy.

In April 2016 he was appointed Permanent Representative of Ukraine to the Council of Europe.

Prystaiko was not part of Zelenskyi’s team during the election campaign, but after Zelenskyi’s victory he helped his team with preparations to international negotiations including contacts with the NATO Secretary General Jens Stoltenberg. His appointment is a signal that Ukraine’s course towards the EU and NATO will be preserved.

Changing executive heads at regional level. The new President started with considerable renewal of staff in the executive power. At regional level Zelenskyi was not only intimidating local civil servants in public in the manner of President Lukashenko but also fired them. Zelenskyi dismissed 22 out of 24 heads of regional state administrations. He has appointed their substitutes in only half of the regions. Rest of the posts are covered by temporary acting heads.

Minsk process. One of Zelenskyi’s promises was implementation of the Minsk agreements. The new President did not clearly achieve the intensification of the Minsk process but he did succeed in achieving some positive developments that open up new possibilities. The President has restarted the work of the Trilateral Contact Group in which representatives of Ukraine, OSCE and self-proclaimed republics take part. Ceasefire agreement that was supposed to take effect on July 21 was violated almost immediately.

For now the only considerable progress of “Minsk” is the disengagement of troops in Stanytsia Luhanska agreed upon on June 5. The actual disengagement was supposed to start on June 10. However incessant ceasefire in the area started only on June 19. It lasted seven days for the first time.

Zelenskyi promised to rebuild the bridge in Stanytsia Luhanska in a month after the disengagement of troops is concluded. The bridge was blown up during combat actions back in 2014. Militants protract the dismantling of fortifications, so that it is not yet possible to start reconstructing the bridge.

Possible release of political prisoners. Last week the news came out that Russia and Ukraine agreed to swap prisoners – 33 for 33, while five Ukrainian political prisoners were transferred to the Moscow detention center “Lefortovo”. Interfax quoting own sources stated they are being prepared for an exchange. Office of the President does not comment on the exchange process.

If the information is true, already on August 30-31 Ukrainian political prisoners supposedly including Sentsov, Klykh, Karpyuk, Balukh, Hryb, Kolchenko and Sushchenko can be back in Ukraine.

Dubious appointments. Appointment of Andriy Bohdan to the post of the Head of the President’s Office is the chief appointment problem since Zelenskyi assumed office. During the Revolution of Dignity Bohdan was deputy minister in the government of Mykola Azarov and is thus subject to the Lustration law. It did not stop Zelenskyi and he appointed Bohdan to the post of the President’s Administration chief. In his turn Bohdan reorganized the Administration of the President into the Office. Bohdan claims his status of the Head of this institution does not make him a civil servant and is formally in line with the law. Employees of the Office are not civil servants either and will be able to keep getting higher salaries thanks to the EU financing.

In 2014 Avakov chaired the successful operation that prevented the “people’s republic” scenario in Kharkiv. Avakov is thought to have ideated and implemented the transformation of internal troops into the National Guard – a unit that has a combat function.

At the same time under his management massive professional evaluation of policemen was failed, the police (militsia) reform resulted in cosmetic changes and name change. During Poroshenko’s presidency Avakov became his chief opponent, he actually chaired the wing that was opposing the President.

Business representatives did not dare to oppose law enforcement. “ArselorMittal” agreed to invest USD 1,8 billion to modernize the plant, they expect to cut emissions by 50-55 per cent. Security Service unfroze the company’s accounts. The company lost USD 150 million during the arrest.

Liberation of the captured Ukrainian sailors.As a candidate running for President Volodymyr Zelenskyi promised to make each and every effort to liberate the 24 Ukrainian sailors captured by Russia in the Kerch Strait in autumn 2018. The International Tribunal for the Law of the Sea ordered to release them unconditionally.

In June Zelenskyi said it was a “non-complicated and very urgent” step achievable “in the nearest time”. Russia keeps not abiding to the decision for the third month.

Russia’s isolation shrinks: PACE and G7. In the first months of Zelenskyi’s presidency the international community made at least two attempts to get Russia back out of its political isolation. They did succeed in one of the cases.

After the first month in office Volodymyr Zelenskyi had to justify himself when the Russian delegation was let back to the Parliamentary Assembly of the Council of Europe (PACE). Zelenskyi emphasized that when he was meeting with the leaders of France and Germany Russia’s return to PACE was a decision already made so his diplomatic efforts did not help.

The return of Russia to the “Group of Seven” was opposed by representatives of the Great Britain and Germany, later joined by Canada. Donald Trump previously agreed with Emmanuel Macron to invite Russia to the next G7 summit in 2020. The US President still thinks it’s possible, while the decision made at this year’s summit in France says it’s too early to welcome Russia back in G7.

The new political reality as seen by Ukrainians

According to the national public opinion poll jointly held by the Ilko Kucheriv Democratic Initiatives Foundation and the Kyiv International Institute of Sociology (KMIS) between August 8 and 20, 63 per cent of respondents assess positively the first steps of the President Zelenskyi and his team, 13 per cent give negative assessment and 24 per cent are undecided. Positive attitude prevails across Ukraine – in the West (72 per cent), in the Center (65 per cent), in the South (48 per cent) and in the East (64 per cent).

The priority tasks for President Zelenskyi and his team that respondents named are: ceasefire in Donbas – 71,5 per cent; increase of welfare standards (higher salaries and pensions etc.) – 44 per cent; decrease of tariffs – 31 per cent; holding liable corrupt civil servants – 21,5 per cent; oligarch’s influence on politics decreased – 18 per cent.

At the same time according to the poll held among experts by the Ilko Kucheriv Democratic Initiatives Foundation between August 19 and 26, experts assigned the 3,7 mark while 10 is the maximum to assess Volodymyr Zelenskyi’s activities during his first 100 days in office. To compare, experts assigned the 6,3 mark to Petro Poroshenko after his first 100 days as President. Viktor Yanukovych got 2,7 in 2010 respectively.

Key achievements. Experts consider Volodymyr Zelenskyi’s biggest success in his 100 days in office the dissolution of the Parliament and the further success of the party “Servant of People” at the early parliamentary elections. It led to the one-party majority in the Parliament. Experts also emphasize the President’s efforts in the international arena: his first foreign visits, setup of contacts with leaders of the EU and Canada as well as his scheduled meeting with the US President. These steps demonstrated the adherence to the existing pro-Western foreign vector. Other achievements also include President’s initiatives as to the peace process in Donbas – intensification of the Minsk process, efforts to hold the Normandy format negotiations, the advance of prisoners swap etc.

Key failures. President’s key failuresthat experts name mostly concern his appointments as well as the criteria behind them – personal contacts and loyalty instead of professionalism. Same applies to the persons with dubious reputation included into the party list of the “Servant of People”. Experts also note failures in the international dimension – in particular lack of efforts when countering Russia’s return to PACE, no initiative expressed to reinforce the sanctions against Russia after it failed to implement the Tribunal’s order to release Ukrainian sailors and started issuing passports in the occupied Donbas. Among the President’s first failures that experts named is also the style of his conduct during official meetings in the regions and inefficient steps to cease fire in Donbas.