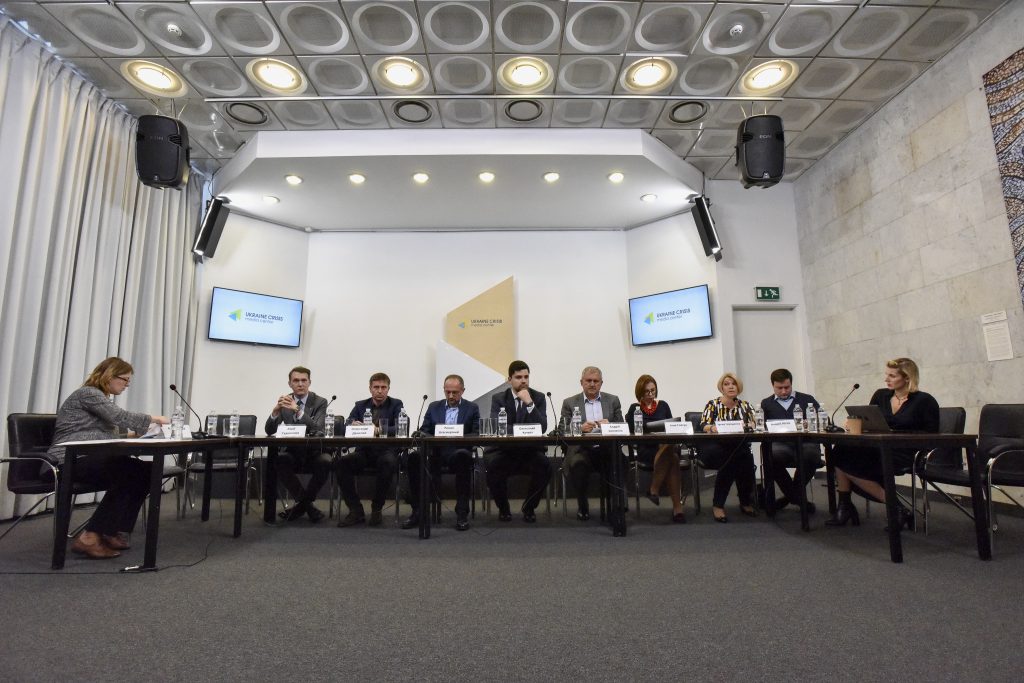 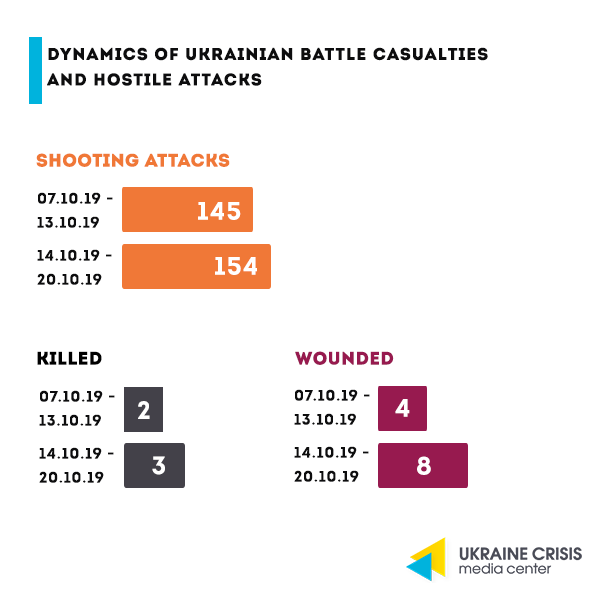 Over the last week Zolote-4 located in one of the disengagement sites was fired upon by Russia-backed militants several times. On October 17 OSCE Special Monitoring Mission to Ukraine also recorded ceasefire violations on another disengagement site – near occupied Petrivske.

On October 17 a convoy of trucks that Russian calls humanitarian illegally entered Ukraine’s occupied areas. It is the 87thconvoy that Russia has sent after it started the war. Ukraine has no access and cannot conduct respective customs checks or border control. In the past Russia used the convoys to bring weapons and other supplies to its proxies in Donbas.

Is there an alternative to the Minsk Protocol and the “Steinmeier formula”? 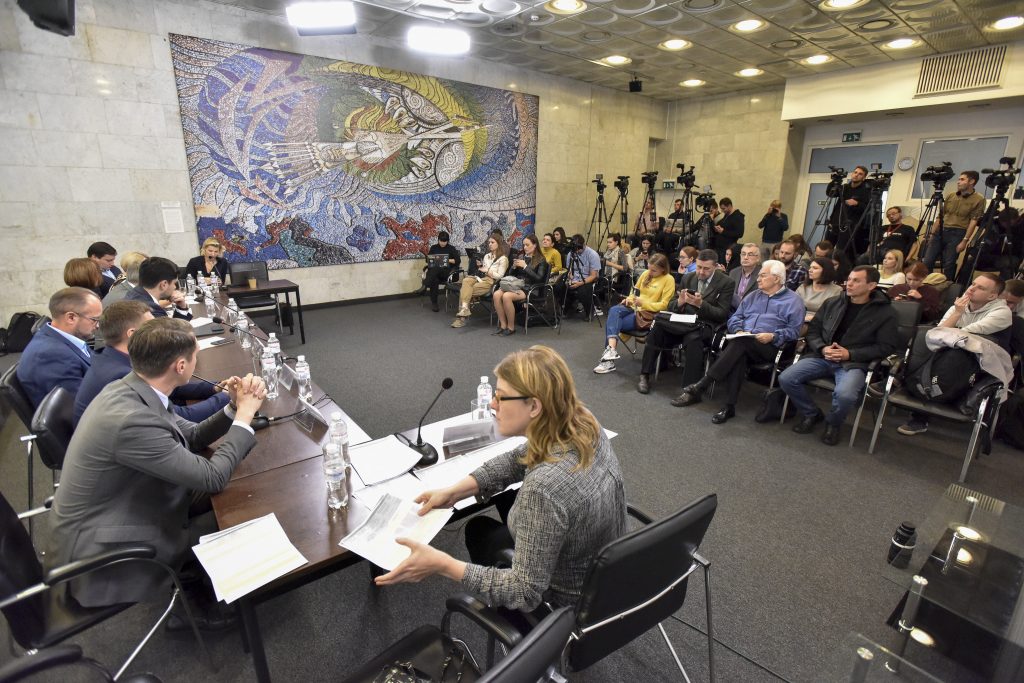 On October 21 the roundtable “Steinmeier formula” and the Minsk Protocol: how to resolve the conflict in Donbas?” was held at Ukraine Crisis Media Center. Discussion participants included representatives of political parties “Servant of the People” (Sluha Narodu), “European Solidarity” (Yevropeiska Solidarnist) and “Holos” (Voice), representatives of think tanks, Movement of Resistance to Capitulation and a former representative of Ukraine to the Trilateral Contact Group in Minsk. The discussion resulted in clear suggestions for the authorities on settlement of the situation in eastern Ukraine formulated by civil society and political opposition.

The Minsk Protocol: security has priority over politics. One of the important arguments in the discussion emphasized the danger of saying that the political part of the Minsk Protocol should be implemented separately from security issues that include ceasefire and withdrawal of Russian troops from the occupied territory. “It used to be that any ideas were discussed in the package with the key, security part of the agreements. In this context I am very much concerned about the fact that we see only the political block discussed, it makes Ukraine responsible for its implementation, while bracketing off what Russia is supposed to do. Coming to terms with Putinis impossible, it is important not to play into Russia’s advantage but to act from the position of protecting Ukraine’s interests,” said Iryna Gerashchenko, MP, co-chair of the “European Solidarity” faction.

Understanding true reasons of the Russian aggression against Ukraine. Inna Sovsun, MP of “Holos” party recalled how important it is to keep in sight the true reasons of Russia’s aggression against Ukraine: “In order to understand how to settle this conflict we need to be conscious of why Putin attacked Ukraine. The only reason of the Russian aggression is Ukraine’s democratization. It is what Russian is most afraid of. Putin’s goal is the nonexistence of the Ukrainian state.” Ukraine has to be building an international support network and be incessantly demonstrating that Russia is an enemy of the world democracy. Engaging in negotiations with the Russian Federation without a clear strategic plan in hand is a weak and risky position.”

Alya Shandra, editor-in-chief of “EuromaidanPress” also emphasized the importance of understanding adversary’s motives. “While searching for a way to resolve the conflict in Donbas we have to understand what our adversary wants. It is Ukraine’s federalization and cementing of the permanent special status of Donbas.” The correspondence between high-level officials from the Surkov Leaks points at these plans by the Kremlin. It is the angle Ukraine needs to look from when formulating its response to the aggressor.

Stop thinking that peace will come tomorrow. Roman Bezsmertnyi, former representative of Ukraine in the Trilateral Contact Group in Minsk said it is important to realize that the war will not end tomorrow regardless of how strongly Ukrainians want it. “We need to stop thinking that peace is about to come. Not only new international conflicts are unfolding but maybe also the global conflict with the use of hi-tech weapons. We need to build-up our defense sector and to be ready to protect ourselves becoming part of the global security system. We must not cut our spending on defense, on the contrary we need to increase it,” Bezsmertnyi said. Ukraine’s former envoy to the Minsk-based group emphasized the importance of forming a block countering Russia and said Ukraine joining NATO should be its strategic goal.

Yuriy Hudymenko, “Democratic Axe” (Demokratychna Sokyra) party member, co-organizer of the Movement of Resistance to Capitulation agreed that it is important to communicate to the society the truth of the “long war” with Russia: “The idea that Ukraine will be at war with Russia for a long time needs to be communicated to the society. The war has been actually on for several last centuries. They (the Kremlin) have a goal of returning Ukraine back under their full control and they are moving towards it. Our goal is not to get into the Russian empire again,” Hudymenko said.

Maintaining and stepping up sanctions. Sanctions remain an important mechanism of pressure on the Russian Federation. Oleksandr Danyliuk, head of the Defense Reforms Center, emphasized importance of preserving the sanctions: “Our key task for now is to think how not to have the sanctions against Russia lifted but on the contrary reinforced. To achieve that we ourselves need to become an example for the world and not to allow ourselves make any business with Russia. We also need to be saying that Russia has violated its international commitments under the Budapest Memorandum, we should be looking for new negotiation formats.”

“Minsk format is exhausted. Unfortunately today Russia as well as France and Germany strive to step out of the format and lift the sanctions. Today we have to be talking not about how to make Russians leave Donbas – there are three army corps stationed there and they will not leave, even if Ukraine agrees to federalization. What we do talk about today is Minsk and Normandy seen through the prism of what Ukraine needs to do for the sanctions to be preserved and reinforced.”

According to the expert Ukraine needs to be mostly appealing not to the Minsk Protocol but to Russia’s non-adherence to the Budapest Memorandum that binds Russia to guarantee Ukraine’s territorial integrity and not to exercise economic pressure in exchange for nuclear disarmament. Sanctions need to be linked exactly to Russia’s non-adherence to these international treaties, not only sanctions by the US and the UK but also by EU member states.

“One used to try to convince us that the choice is between the Minsk agreements and ‘the war till the last soldier’. They are now saying – or the ‘Steinmeier formula’, or ‘the wall around Donbas’. We have not exhausted all the possibilities offered in the framework of the Budapest Memorandum,” agreed Andriy Senchenko, head of the NGO “Force of Law” (Syla Prava).

Bad parody: Ukrainians outraged at a humoristic song by the “Kvartal 95” 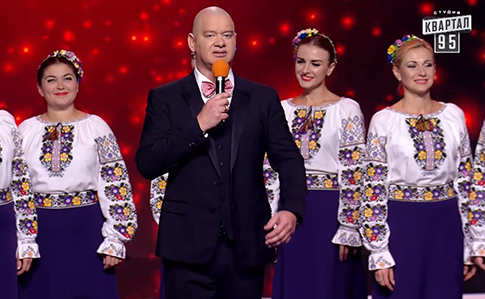 On October 19 in an episode of the show “Vechirniy Kvartal” (Evening Quarter) produced by “Kvartal 95” (Quarter 95) studio comedian Yevhen Koshovyi and female singers of the Veryovka National Folk Choir mocked the arson of Valeria Hontareva’s house by performing a parody to a folk songthat they called “A house was burning”.

On October 20 the episode was posted on YouTube, it later caused a heated discussion in the Ukrainian society. President Zelenskyi’s former colleagues from the “Kvartal 95” studio are accused of going too far with “black humor” ridiculing the fire. The state-funded choir was accused of participating in political battles. According to the media, President Zelenskyi is still in the group chats of the “Kvartal 95” and can see the scripts of the show before they go on air.

The show “Kvartal 95” is broadcast by “1+1” TV channel owned by Ihor Kolomoyskyi. Hontareva claims he was exercising pressure on her because of “Privatbank” nationalization. The oligarch is now trying to get the bank back or get a reimbursement.

A massive wave of social media users responded negatively to the video by the “Kvartal 95” on YouTube and left comments expressing their discontent on the choir’s Facebook page.

Commentary by Valeria Hontareva. Hontareva who now resides in the UK called the skit by the “Kvartal 95” a shame and a mockery of human grief.

Commentary by Kolomoyskyi. Oligarch Ihor Kolomoyskyi praisedthe skit by the “Kvartal 95” reassuring that he has nothing to do with it though.

Commentary by the Minister of Culture. The Minister of culture, youth and sports Volodymyr Borodianskyi wrote that he feels ashamed of the Hryhoriy Veryovka National Award-Winning Academic Folk Choir of Ukraine.

Commentary by political opposition. MP from “European Solidarity” party Iryna Gerashchenko said MPs will insist that the Veryovka choir does not perform at opening and closing sessions of the Parliament.

Commentary by the director general of the choir. Director general of the Veryovka National Folk Choir Zenoviy Korinets in a comment to “Ukrainska Pravda” said that he himself made the decision to sign with the “Kvartal 95” about the arson of Hontareva’s house and that he is very much ashamed of it now. “It was a wrong decision of mine. It was not the team (that decided), the team was not very enthusiastic about taking part in this event.”

“We were suggested to make this song together with Yevhen Koshovyi (Kvartal actor – edit.). We talked as I felt that it was an indecent text about Valeria Hontareva. But we were told: ‘You see, here we ridicule Kolomoyskyi, the President, MPs and our MPs as well. We have been doing it for 20 years, laughing (at officials – edit.), there is nothing wrong with that. This topic is being discussed.’ I surely found it unpleasant. Wrong decision. But it already happened. I apologize to Valeria Hontareva.”

He also thinks that the Verkhovna Rada (Parliament) should not revoke the choir’s performances at the opening and closing sessions. The incident did happen and cannot be changed but he understands it was wrong and apologizes.

Background. Valeria Hontareva chaired the National Bank in 2016 during the nationalization of “Privatbank” owned by Ihor Kolomoyskyi. She now works and lives in the UK. On August 27 Pecherskyi district-level court of Kyiv gave the permission to the State Investigation Bureau to enforce summoning Hontareva for interrogation in the case of possible embezzlement on the part of members of the National Bank’s board of directors.

On August 30 the former chair of Ukraine’s National Bank was hit by a car in London. Hontareva stated that Kolomoyskyi is threatening her and she is his “main enemy”. At night on September 5 a car registered after her daughter-in-law, also called Valeria Hontareva, was set on fire. On September 12 the State Bureau of Investigation searched the Kyiv apartment where the ex-head of the National Bank is registered. On September 17 the house of Hontareva family in Horenychi outside Kyiv burnt down.