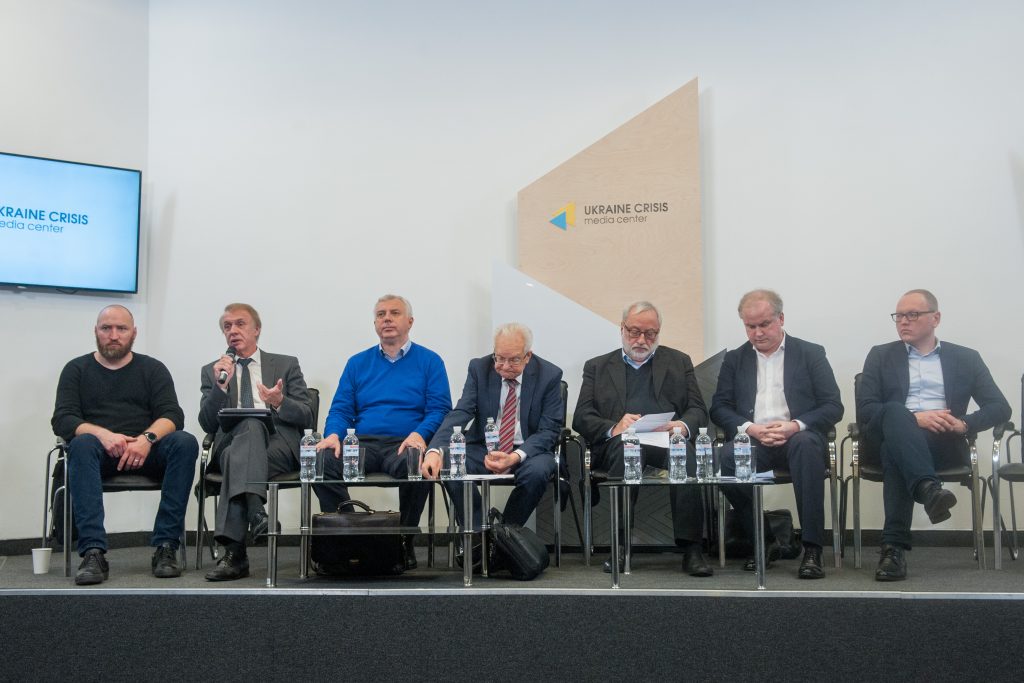 On November 4, 2019 the Resistance Movement against Capitulation presented the Ukrainian Security and Piece Doctrine. The document was drafted by members of the Movement’s strategic council that includes experts in international law and diplomats. What the document is about and how the vision expressed is different from the position of President Zelenskyi’s who has agreed to the “Steinmeier formula” and is seeking possibilities to hold the Normandy format meeting – read on.

Where does the idea of a new doctrine come from? Mykhailo Basarab, one of the coordinators of the Resistance Movement against Capitulation said the document contains the plan of peaceful settlement that is different from the one being promoted by the authorities. “The idea of the doctrine appeared after the authorities kept throwing accusations that those in dissent from its actions are just attending gatherings (Viche) against capitulation without offering anything substantial instead. This fundamental document describes the plan of peaceful settlement that is in line with the Constitution, the law of Ukraine and international law,” Mykhailo Besarab said.

What is in the document? The document comprises five parts. The first one describes the parties’ actual positions and justifies why the Minsk agreements are not a legally binding document.

The second part presents the Ukrainian vision for establishing a just and fair peace. The plan foresees engaging of independent armed peacekeeping contingents. It stipulates that before elections are held in the de-occupied territory, Ukraine needs to regain control over the state border in the east and pass a special law lifting criminal and administrative prosecution and liability for persons – participants of the events in Donetsk and Luhansk regions except for the persons suspected in having committed war crimes or crimes against humanity.

The third part envisages suggestions for preparation of the consolidated claim to the Russian Federation on the damaged caused by the aggression. The fourth part includes suggestions on the sanctions policy. It states that one of the priority tasks that Ukrainian diplomacy has is to enhance preserving and reinforcing of sanctions against Russia by the international community.

Why is there an alternative to Minsk? Volodymyr Vasylenko, auditor of the National Anti-Corruption Bureau of Ukraine, Ukraine’s representative to the United Nations Human Rights Council in 2006-2009, provided a detailed justification of why Minsk is not necessarily the only option: “From the standpoint of the international law the Minsk agreements are a void document, because its clauses were imposed by force. This conclusion is based on Article 52 of the Vienna Convention that concerns the law of international agreements, it clearly stipulates that any treaty procured by the threat or use of force is void. The Minsk agreements were forcibly signed by the Ukrainian side to stop the advance of the Russian aggression,” Vasylenko said during the presentation at Ukraine Crisis Media Center.

“It would be possible to apply selected security clauses but by no means to agree to the special status for Donbas and elections in the occupied territory before control over it is restored. Firstly, there is no standard for holding such elections. Secondly, there has been no case in history when free democratic elections would be held in the occupied territory. As to the special status being imposed – Ukraine needs to decide on its own, not under external pressure, what its constitutional forms of government are,” the expert proceeds.

The UN resolution mentions the Minsk agreements as existing agreements for political settlement without stipulating that they are a treaty as defined by the international law and are not binding.

“Ukraine is implementing its part of the agreements while Russia is refusing to. It is one more reason for Ukraine to be thinking that the Minsk agreements are a stillborn document. (…) A new algorithm needs to be found. Moreover, conditions of the Minsk agreements suggest that they were supposed to be implemented by December 15, 2015. It has not happened, so they do not exist,” wrapped up Volodymyr Vasylenko.

Impossible peace under Russia’s pressure. Volodymyr Ohryzko, diplomat, Ukraine’s Foreign Affairs Minister in 2007-2008 stated: “We forget that any lasting peace is only possible on a just foundation. Peace made under pressure will only become a precondition for a new war. Is that what we want to achieve? We cannot equalize two states on the scales. There is an aggressor state and a state that’s subject to the aggression. When they say that both sides are responsible – it comes as nonsense as seen from the standpoint of international law and common sense.”

“It’s an urgent need that our authorities realize that one may be playing a game with Moscow as an equal or surrender. The quicker they come to realize it, the easier it will be to proceed,” Ohryzko concluded.

No need to rush when disengaging the troops. Josef Zissels, executive co-president of the Association of Jewish Organizations and Communities of Ukraine, executive vice president of the Congress of National Communities of Ukraine said: “Speaking with such large-scale categories as disengagement of troops and international formats we should not forget about the people who will be directly affected – residents of the near-front area and our military. Different information pieces show that the start of disengagement of troops.., the disengaged troops are being moved to unprepared positions – the ones that are neither prepared for winter nor for strategic defense. (…) It is unacceptable to be rushing in this important process.”

The need to be searching for new formats: initiating the meeting of Budapest Memorandum signatories. Danylo Lubkivskyi, diplomat, Deputy Foreign Affairs Minister of Ukraine in 2014 said: “We have to initiate a meeting in Kyiv where signatories of the Budapest Memorandum but Russia as well as our closest western neighbors will meet to discuss common defense from the aggressor, ways of interacting with Moscow and arranging the space of common security. The key message is that independent Ukraine is a guarantee of long-standing peace in Europe and today Ukraine needs a comprehensive, smart and consolidated support from the international community.”