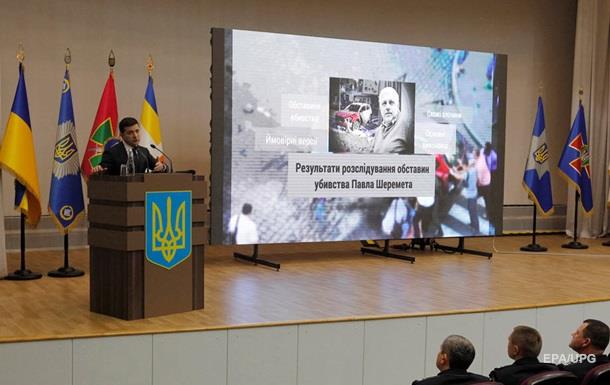 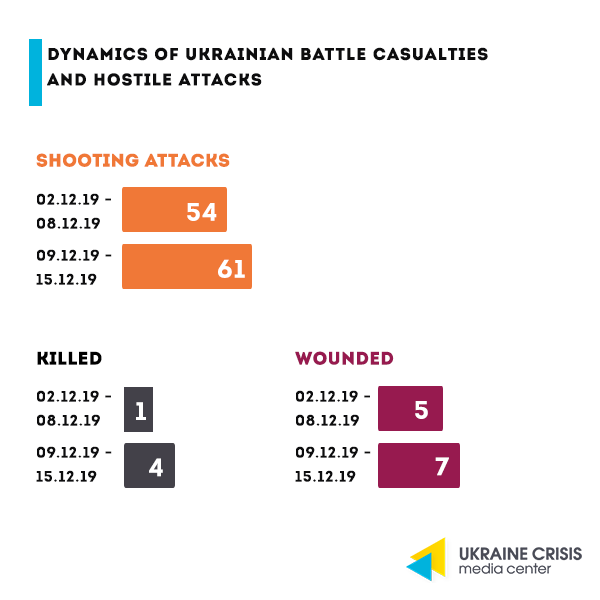 The Russian Federation does not respect the commitments on ensuring lasting ceasefire as stated in the final communique that was adopted at the Normandy Four summit in Paris.

“The Russian Federation continues ignoring the commitments on the lasting ceasefire that it took in accordance with the final communique endorsed at the Normandy Four negotiations in France,” the report reads.

Christmas-time ceasefire in Donbas may be announced on December 20 or 21. Besides, Ukraine is ready to suggest three more disengagement sites in the Joint Forces Operation area, said Vadym Prystaiko, Ukraine’s Foreign Affairs Minister, in a recent interview to UNIAN agency. 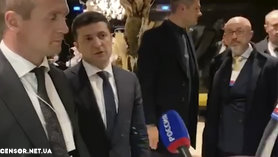 Television channel “Rossiya 1” aired a comment by the President of Ukraine Volodymyr Zelenskyi that the channel’s crew had earlier recorded on the sidelines of the Normandy summit in Paris. It was earlier announced as an “interview”, while it is actually a comment.

In the comment Zelenskyi emphasized the need to ensure flexibility of the Minsk agreements: “Minsk is Minsk but time goes by, times change. Our views are a bit different. I think our country actually sees it clearer, because it is our country and we know very well the people who live in the occupied areas. Important is that we all started communicating. It is paramount,” the President said. “I think it is the right start – the fact of the meeting in this format. We have a chance to achieve the result, which is the end of the war in Ukraine,” he added.

In the news program journalists of the TV channel emphasized that “in the last six years it was the first normal full-fledged communication of the President of Ukraine with Russian journalists.”

On December 12 Russian propagandist television channel “Rossiya 1” announced that the President of Ukraine Volodymyr Zelenskyi gave his first full-fledged interview to Russian journalists. The channel promised that the interview would be broadcast in the show “Moscow. Kremlin. Putin” on Sunday.

Press secretary of President Zelenskyi Yulia Mendel said she had nothing to do with organizing an interview of a kind. Later on air of “1+1” channel Zelenskyi himself refuted the information on the alleged interview to the Russian propagandist channel “Rossiya 1”. 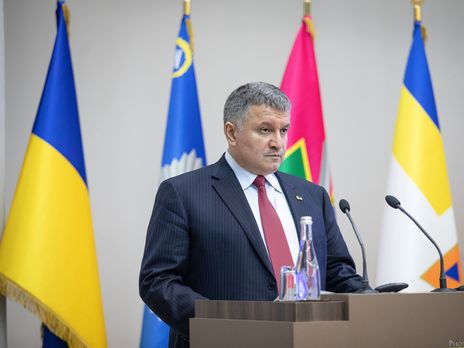 Pavlo Sheremet was murdered three and a half years ago. Most of the time investigation authorities kept quiet. On December 12, 2019 police detained two suspects and held a media briefing presenting investigation details. The briefing was attended by President Zelenskyi. Earlier Zelenskyi said that if there are no developments in the Sheremet case, top officials of the Interior Ministry will be changed.

Investigation authorities have at least five suspects in the murder, they are: nurse of an airborne brigade Yana Duhar, surgeon and army supply volunteer Yulia Kuzmenko, musician and combat veteran Andriy Antonenko, volunteer fighters and war veterans Vladyslav and Inna Hryshchenko (call signs Bucha and Puma). At the same time the information did not convince the Ukrainian society: no direct evidence of suspects’ involvement in the murder was presented at the briefing, phone call excerpts contain no information on Sheremet and could have been cited outside of the original context. Suspicions of murder are largely based on the fact that on the night of the murder cell phones of the suspects were off and that the suspects bear strong physical resemblance to individuals caught on the street cameras. At the same time the suspects are well-known on volunteer and veteran circuits. Many analysts are doubtful calling the demonstrative arrests politically motivated. UCMC looks into what the investigation authorities and the suspects are saying.

Police claim they were led to actual suspects when investigating other cases: the blast of a pole carrying overhead power lines in Chonhar and an attempt on life of a resident of Ivano-Frankivsk region. Investigators said they had analyzed all blasts in Ukraine and their attention was caught by similarity of the incidents in question.

Investigative authorities said they had identified the suspects after examining 20 groups, 80 million phone calls and footage from 221 street cameras. At the same time the motive of the murder stays unclear, investigation authorities said it was committed to “destabilize the situation in the country”.

The President and the Head of the State Security Service were present at the briefing, they both took a favorable stance on the investigation results.

What we know about the suspects 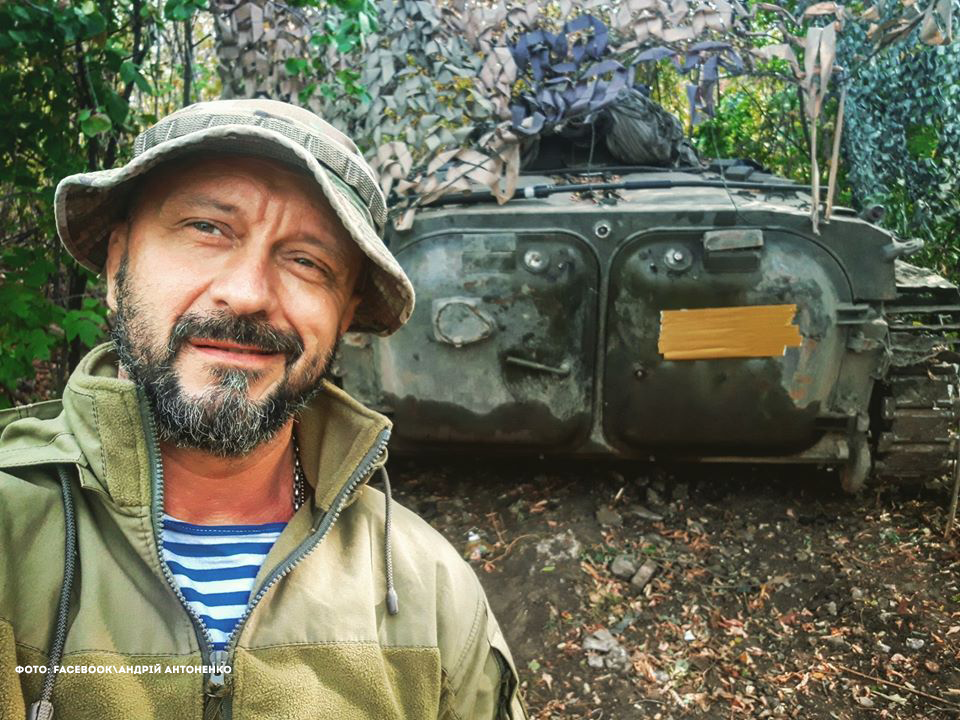 Andriy “Riffmaster” Antonenko. A Ukrainian musician, serviceman, sergeant of the Special Operations Forces of the Armed Forces of Ukraine. Starting from the early days of the war in Donbas Antonenko was helping the army as a supply volunteer, he later enlisted in the Special Operations Forces. Riffmaster’s song “Quiet to come, quiet to go” (Tykho pryishov, tykho pishov) is an unofficial anthem of the Special Forces Operations of the Ukrainian Armed Forces. Antonenko is well-respected by the veteran community and the military.

Investigation authorities insist that Antonenko was accompanying the woman who planted an explosive device under the car of Pavlo Sheremet. They emphasize the printing on clothes worn by the suspect as well as his pace: Antonenko had surgery on a leg a few months before Sheremet was killed, so he could be limping.

Investigation authorities claim they managed to trace Antonenko due to his involvement in another crime – the blowup of a pole carrying overhead power lines in Kherson region in autumn 2015. Back then on the crime scene located not far from the crossing with Crimea a man was spotted, he was wearing a printed T-shirt similar to the one worn by the possible co-murderer of Sheremet. Investigation also traced Antonenko because he lives close to Sheremet’s house in Kyiv.

Antonenko states he was charged unreasonably. He claims that on the night of July 20, 2016 he was in Vorzel, outside Kyiv. 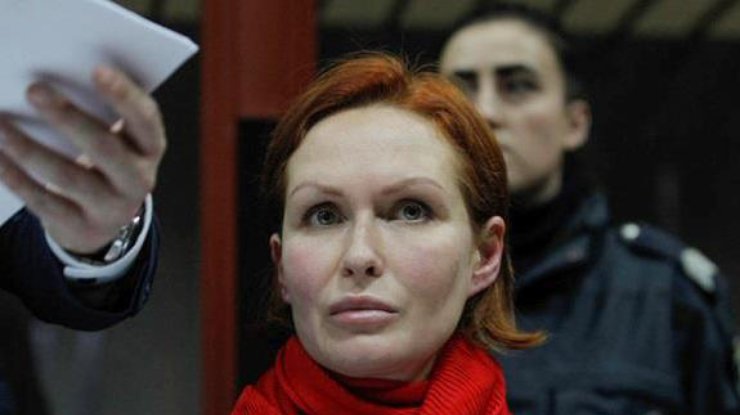 Yulia Kuzmenko is a pediatric surgeon at “Okhmatdyt” national children’s hospital, she used to help the troops in Donbas as a supply volunteer. Investigation authorities suspect her in planting the explosive device under the car of Sheremet at night on July 20, 2016. 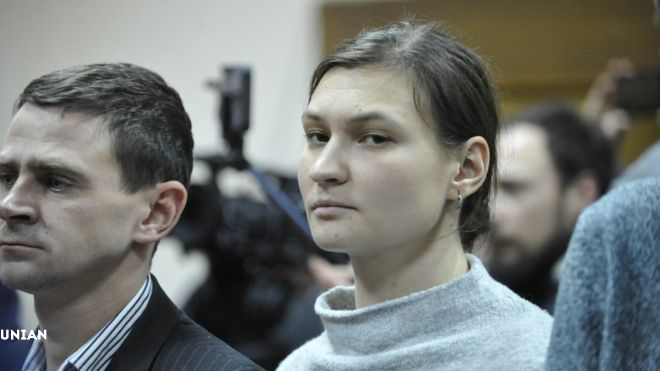 Yana Duhar is a nurse in the 25thairborne brigade. Investigation authorities suspect her in “conducting reconnaissance” near Sheremet’s house by photographing street cameras around the future crime scene with her cell phone. Police also released a tapped telephone conversation of the woman in which she was concerned about potential searches in her house, she said she keeps seven mobile phones and the sapper’s kit in her apartment. 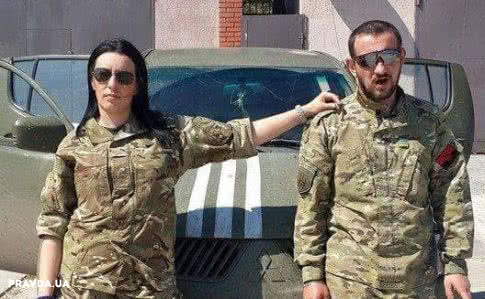 Vladyslav and Inna Hryshchenko. Vladyslav Hryshchenko,veteran of the war in Donbas was detained on September 24, his wife Inna – on November 5. Both are currently in pre-trial detention in the case of the attempted murder of Mykhailo Chekurak in Kosiv, Ivano-Frankivsk region. In late October the case featuring the married couple Vladyslav and Inna Hryshchenko was passed from investigation authorities of Ivano-Frankivsk region to the Main Directorate of the National Police.

In early November Ukrainian media learnt that investigation authorities might be considering involvement of Vladyslav and Inna Hryshchenko in the murder of Pavlo Sheremet killed in a car blast in Kyiv on July 20, 2016.

In late November the court extended pre-trial detention term to the married couple. Back then Vladyslav Hryshchenko said investigation authorities had offered him to plead guilty to the murder of Sheremet. He mentioned it in his speech pronounced in the Pechersk district court of Kyiv: “A man came to me, investigator or someone like that. He didn’t say what the case in question was. He just came and gave me this nice paper with four photographs. On one of them there was Sheremet who was blasted, on the second one there was Zhukov, Shapoval (intelligence officer Maksym Shapoval– edit.), a female journalist and the blast site in Chonharwhen electricity was not being supplied in Crimea. Guess what they told me. They said: if you take the responsibility for one of the cases, your wife will be released (from under arrest – edit.).”

Adding to the lack of trust to investigation results in the society is the judge Serhiy Vovk chairing the hearing. Defense lawyers of all the suspects asked to remove the judge from the hearing but their claims were rejected. Back in 2012 Serhiy Vovk found Yuriy Lutsenko guilty and sentenced him to four years in jail for alleged illegal celebration of the Police Day in “Ukraina” Palace. Later the European Court of Human Rights ruled that the decision is not in line with the international fair trial standards. Judge Serhiy Vovk also chaired the group of judges that sentenced the former acting Defense Minister Valeriy Ivashchenko to five years in prison. He was found guilty of abuse of office in 2009 when assets of Crimea’s Feodosia shipyard and mechanical plant were put on sale. European Court of Human Rights later recognized that Ivashchenko’s imprisonment was politically motivated.

What do defense lawyers and suspects say?

Yana Duhar. Yana Duhar’s defense lawyers emphasized that between June 3 and September 29 Yana was at a military base where she was doing surgeries. Neither the woman herself, nor her lawyers answered if she ever left the military base during that time. The lawyers also say that it is impossible that Duhar is on the street camera footage as suggested by the forensic experts, as Yana was not in Ukraine when the footage was recorded.

Defense lawyers also say that Yana is an orphan, while her guarantors reassure that she came to Kyiv for the first time in July 2017 when she received the award from then Defense Minister Stepan Poltorak.

Duhar was decorated with several awards as a combat action participant including the third-highest order “For Courage” and the medal “For Defense of Avdiivka”.

Yulia Kuzmenko. As to the second suspect, both Yulia Kuzmenko herself and her defense lawyer asked to interrogate her ex-husband who could allegedly confirm that she was at home at night between July 19 and 20, 2016 as well as the director of the hospital where Kuzmenko works. The woman claims she was at work at about 7am on July 20 and learnt about the explosion from the news: “My working day started at 8am. It was the first time then that I read about Sheremet,” Yulia said. In her speech in court Kuzmenko said that the Interior Ministry violated the presumption of innocence by mentioning her name during the briefing, it had thus “ruined her life”. She added that she will prove her innocence with additional examinations, investigation and polygraph tests.

Andriy Antonenko. The lawyer of the suspect Andriy Antonenko Kostyantyn Tatarchenko says the charges are not motivated: “I guess there is an order coming from the Interior Ministry and other public offices demanding that the crime is solved by the end of 2020,” the lawyer said.

At the same time the Office of the Prosecutor General emphasized that the investigation authorities discovered that before the search Antonenko asked another person to take a MON-50 mine away from him. The mine was seized.

In his speech in court Antonenko said that he is half Jewish and thus considers inappropriate the text of the warrant saying that he “cultivated the greatness of the Aryan race and differentiated the society based on nationality”. He also drew attention to his appearance noting that he does not bear resemblance to the man on the video: “Starting from 2013 I have a full beard. It can be longer or shorter but it is full. The person on the video has a goatee beard with his cheeks completely shaved. Secondly, the shoulders – mine are a bit rounded, my neck is a bit long, they don’t match. Please note – my ears are damaged as I do wrestling, the man on the video has his ears undamaged,” the suspect said.

Over 10 persons were eager to become Antonenko’s guarantors so that he can be released on bail. Among them is musician Oleksandr Polozhynskyi, spokesperson of the Special Operations Forces of the Ukrainian Armed Forces Oleksiy Nikiforov, MP and veteran Yana Zinkevych.