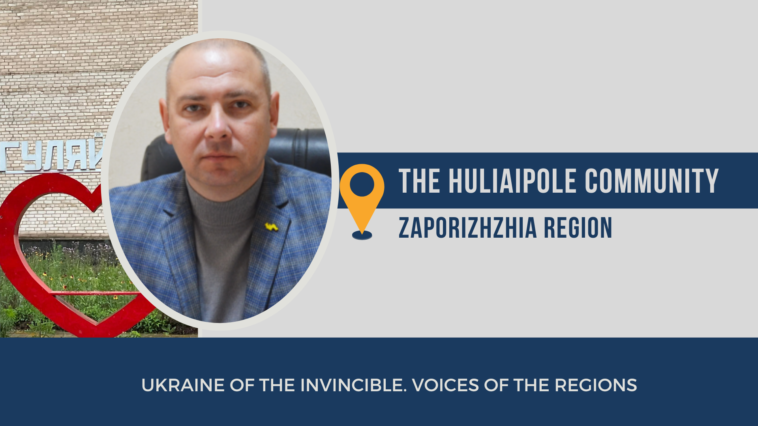 For five months, the Russian invaders have been unable to advance deep into the Zaporizhzhia region. One of the outposts of Ukrainian defense is the Huliaipole community. They are good here not only at fighting, but also at administering, and have proved this since the local self-government was formed.

Previously, Huliaipole was a district center, but now the area for which the town is responsible has been reduced by half. Today, it is 670 square kilometers, and each of them is full of war.

Huliaipoleis a small town known primarily for being the birthplace of Nestor Makhno. His house has not survived, but the house where his relatives lived was bought by the local community for a museum.

Now nobody remembers it. A few kilometers from the city, the front line cuts with a hot blade through life. Day after day, its streets turn into ruins, and the people who remained in Huliaipoledream of only one thing – to survive.

It is difficult for a journalist from the outside to focus on something in particular, while looking at pictures and videos of this pain. Everything seems important – every face, every trace of a ruscist missile.

“Life is writing stories that will be recollected after the war,” says Mayor Serhiy Yarmak. “But now the most important thing is safe evacuation of people. We do this under shelling. We ask people to go to Zaporizhzhia. It’s free, everyone can do it, and people are housed in dormitories there. However, the elderly do not want to go anywhere. They say they will stay here.”

Unfortunately, he continues, they are not fighting with the military, but with the civilians. Almost all the infrastructure is destroyed. Six of the eight schools are destroyed. During the shelling, the hospital, the Administrative Services Center, and the cultural and sports complex were damaged. Over 500 houses are destroyed in the town.

Shops practically do not work. If one is opened, it is not for long. Agricultural enterprises that have the opportunity to work are still holding on somehow.

Before the war, about 20,000 people lived in the community. Now, there are 4,000 left, taken care of by the community, volunteers, and the military-civilian administration of the region.

Old partners do not forget either. Previously, they helped to find ways of development – now they bring things without which Huliaipolecannot survive. Recently the DOBRE program together with the International organization Help Ukraine 22 – Operation Palyanytsya with the support of the NGO Association of Responsible Citizens provided the community with two 8 kW gasoline generators and one 20 kW diesel generator. The diesel provides Huliaipolehospital with electricity. And the two 8 kW generators help to maintain sanitary and environmental safety at the sewage treatment plants and constantly pump water into the water tower of the Zapovit district, as well as ensure water intake for the community’s fire department.

Yarmak admits: “If we could turn the clock back, we would have prepared the generators in advance. We didn’t know there would be no light for so long.”

This is how the Zaporizhzhia front-line town lives. In private houses, they cook over fire. High-rise buildings are almost empty. If people still live there, they use potbelly stoves that volunteers had given them to heat up food.

According to the head, those who remained in the city believe that the enemy will be defeated:

“Many guys from Huliaipole have joined the Territorial Defence, and you can see the result: we have been holding on for four months. We protect our land. Therefore, we cannot be conquered. We will stand like a rock.”

With the same firm confidence, Serhiy assures that Huliaipole residents are always ready for war, because Makhno’s blood flows in their veins.

The name of Nestor Makhno is also mentioned for another reason. The line held by local guys together with the Armed Forces of Ukraine is called the Makhno arc. It is difficult to say whether this term will be preserved in future history textbooks, but the chevron “Fear God and the boys from Huliaipole” will undoubtedly supplement the collection of the town’s local history museum.

There were fierce battles here in the spring. At the entrance to the city, as a reminder of this, you can see a destroyed Russian IFV-3. It is said to have been hit with a single Javelin shot. As a result, the IFV tower was shot off, its crew and all the ammunition were scattered. Thus, the advance of the enemy convoy was stopped.

The Russians started shelling the community center as early as March 3. Then the town was practically encircled, all that remained was the exit to Pokrovske. But the enemy did not advance further. The Russian invaders even called it an “evil city” for their futile attempts to seize Huliaipole.

Not to mention the shooting down of two Russian helicopters by a Ukrainian military man on his birthday. He learned how to use the Igla portable anti-aircraft missile system just the day before.

Our boys have made many such gifts for themselves at the Makhno arc. And they will make even more, the community head is sure.

It is difficult for him to imagine the first day after the war. He believes that the most important thing is for people to return and begin to restore the territory.

Despite the ongoing destruction and shelling, the life in Huliaipole continues to be maintained, like fire is kept burning. As of April 7, the issuance of pensions was resumed. Pensions are brought home to the Huliaipole community residents, if they received it in this way before the war.

Managing the city in this situation takes away strength. Yarmak looks like a strained nerve, speaks briefly, weighs every word, calls on the townspeople to be together. He says that now there is only one party – the Huliaipole Territorial Community!