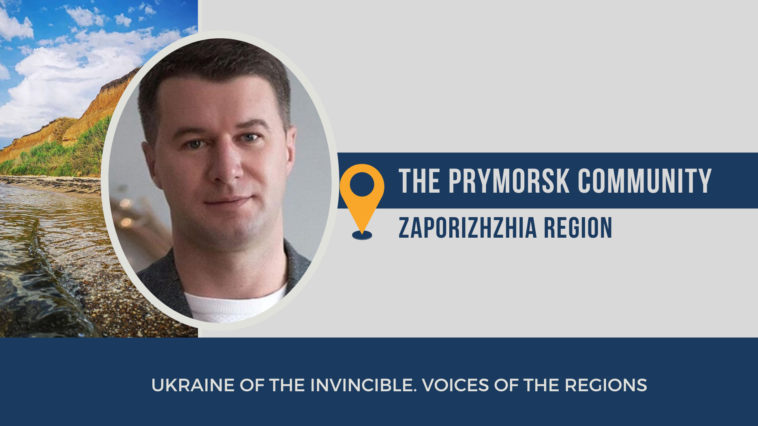 In June 2020, 17 villages and 2 small towns of Berdyansk district, Zaporizhzhia region decided to join the amalgamated community with the center in the town of Prymorsk. A new local self-government with an area of 1,000 square kilometers and a population of 24,000 people appeared in the Zaporizhzhia region.

Quiet and cozy Prymorsk was a favorite vacation spot on the Sea of ​​Azov for people from Zaporizhzhia and other regions. Here, they swam, sunbathed on the beaches, walked in the parks, and had fun at the attractions. However, the Russians “liberated” thousands of families from sea vacations.

The town was occupied in the first days of March. Normal life and active tourism can be restored only after the south of the Zaporizhzhia region is liberated and the sea and beaches are demined. Oleksandr Koshelevych, head of the Prymorsk community, told us about the community’s current experiences and challenges.

He is one of the leaders of whom they say in this difficult time: he has not betrayed his principles, voters, Ukraine. He was kidnapped by ruscists. During the hot days of this spring, together with the townspeople, he went out to protests almost daily, chanting: “Prymorsk is Ukraine!” In front of armed soldiers, he sang with everyone “Soul and body we’ll lay down…” Until the last, he remained in the temporarily occupied town and supervised the work of communal services.

“People live in terrible conditions in the occupied territory,” admits Oleksandr. “There’s a severe humanitarian crisis, a catastrophic situation with medicine and pension payments, constant psychological and physical pressure from the occupiers.”

He knows exactly what he is talking about. The occupiers kidnapped him, using the dirtiest blackmail methods, so he felt moral pressure and other abuse to the fullest. When ruscists could not find the head of the Prymorsk community, they kidnapped his father in order to take revenge. Then the mayor exchanged himself for his father, voluntarily surrendered.

Fortunately, all ended well. Oleksandr Koshelevych and his family now live in relatively safe Zaporizhzhia. Despite all the obstacles, he does everything possible and impossible to support people in the Prymorsk community, so that they do not feel abandoned.

“As a community, the local council was able to quickly respond to the challenges and circumstances that arose at the beginning of the war,” says the Prymorsk mayor. “We could quickly allocate funds for fuel and set up storage facilities. In my opinion, this is precisely the advantage of decentralization – the efficiency and speed of decision-making, the absence of unnecessary bureaucracy. The war is another test for unity, urgent response of local authorities.”

The head of local self-government is sure: the local council as a unit of power has fully justified its function and is an effective model of providing social and administrative services. And this achievement of decentralization of power in Ukraine in peacetime has its continuation in wartime. It is social and administrative services that are currently in the foreground. Local authorities, together with volunteers, deliver food, medicine, hygiene products and other essentials to the residents of the occupied territories. Because they are closest to people, their representatives are trusted and turned to for help, people often know them personally, they are supposed to solve daily issues, and are accountable to the community. It is not time for appointments and office meetings. Everything is decided from the wheels, with the phone in hand.

“The negative and painful experience of this war is the loss of colleagues,” the Prymorsk mayor says. “Although they are alive, they have sided with ruscists. This is not just betrayal of the country, it is betrayal of their home, of themselves. This is my belief.”

Among the main conclusions made by Oleksandr Koshelevych, while assessing the country’s resistance during the four months of the war, is the fact that we, the Ukrainian people, are capable of great deeds.

“I was impressed by the resilience, indomitability, openness and sincerity of many people,” he states. “First of all, I never thought that war was possible at all, but what we, Ukrainians, our brave soldiers, volunteers, have shown to the world is inspiring. On the positive side, I am most impressed by our people, who have opened their homes to refugees, who are helping in whatever way they can.”

Koshelevych is also inspired by how the whole world joined the people of Ukraine in supporting our victory. We must make every effort to restore a peaceful life, to build a wonderful, prosperous country in the near future.

That is why the struggle is ongoing and cannot be stopped. Partisans are also active in the temporarily occupied Prymorsk. They leave messages for local traitors who collaborate with the occupiers. “Certificates of honor” – photos of collaborators with their names and surnames – are pasted on trash cans.

These leaflets are a reminder of the inevitable fate that awaits these people – the arrival of the Armed Forces of Ukraine and responsibility for what they have done. The leaflets also appeal to collaborators and those who sympathize with the occupiers, with a reminder: nobody wants traitors anywhere.

But there are very few of them. Ukrainians cannot be defeated because we know how to unite and be united, we are not afraid to defend and fight hard for our own. “For me, heroes are primarily our volunteers and activists,” Oleksandr Koshelevych notes. “Of course, I am also proud of our military. However, when the community is under occupation, it is volunteers who arrange deliveries to the people: hot lunches, firewood, food kits.”

If the mayor of Prymorsk were told in February 2021 that a war would begin within a year, he says, he would not have believed it. “But if we had known it, we would have prepared bomb shelters better, stockpiled food and fuel. We also would have worked on revealing potential collaborators in our ranks,” Oleksandr Koshelevych says.

The question of what the first morning after the war will be like made him ponder.

“We are all looking forward to it and believe it will be the biggest holiday. People will definitely walk out onto the streets and start hugging each other,” the exiled mayor says. “We had many plans for community development before the war. I know that with the victory we will get to work even more zealously and diligently.”

Oleksandr Koshelevych knows what he is talking about. A wonderful piece of land on the shore of a warm sea, the most native and unique, deserves to be turned into a pearl of Azov after it is reset and cleared of the filth and hatred of the occupier.