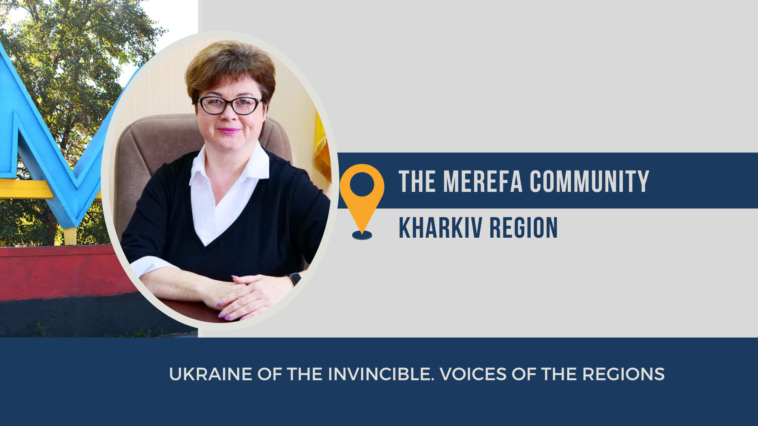 This is how residents of the Merefa community located 20 kilometers from Kharkiv and uniting 9 settlements call themselves. There is a historical evidence for that – in the 17th and the first half of the 18th century, the settlement was a defense stronghold against Tatar raids.

Until 1765, Merefa was a sotnyk town of the Kharkiv regiment (in the 18th century, local sotnyks were representatives of the Shcherbyn Cossack family). The town had its own symbols: a sotnyk flag (with the image of St. Peter the Apostle) and a sotnyk seal (with the image of a heart topped with a cross and pierced crosswise by a saber and an arrow).

In 1668, Ivan Sirko founded a hamlet near Merefa, which was later inherited by his daughter. She married Ivan Artemov, the hamlet was named Artemovka, and in 1928 became part of the town.

It is assumed that Ivan Sirko came from Merefa and took part in populating these places. In some chronicles, the settlement was even called Sirkivka.

The bust to Ivan Sirko which is in the central square of the town and is a local symbol of the struggle for independence reminds us of those times. The Kosh otaman looks towards Zaporizhian Sich and seems to say: the enemy will never conquer this land.

“We have always been proud that he protected our land,” says Tetiana Diadchenko, secretary of the town council. “30 years ago, caring people independently raised funds for the installation of the bust. And when today the question arose, whether it should be sandbagged, as they did in Kharkiv with the monument to Taras Shevchenko, we decided that he should continue protecting the community, and for this should see everything around him.”

Now Merefa is a front-line town. Thanks to the soldiers of the Armed Forces and Territorial Defense, there were no hostilities here. But can we find a corner of Ukraine that was not affected by the war? During the aerial bombardment of Yakovlivka, 5 people were killed and 11 more wounded. A total of 112 private houses were destroyed. Over 300 buildings were destroyed or damaged in the community. The town house of culture, a secondary school, and civil infrastructure facilities were destroyed.

Tetiana Petrivna will remember February 24 for the rest of her life:

“My son was called to duty by an alarm signal. His things were already packed – he had prepared earlier for those events. I couldn’t stay at home either and went to work. The head of the military registration and civil defense department arrived. The two of us were sitting and thinking what to do. We immediately took the legislative acts, read them and discussed what our first steps should be. We started mobilization work and made an announcement about the collection of things. A lot of volunteers came.”

There is a transport connection through Merefa in the direction of Dnipro, and Diadchenko says that there were three days of endless traffic from Kharkiv. It was impossible to cross the road.

The horror lasted two weeks. Stores and ATMs were closed. They had to organize at least a delivery of bread. They made arrangements with entrepreneurs, contacted the neighboring community that had a bakery.

“We were looking for flour and yeast,” recalls the secretary of the community. “We found them only in Kharkiv. Our mayor went there under fire. Then we got a call from babies’ home in Kharkiv, asking for help – they had neither baby food nor milk. We found them. Again, the mayor took them by his transport to Kharkiv. What else could we have done – there is no such thing as other people’s children.”

In the first few days, there was no coordination of actions between the district and the region; there was a lack of communication. Then it got better. They managed to overcome that chaos thanks to consolidation, and because everyone was busy. This way, they managed to stabilize the situation, although it took some time.

By the way, the Merefa community was the second in the region to join the decentralization process. In that process, it gained experience, new knowledge, and support in the implementation of development projects. And this strengthened the resilience of the community, people felt what it was like to be united. And when an invader came to their native land, they completely forgot what criticism or opposition is – now everyone is determined to win.

Tetiana Petrivna recalls a touching incident: “Once, a 90-year-old woman came to the Administrative Service Center, where a humanitarian headquarters was set up, and said: “I brought a thousand hryvnias for our military.” Such are our people, and this once again explains why Ukrainians are invincible.”

Indeed. Imagine that you built a house, planted a garden, a vegetable garden. So why the hell should you give all this stuff away? You should defend it, and descendants of the glorius Cossacks have always been able to do this.

In wartime, the communities have gained organizational experience. Tetiana Diadchenko is convinced that every local self-government body should have a plan of actions in case of an emergency with clearly defined algorithm and notification system: who calls who, who does what, who is accountable for what.

“Now everyone knows that it is necessary to prepare for war. On the one hand, it has been done for 8 years; however, it seems, formally. It is difficult to say which communities were able to set up bomb shelters. There were not enough backup generators and water wells in the communities. Neither there were any instructions on what a head of the occupied community should do. We have a lot of such communities in the Kharkiv region,” she admits.

It is not difficult to calculate the Merefa community’s demographics. A third of the residents have left the community. At the same time, almost 7,000 internally displaced persons have arrived. Many of them come with a request for employment.

“In most cases, we have to refuse. There are no jobs – enterprises have been evacuated,” explains the woman. “The economic situation makes communities of the Kharkiv region switch to part-time work. As for us, we try to work in the existing conditions.”

Despite this and the proximity of hostilities, the community is getting by. All its structural divisions are working. Services are provided. Communal services work, landscaping is maintained, flowers are planted, trees are trimmed, and streets are cleaned. Shops and pharmacies are open. Although not in full, transport connection with the regional center has been established

Like everywhere, the local budget is suffering here. Like everyone else, the community adapts to wartime conditions.

“Some reserves have been accumulated earlier; something is being done on our own. Our people brought their flowers and planted them. Because we want to make the city beautiful even in such difficult times,” Tetiana Diadchenko says, and this is inspiring.