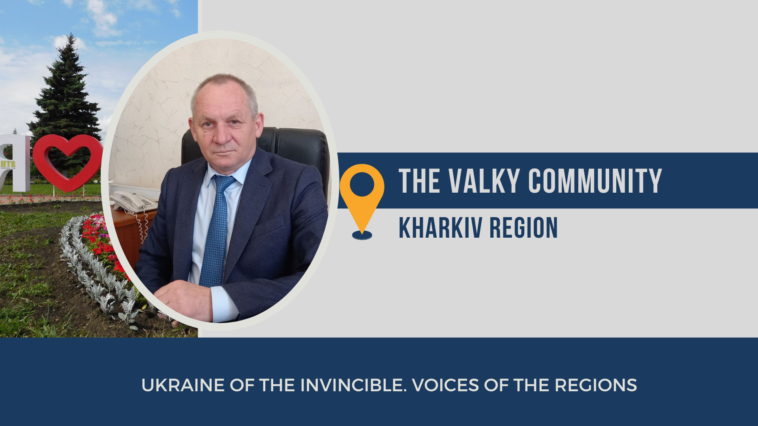 They have their own Maidan – that’s what we can say about the Valky town territorial community in the Kharkiv region. Maidan is the name of one of the villages. In total, there are 100 settlements in the community. Previously, they were part of the Valky district, but decentralization of power allowed them to unite into an independent entity with an area of 1,019 square kilometers.

People from Valky, the community administrative center, have long been known for their love of freedom. In 1812, there was a conflict between Turkish prisoners of war and the local population, known as the Valky tragedy. In 1902, during the uprising, the peasants destroyed more than 25 landlord’s estates, and after the February revolution in St. Petersburg, the liberation movement led by Ukrainian national democrats intensified in Valky and the district. In April 1920, a large popular uprising began in Valky, the Ukrainian People’s Government was elected, and communication was established with the rebel units of the neighboring districts. The new haidamaks (half of whom had only scythes and pitchforks) set free those mobilized for the Red Army, disarmed the occupiers, and seized weapons and military equipment.

Did the Russians think they would be able to conquer this land?

“People like that cannot be broken or subjugated,” Valky Mayor Valeriy Skrypnichenko agrees with me. “Besides, our people are very smart and resourceful. We know how to find a way out of seemingly hopeless situations. Just remember how, having no weapons to destroy the enemy, a lot of people made the so-called “Molotov cocktails” at home. Can anyone intimidate or defeat these people?”

According to Mr. Skrypnichenko, Ukrainians have shown their spirit of defiance and desire for independence for many centuries, and especially now. Another important thing is the ability to forget the disputes and unite because when the going gets tough, the tough get going.

“Speaking about our community, it is worth mentioning that the people of Valky have supported our defenders since the first days of the war,” the mayor continues. “We collected food, clothes, money for our soldiers. People brought what they could to volunteer collection points – canned food, vegetables, ready-made meals, pastries. The owners shared livestock – gave pigs and bulls. The villages of Zamiske, Snizhkiv, and others processed that meat into stew. Everyone wanted to contribute to the victory. Recently, when we announced the collection of berries for wounded soldiers undergoing treatment in the Kharkiv hospital, people of our community actively shared the harvest from their gardens and orchards, and also added pickled cucumbers, tasty pies and other things. And some, who didn’t have their own berries, bought fruit for our wounded defenders at the market.”

In the first days, when Russian military aggression affected towns and villages throughout Ukraine, including Kharkiv, which is only 50 kilometers from the Valky community administrative center, no one knew how events would unfold, what to expect and what to prepare for . But one thing was clear – both the local authorities and the residents of the community should join forces to fight back the aggressor if necessary.

Therefore, the first steps were aimed at sustaining the community and providing effective support to the Armed Forces, Territorial Defense, law enforcement agencies, and emergency services.

With the beginning of full-scale hostilities, it was natural to foresee problems with fuel supply. Actually, they arose already on the first day, when cars with people fleeing artillery and air strikes on Kharkiv and neighboring settlements drove in an endless stream along the Kharkiv-Kyiv highway, which runs through the community. So, they focused on creating a reserve fund of fuel and lubricants. Consumption was under strict control, and thanks to this reserve, the community managed to support the work of critical infrastructure enterprises – CE “Water”, “Blahoustrii”, Valky central district hospital, Valky center of primary medical and sanitary care, law enforcement officers and rescuers, other services. They also provided buses to evacuate people from Kharkiv, and promptly resolve transportation-related issues. In cooperation with deputies and village heads, they solved the problems of providing medicines and flour, so that there would be no shortage of bread in the community.

“I would like to mention how our community accepted and accepts IDPs. Already in the first days of the war, the evacuation of Kharkiv residents was organized with the assistance of the town council. For almost a month, several buses went to Kharkiv every morning to pick up people who did not have their own transport. Our drivers repeatedly risked their own lives on these trips, but continued transporting Kharkiv residents. Some of the evacuees went further – to the west of Ukraine and other countries. But the majority remained in our community. Therefore, it is not surprising that the Valky community has the largest number of IDPs among other communities in the region – 20,270 people are officially registered. This is only 8,000 less than the population of the Valky community before the war. IDPs stayed both at their relatives’ and at locals’ houses and apartments. We housed part of them in the premises of communal institutions adapted for this purpose. We try to help and support everyone who needs it. In this regard, the town council cooperates with volunteers and the Red Cross Society, so that neither IDPs nor local socially vulnerable residents are left alone with their problems. And this is only a small part of the issues that needed urgent solutions. We solved them together, because decentralization had created real opportunities for the effective and prompt work of local authorities,” Skrypnichenko notes.

According to him, the war enhanced the community’s ability to respond to crisis situations. Previously, in addition to the district state administration, there was also a district council, as well as village and settlement councils, which had their own administrative staffs and their own budgets. As a result, it took a lot of time to agree a decision, let alone to implement it. And if it was related to finances, it was even more slow-going. The community head cannot even imagine how all this would have worked during the war.

Now the community is a single mechanism where all decisions can be made quickly. This made it possible to quickly focus on the most important issues.

Skrypnichenko admits that not everything goes smoothly and perfectly; there are problems: someone complains that humanitarian aid is not brought as often as they would like; some seem to have the excessive appetites for such hard times. But the community strives to find compromise solutions, to agree with volunteers on coordination of actions, so that humanitarian aid is distributed throughout the community to those who need it.

“I’m well aware that some of our IDPs will stay in the community for a long time,” the head says, “because people simply have nowhere to go, their houses and apartments have been destroyed by Russian “liberators”. Therefore, we have to look for and find solutions for their employment. So we are working on this as well – we regularly inform about available vacancies in the community, and the relevant state programs. We are seeking opportunities for the construction of housing for IDPs willing to stay in our community. We have an agreement on this with the regional authorities, our People’s Deputy Oleksiy Krasov, and we are deciding on the potential construction sites.”

The Valky community is already planning its future life, in particular, it is developing the main roadmap – the Community Development Strategy until 2027. Not only activists, but also many residents were involved in the development of the draft document in order to determine priorities correctly, according to the needs and demands.

“I am sure that among them will be not only the repair and construction of roads, the improvement of landscaping in our settlements, the further development and improvement of medical, educational, communal, administrative and other types of services, but also the projects that have been suspended during the war. I mean the construction of the “Land and Water” industrial park with the attraction of huge foreign investments (by the way, potential investors maintain a lively interest in the realities of our present and, as they say, they are at a low start in anticipation of our victory); arrangement of the tourist cluster “Sharivski Karyby”, skansen – an open-air museum near the village of Viytenky, where archaeological excavations have been going on for almost two decades, in which not only domestic, but also leading foreign scientists take an active interest. By the way, these sites will require a lot of qualified personnel, and we are counting on both local residents and specialists from among IDPs,” the mayor clarifies.

There is no doubt that the community will implement all these plans. Because, fortunately, there is no need for reconstruction at the moment, and hopefully it will continue to be so. After the victory, everyone should focus on the development of their Valky community. What they should do first is to support the families who have received death notices, and to thank everyone who has brought this day closer. And this, Skrypnichenko is sure, will take more than one day.