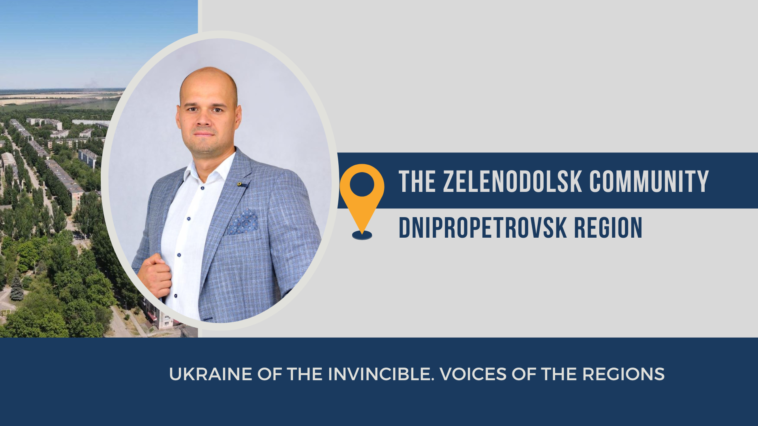 Almost every region of Ukraine has a city built during the Soviet era for workers of a large industrial facility. In the Odesa region it is Pivdenne, in the Mykolayiv region it is Yuzhnoukrayinsk, and in the Dnipropetrovsk region – Zelenodolsk.

Since July 2015, it has also been an administrative center of the community of the same name. It is small – only 4 settlements, but very capable. Not every little local government can boast of having a large industrial facility on its territory. In this case, it is Kryvorizka TPP – one of the most powerful thermal power plants in the country. Electricity from here not only feeds the central part of Ukraine, but is also supplied to neighboring Poland.

No wonder such a giant is the main tax payer to the local budget and the main employer. Up to 90% of the population of Zelenodolsk works or worked at the station. Among them is the town mayor Dmytro Neveselyi.

He is 36 years old. Born and raised here. He majored in thermal power engineering at Kryvyi Rih National University, and then worked at the TPP for 12 years. Later, he became a manager of relations with local self-government bodies, in this position he understood how to manage the town. Since then, he has been involved in small-scale politics: he was a local council deputy for 5 years, and later was elected mayor. This choice was made by the townspeople.

The main goal of Neveselyi’s team is the strategy of turning Zelenodolsk into a place of comfortable living for people from larger industrial agglomerations like Kryvyi Rih. They planned to attract them here with three magnets: safe environment, modern education for children and nature.

And it worked. People from other cities were increasingly attracted to the idea of ​​choosing Zelenodolsk as their home. It is calm, safe, no parking. There are places to relax, things to see, children study in good conditions. There are no environment problems: Kryvorizka TPP is built in such a way that the wind rose does not allow emissions to enter the city. And after the reconstruction, it is not even noticeable that its chimneys are smoking.

Historical hubs were developed, tourist routes were planned. With the latter, there is room to expand: two large ponds, a recreation area, fishing, gorgeous views. There is also a lot to see in the village of Velyka Kostromka: both Cossack culture and the remains of World War II concentration camps.

Small and medium-sized businesses were supposed to attract visitors. The community lived as a business park, each element of which developed separately: solar energy production, a European-level terminal for harvesting and transporting grain. They even bred fish and extracted black caviar, and one of the villages had a snail farm – one of the five largest in Ukraine. Beekeeping was developed traditionally. This is how the community development strategy was implemented step by step until the morning of February 24.

“At five in the morning, my colleagues called me, and within an hour I was already at the workplace,” Dmytro says. “We started building checkpoints. We understood where the threat could come from – the Kherson region, the administrative border with which stretched for 70 kilometers. We created the Territorial Defense, quickly recruited people and distributed the available weapons to them. That’s how we defended our area.”

The local council understood that later there might be problems with food and fuel, so they placed stockpiles of them in different parts of the city. It ensured that if there was a siege, they would be able to provide people with food and medicine.

People from the south kept coming.

“Residents of the Kherson region escaped as they could. They rode bicycles to transport themselves, their relatives, and their belongings. They used even trolleys for transportation. Some were taken out on beds, among them the sick and paralyzed. Someone just ran. They ran away from the occupiers across the fields,” Neveselyi recalls. “The Russians abused them. Wounded and raped people came to us. We provided them with first aid, clothes, food and then sent them by bus to Kryvyi Rih or other cities of Ukraine with the support of the Kryvyi Rih military-civilian administration and the district administration.”

Then they decided to keep all refugees’ belongings and bicycles in Zelenodolsk, and give them back when people return home.

During the first two months, local people also left. However, 70% of them have already returned. The reasons are different: they ran out of resources, they decided it was better to be at home with their families than far from them. This is their personal choice. They know that they are returning to the frontline. And although there are no battles directly in the community, it is shelled regularly. During this time, there was everything: cruise missiles, Grads, Uragans, Iskanders, phosphorus bombs. Zelenodolsk and Velyka Kostromka are particularly affected: high-rise buildings, private sector, infrastructure facilities.

Assessing the five months of war, Dmytro Neveselyi says that a nation is being forged before our eyes, and the independence of the state is being defended. A new country with new views and values ​​is already being built.

“I have realized,” he continues, “that I am proud to be Ukrainian and live on this land. I was impressed by the people’s desire to defend their territory, as well as to do everything they can to bring victory closer. This applies to everyone – utility workers, doctors, pharmacists, rescuers, ordinary sellers in stores.”

He is also proud of his team. He is glad that he was not mistaken in his choice.

To the question “How do you see the first morning after the war and what will the community do first?” he answers:

“First of all, I will gather people to thank them for the work they have done. Then I will record a video with an appeal to all residents of the community to return home. As for practical actions, I think we will first deal with the problem of damaged housing. People need somewhere to live, they cannot wait. The state, given the scale of the problem in the country as a whole, will not be able to solve it immediately. Contributions are also a long process. So, we will get down to business. It was not in vain that we once united into a community.”