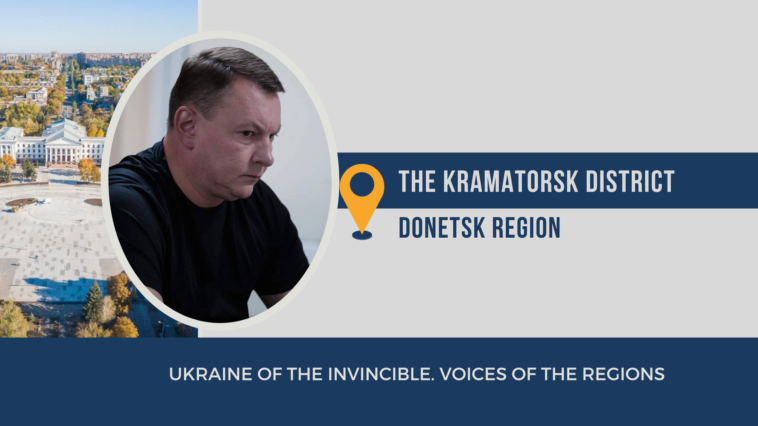 Ukraine’s local government reform had several stages. During one of them, the Donetsk region was divided into five administrative districts. Kramatorsk united 12 territorial communities with a population of over half a million people. After the occupation of Donetsk, Kramatorsk became an administrative center of the Donetsk region. The city is known not only for machine-building plants. It is also called Ukraine’s unofficial capital of jewelry.

“The big war” came here on the same day as to other cities of Ukraine. The first explosions were heard here before dawn. Although the east of Ukraine had known war since 2014 and had not forgotten it for a day, many experienced shock and horror in the first days of Russia’s full-scale aggression.

Soon there were first “arrivals”, which led to the first civilian deaths, destroyed homes and civilian infrastructure. And then there was a terrible tragedy at the railway station, which killed dozens of people in a flash. And then… How many more of those “then” were and will be?

Some needed time to come to their senses and decide what to do next. Some, without thinking twice, took up arms and stood up to defend their country or plunged headlong into the whirlpool of the volunteer movement. And some, having neither the right nor the time to think, went on doing their job, because they couldn’t allow chaos or panic under any circumstances, they had to methodically and confidently adjust the life of the district to the new challenging conditions.

The district head Andriy Pankov tells us about those new conditions and challenges, as well as what plans the Kramatorsk district has for life after the Victory.

“How is the frontline getting by during the war?” my interlocutor starts the conversation with answering this question.

“We continue evacuating civilians, and this is the main challenge of the last few months. Saving lives, protecting children and taking care of the elderly is our priority. All branches of government are constantly engaged in this. I would like to take the opportunity and address those who are currently in the communities of the Kramatorsk district.

Dear compatriots! The fact that Ukraine will win is a matter of time, but during the martial law, the civilian population has a very important task. You are the rear; each of you must protect yourself and your families as best you can. Staying in the territory of the district is becoming more and more dangerous every day, so I urge you to immediately evacuate to safer regions of the country.”

The war disclosed a lot to the people of Kramatorsk in 2014, but these last four months have become like a litmus test for everyone. Of course, we want to focus on the good things: the strength of our army, the unity of the authorities and residents of our communities, volunteer and public activities. However, everyone understands that there are losses, both physical and moral. The head of the district council is grateful to everyone who is there, who is dedicated and works hard: defenders, doctors, rescuers, policemen, utility workers – because now these people have a lot of responsibility.

“Unfortunately, the district also has a negative experience,” Pankov admits. “Occupation propaganda and manipulative intimidation of the population are becoming more active. It is very painful that there are cases of collaboration in our district. I do not pass sentences, there are competent bodies and services for this, but we all understand that there are traitors.”

Knowing what war is, the Kramatorsk district could not help but prepare for its aggravation. More than a year ago, they started working here under the updated administrative and territorial system.

“Before the full-scale invasion, we had joint plans with the communities, but the morning of February 24 made drastic adjustments to the socio-economic development of the district. The Donetsk region has been at war for the ninth year. It seems that we all felt something, because during that year we did a lot of work, all communities became part of a single team. They are ready to help each other not only in words, but also in deeds. Many issues are solved at the level of mutual assistance. Right now unity is motivating. Simply put, we are all in the same boat, all with the same goal. There is a retrospective, but it is more about external challenges,” Pankov says.

In his opinion, now is the time when every power structure is important: “Horizontal communications work very effectively. We have our own experience and the experience of our colleagues from all over Ukraine. This helps speed up the resolution of many evacuation, humanitarian and logistics issues. Currently, our effectiveness is measured by the speed of decisions made and lives saved. We are open 24/7. Nowadays, all Ukrainians have one common goal – Victory over the occupier, and it is getting closer every day. So now is not the time to give grades. When there is Victory and there is peace – then we will talk.”

Permanent recording of the damage, localization of damages and losses is currently underway. The occupiers mercilessly destroy civilian objects and infrastructure every day. The situation is constantly changing, we suffer losses every day. However, the head of the district has no doubts that everything will be rebuilt. The most important thing today is to save people’s lives.

“We have already united, we are all together, we are keeping the line on all fronts and bringing Victory closer,” he continues. “It is inevitable, because we have what our enemy does not have: courage. In my opinion, this word most accurately describes the national spirit of Ukrainians. Residents of our district are no exception. Musicians who participate in charity concerts and raise funds for the support of the army; athletes who become champions on the international stage; volunteers and public activists who continue to help displaced people – in every city, town and village of our Kramatorsk district, dozens of people are devotedly and persistently working for Victory. Each of them is a Hero, each is an example.”

Towns and villages of the district are the frontier where the country independence is defended. Further success of the Ukrainian army will depend on how the situation will change here. And the hotter it is at the front, the brighter the Kramatorsk residents imagine the first day after the Victory. Andriy Pankov will start it with hugging those he loves.

“This morning will be special for all of us,” he says. “It will be a real beginning of great work, because the country will begin a new page of independence and freedom. Many lives have been maimed, so we will primarily work on adapting the population to a new life. Life after the Victory – new, strong and full of plans.”