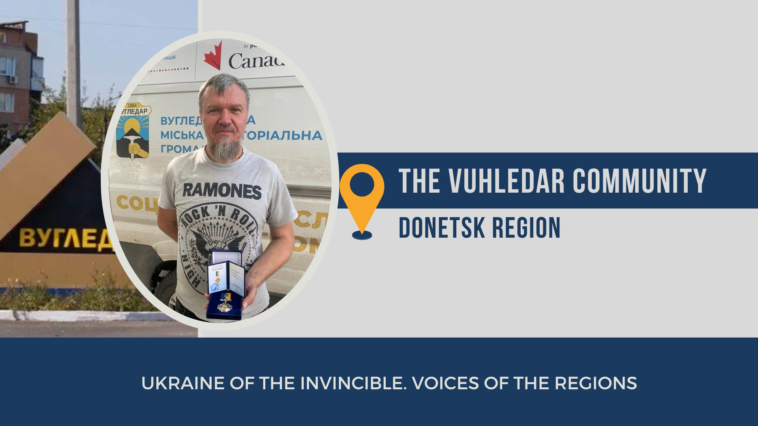 Vuhledar was founded in 1964 and was supposed to develop, but the Soviet economy leaders decided that the coal region of Southern Donbas was not promising, and focused on supporting Kuzbas. Until recently, two mines were still operating there. Now they are flooded. There are other jobs in the town. For a territorial community with a population of 26,000 people, it is a kind of survival test. Maksym Verbovskyi, the deputy head of the MCA (military civil administration), believes that they must pass it.

The poor areas of Donetsk and Luhansk regions are suitable for investigating cognitive dissonance. On the one hand, everything around is falling apart. 80% of the houses in Vuhledar are damaged, more than a thousand people, including children, still live in basements. The town was hit with Tochka-U cluster shells on the first day of the war. Then a missile fell near the hospital. Civilians suffered: four were killed and ten wounded. It is impossible to get proper medical care or to make purchases at a store in the town.

However, many people still believe that the shelling is carried out by the Armed Forces of Ukraine. Verbovskyi attributes this to the influence of Russian propaganda. Over the last eight years, all people of frontline towns without exception had unhindered access to Russian radio and television. Now they are convinced that only what they were shown on TV is true.

“Of those who remained in the city, 80% live in anticipation of the “Russian world”, says Maksym. “Despite everything, we continue delivering them humanitarian aid and, frankly, sometimes there is a desire not to do it. When you bring necessary things, and they suggest you “go somewhere to Dnipro” and let other people do their business here… They are sure that other guys will come and fix everything. Most people do not understand what is happening around, and are sure it’s possible that we will deliver humanitarian aid to Russia-occupied Vuhledar. It is impossible! And some believe that we should agree on everything. People sit and wait! We bring food and water, and they keep waiting for the occupiers.”

The town has been shelled for a long time, but more than a thousand people still live there. The administration has no illusions about evacuating everyone, so as a result, there are more global problems.

“People hardly leave. At most, 10 people were recently evacuated,” Maksym Verbovskyi says. “The main problem for us all is how these people will spend the winter.”

Vuhledar MCA assumes that before it becomes cold, 300 people at most will leave the town.

“We hope they will leave. And another 1,000 will stay in town, and we don’t know how they will survive the winter. Now it is still possible to drive into town by country roads, but, for example, after rain, we can no longer get there,” Verbovskyi explains. “And if there are wounded, we cannot evacuate them. And in winter it will be even worse.”

This situation has developed due to the lack of information. People in Vuhledar have no communication and do not know what is happening in the country. The MCA wants to create an information sheet to keep the townspeople informed.

“The town council makes many correct decisions. It is the deputies who decide what is necessary and what is not. While in the MCA, decisions are made only by its head, and the responsibility rests only with him,” Verbovskyi adds and emphasizes that they are now cooperating side by side with the district council. Maksym Verbovskyi believes that the district council is the controller and first assistant of the MCA.

Together with the district council, they solve the most important wartime issues: delivery of humanitarian goods, evacuation and accommodation of people in safe places, and many other unpredictable issues.

Maksym Verbovskyi is impressed by the actions of the Ukrainian military. He is convinced that but for the presence of the Armed Forces of Ukraine in the town, it would have already been occupied. However, Vuhledar holds on from the very beginning. After four months of occupation, the AFU managed to de-occupy Pavlivka, which is three kilometers away from Vuhledar. This made it possible to deliver humanitarian aid and evacuate more than 100 people.

“When the boys were in the city, they said they would stand to the last and not retreat a single step,” the man says. “I am sure that it will be so, and the Russian occupiers will not be able to raise their flag in Vuhledar.”

War unites. In the darkest times, Ukrainians helped each other, regardless of political positions. They helped bury the loved ones, dig out the wounded from the rubble, etc. But there are names that will be added to the history of the town. According to Verbovskyi, these people deserve a monument. For example, the act of nurse Yulia Kolobova. On April 6, Russia’s rocket artillery shelled a school in Vuhledar where humanitarian aid was distributed. Yulia was not afraid and came to help. She stayed in the town until the last to help the wounded and provide at least some help to the townspeople.

On June 28, 2022, on the occasion of the Constitution Day of Ukraine, Maksym Verbovskyi was awarded the “Badge of Honor” for the conscientious performance of official duties, a significant personal contribution to the creation of safe conditions for the life of the Vuhledar territorial community during active hostilities.

His main goal is to return home and rebuild Vuhledar. He says that people still want to return to their homes despite the danger, but the situation is not so simple and unambiguous, and will remain the same even after the victory.

“Not everything depends on people; a lot depends on the state as well. There are now two flooded mines in our town. Will they be able to work? 70% out of a total population of 15,000 are miners. If there are no mines, then what?” Maksym Verbovskyi says. “Young people will not return, I think. But everything depends on the conditions provided by the state. If at least one mine is restored, about 4,000 people will come back, because they will be sure that they are needed.”

Under favorable conditions, 70% of the population will return, the deputy head of the Vuhledar MCA believes:

“Our people are hardworking. Many will return to rebuild the town of their childhood.”