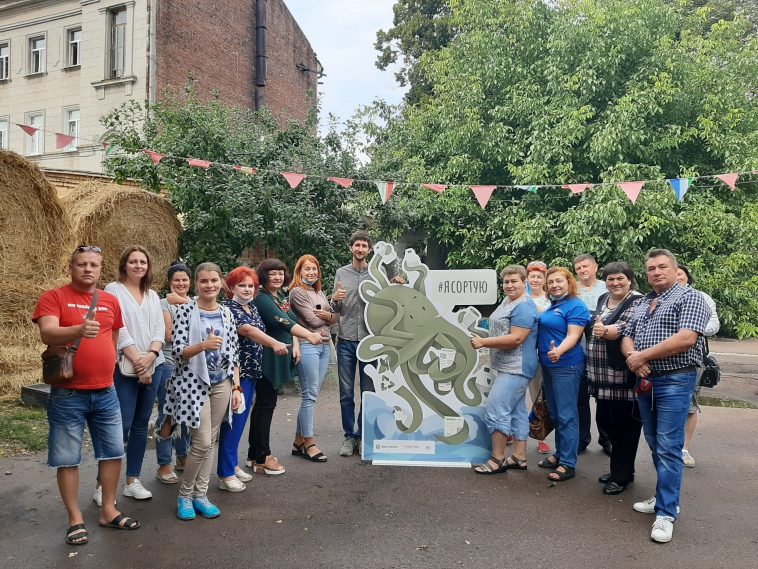 On September 3-5, a press tour to Chernihiv region took place, which was attended by media representatives from Donetsk, Luhansk and Zaporizhia regions. The purpose of the visit was to acquaint the media of the eastern regions and their readers with interesting public initiatives, successes and achievements of reforms and cultural, historical and tourist potential of Chernihiv region.

Thus, the participants of the event visited the National Historical and Cultural Reserve “Hetman’s Capital” in Baturyn. Journalists visited the restored part of the Baturyn Fortress, the hetman’s house and the palace of the last hetman of Ukraine Kirill Rozumovsky on the territory of the reserve.

In Chernihiv, the program began with a visit to the Center for Entrepreneurship, Innovation and Startups in Chernihiv region, which houses a business accelerator, an IT school with Swedish partners, various events that promote entrepreneurship, startups and innovation.

During a collective interview, Vitaliy Zahainy, First Deputy Head of the Chernihiv Regional State Administration, noted that today the Chernihiv region has a very strong potential in terms of economic and tourism development. The formation of the primary level of government is being completed in the region, new initiatives and reforms for recreational development are appearing in the regional state administration, and many new tourist locations are already available to tourists. New projects are being developed that can become a “growth point” for individual settlements in the region and the whole region. Unique tourist routes and objects can be of interest not only to residents of the region or other regions, but also to foreign guests.

Pavlo Veselov, Deputy Director of the Department of Culture and Tourism, Nationalities and Religions of the Regional State Administration, presented the tourist potential of the region separately. According to him, Chernihiv region is one of the leading places in Ukraine in the number of cultural heritage sites. There are about 9 thousand of them, of which almost 2 thousand are of national importance.

Activists of the NGO “Eco City”, which created and launched the first educational waste sorting station in Chernihiv, told the participants about the activities of the organization and showed the sorting station. More than 20 types of secondary raw materials are accepted here, which are then sent for processing to Kyiv.

The participants of the press tour talked to Yulia Darnytska, a local businesswoman, the founder of the Chaikhan Kover institution, about the peculiarities of doing business in Chernihiv and the idea of creating an unusual institution for the city. Yaroslav Sukhomlin, director of the Chernihiv Media Group and one of the initiators of the Green Stage festival, spoke about the idea of developing the city’s creative environment and the mission of the Green Stage cultural and social project, which is to create an open creative space in Chernihiv for free present their work to a large number of spectators and listeners, for the exchange of ideas, inspiration, for live communication.

In addition, in Chernihiv, journalists met with Anna Halperina, the initiator of the OpemHeartMarket charity project, and met with local journalists at the Desnianska Pravda press center.

Finally, the participants of the press tour visited the Beremytske Nature Park, a nature protection facility that was opened to visitors on October 13, 2017. The main activity of the park is related to the restoration of ecosystems in Podesinye through the introduction of revailing methods to create mosaic landscapes, including through natural grazing.

The press tour was part of the Contemporary Regional Media Project – a pledge of quality in a media-competent democratic Ukraine, which is being implemented by the Ukraine Crisis Media Center with the financial support of the Norwegian Ministry of Foreign Affairs represented by the Norwegian Embassy in Kiev.