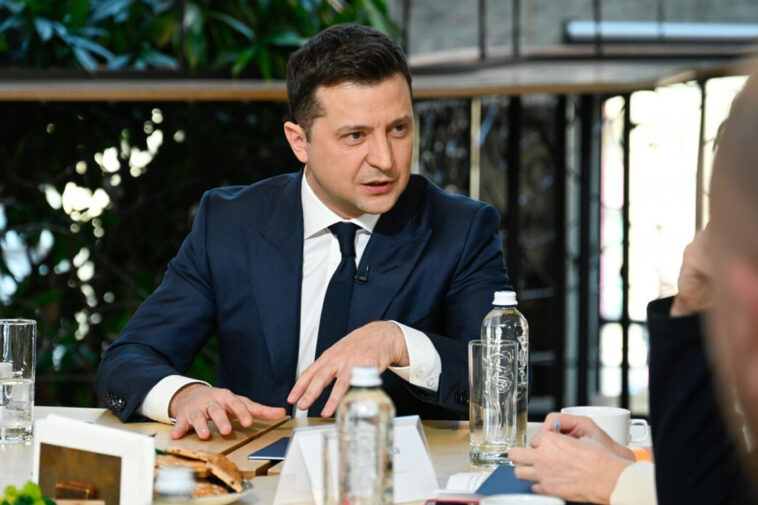 On November 26, President Volodymyr Zelenskyi held a news conference to mark the midterm of his presidency. Answering journalists’ questions, Zelenskyi made a few serious and sensational statements. He said a coup is being plotted in the country. He commented on the Wagnergate scandal for the first time. The President provided details of the buildup of Russian troops near Ukraine border. Here’s what’s key.

A coup d’état is possibly plotted in Ukraine, one of President Zelenskyi’s most sensational statements during the press conference says. Rinat Akhmetov, the country’s richest person is being dragged into the plot. Akhmetov’s inner circle pushes for a coup against the nation and the President. The oligarch is already waging an information war, Zelenskyi said.

“We received reports that on December 1 or December 2, a coup will be staged in the country. These are not just intelligence reports. There are also audio recordings of talks between Ukrainian and Russian nationals on Rinat Akhmetov’s role in a coup d’état in Ukraine. One billion U.S. dollars is made ready.”

“That’s a trap, an insult of Akhmetov. He is being dragged into a war against the state of Ukraine. He started the war. Fighting against his own nation and the President they elected will be his biggest mistake. His inner circle drags him into the war.”

“I have no worries about that. He can be in the dark or fully aware about that. I invite Rinat Akhmetov on Bankova to listen to the recordings that can be shared, or to respective agencies.”

There was a series of questions on the failed operation to capture the mercenaries of the Russian private military contractor Wagner. An investigation by Bellingcat suggests that the delay resulted in failure of the operation.

The President made two key points. He explained why he did not trust the former military intelligence chief Vasyl Burba. He also gave details why he ordered to cancel the operation.

The former head of the Main Intelligence Directorate of the Ministry of Defense Vasyl Burba is a person of the former President Petro Poroshenko, an “adventurer and scammer” who sought to discredit Zelenskyi.

“He’s an adventurer and scammer. I never wanted to say that, but now that he’s fired. A petty man who renovates his house in Koncha (referring to Koncha Zaspa, expensive suburbs of Kyiv, a place to live for many government officials – edit.) for 11 million, a security service agent who blocked everything offers me Covid.”

Burba was an ill-suited intelligence chief because of his bad reputation and links to the Security Service, Zelenskyi said. He previously served with the security service and was involved in dispersal of Maidan, the President said.

After the revolution, Poroshenko kept Burba and appointed him to intelligence, although Burba did not have prior experience with intelligence, Zelenskyi said.

Burba’s alleged involvement in Maidan dispersal was clear from security service plans earlier released by Hennadiy Moskal. They are part of the investigation dossier on Maidan killings. Burba is not a suspect in the case.

A conversation with the then intelligence chief convinced Zelenskyi not to sanction the operation to capture Wagner mercenaries, the President said.

“Mister Burba came to me and presented his plan. I had a question and so I asked directly: Turkish Airlines, does Erdogan need to know? – No. – That’s clear.”

“I do not believe that it was our operation, I have a feeling that we were dragged into it. I said: I want to know, a Turkish Airlines flight leaving Minsk, there will be common people on board, Turkish nationals and not only, more than 100 people. You suggest that we land the plane in Ukraine, but what if the mercenaries highjack the plane, is that possible? Yes. Is it also possible that they will highjack the plane and all the people would die? Even better: we’ll blame it on the others (Burba’s alleged answer).”

“I said that it was not our operation, it is not well-planned. I am ready to sanction any operation, even this one, if it is carefully planned and people are safe.”

When Burba left his Office, Zelenskyi said that Burba wants to put him at odds with the Turkish President Erdogan, after what happened with the U.S., and drag Ukraine into a big scandal with Turkey.

“Erdogan would have never forgiven us. I discuss things with him behind closed doors. He helps us a lot. I would never hit that wall. That’s why I say: we did not hold the operation, we were dragged in.”

Buildup of Russian troops: escalation possible, tensions not worse than in spring

“The situation is not worse than in spring,” Zelenskyi said. Ukraine’s intelligence records rotations of Russian troops that move “to create a more massive look on satellite images.”

Russia steps up aggressive rhetoric, and probability of the attack rises. “Rhetoric is also very dangerous. (Russia) repeatedly says that NATO troops are deployed in Ukraine. That’s what works for Russia’s domestic audience. I fully agree with the U.S. that it is a very dangerous story,” Zelenskyi said.

“Second is Russia’s information attack, they say Ukraine derails Minsk (agreements). Minsk is what once stopped the escalation. That’s a signal of possible escalation.”

“The third signal is Nord Stream 2, Belarus and migrants on the EU borders. Problems extend beyond Ukraine. There are energy problems, and border security problems. Problems build up and need to be solved. Security is bargained through solution of other problems. (Russia) plays the card to secure victory.”

The fourth’s point that Russia emphasized in the past weeks is Ukraine seeking escalation. “Ukrainians do not want peace, and Ukraine begins escalation, Russia says. They search for justification,” Zelenskyi said. “Ukraine has never attacked Russia, that was never on our mind. The contact line is not in Russia. It separates government-controlled area from temporarily occupied Ukrainian territory,” he added.

“In parallel, we look forward to talks between the U.S. and Russia. No decisions on Ukraine are made without Ukraine, but one of the issues on the agenda will be Ukraine.”

“Chiefs of presidential administration Yermak and Kozak need to engage in a dialogue. Our people and Europe need to see that we talk to each other, and there will be no full-scale escalation. There will be meetings or calls shortly.”