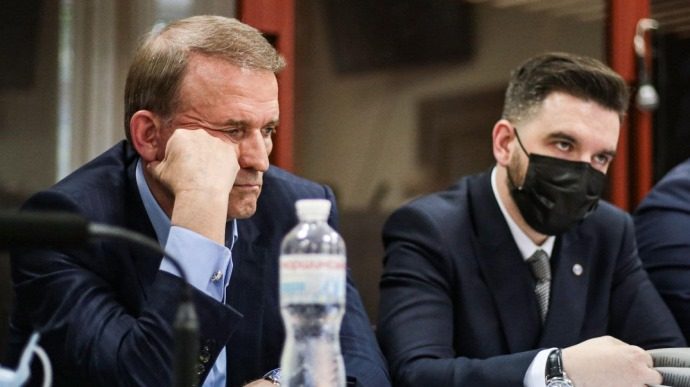 On May 11, the Prosecutor General of Ukraine Iryna Venediktova signed an indictment for treason and attempted theft of government property in Crimea against Viktor Medvedchuk, Putin’s crony and a leader of the “Opposition Platform – For Life” party, and Taras Kozak, MP of the same party. Also, the Security Service searched the party’s office and Medvedchuk’s two houses. These developments have sparked an uproar in Ukraine this week. On May 13, the court ordered Medvedchuk into house arrest during the pre-trial investigation. Are these charges linked to the sanctions on Medvedchuk that the National Security and Defense Council imposed earlier this year? What are the views of the general public? We take a closer look at the story.

Who is Medvedchuk? Viktor Medvedchuk is often called an éminence grise in Ukrainian politics, he is one of the country’s pro-Russian leaders. High-level official in past administrations, Medvedchuk also chaired the executive office of the President under Leonid Kuchma’s administration. He started his career in Soviet times as an attorney. In 1980, he served as a public defender provided by the government to represent Ukrainian writer and dissident Vasyl Stus. While Stus denied his guilt, Medvedchuk conceded his client guilty, a move seen by many as a violation of the lawyer’s ethics.

In the first decade of Ukraine’s independence, Viktor Medvedchuk chaired the Social Democratic Party of Ukraine (united), and later an organization called “The Ukrainian Choice”. In 2019, he became the chief of the political and strategic committee of the “Opposition Platform – For Life” (Opozytsiyna Platforma – Za Zhyttia, OPZZh) party that holds the second-largest faction in the Parliament, outnumbered only by the majority party “Servant of the People” (Sluha Narodu). Medvedchuk has a special relationship with Putin, who is the godfather of Medvedchuk’s daughter.

Medvedchuk is often considered a mediator between the government in Kyiv and the Kremlin chief. He has facilitated prisoner swaps between Russia (the militants it backs) and Ukraine a number of times, during the presidency of Petro Poroshenko.

Sanctions by National Security and Defense Council. Sanctions imposed by the National Security and Defense Council are seen as President Zelenskyi’s first move illustrative of his stance toward Medvedchuk. In February 2021, the Council sanctioned Medvedchuk’s ally Taras Kozak, and thus shut down three pro-Russian TV channels he owns. Later, President Zelenskyi set in motion the sanctions against Medvedchuk and his business of transportation of petroleum products on charges of terrorism financing.

What are the latest charges against Medvedchuk? The latest charges are not linked to the recent sanctions. Medvedchuk is suspected of plotting oil and gas extraction with Russia in the Black Sea. Also, in 2020, he passed to Russia the location details of a secret Ukrainian Armed Forces unit through Kozak.

Late in the evening of May 11, Medvedchuk’s press service issued a statement on the searches and the indictment. The politician will not be hiding from justice and is in Ukraine, the statement reads. On May 12, Medvedchuk arrived at the Office of the Prosecutor General. On May 13, he showed up in court. The Pechersk district court of Kyiv ordered Putin’s crony into 24-hour house arrest.

The court rejected the prosecutors’ request for pre-trial detention with a UAH 300-million bail. He was put under house arrest until July 9, 2021. The court ordered Medvedchuk to surrender his foreign passports and wear an electronic monitoring device.

The defense asked not to impose any pre-trial measure on the defendant. Besides, Medvedchuk’s fellow MPs of the OPZZh party offered themselves as guarantors for the release on bail. Commenting on the court order, Medvedchuk said he will work and give interviews from home.

Reaction of the political forces and general public. Public reaction to Medvedchuk’s pretrial house arrest was mild. A majority of politicians, including opposition, and experts agree that the pretrial measure is too soft.

It is too soft for treason charges, the public sentiment is. Denys Kazanskyi, journalist, member of the Ukrainian delegation to the Trilateral Contact Group in Minsk, asks a rhetorical question: “Why do the cases involving treason, and flares and broken windows at the Office of the President share the same pretrial measure?”

Journalist Bohdan Butkevych says the court decision was predictable, and warns against giving up in despair.

He says Medvedchuk “was assigned the role of an oligarch whom Zelenskyi will publicly defeat.” He will not flee to Russia, Butkevych adds: “He understands that his value is high as long as he is in Ukraine. In Russia, he would be even less valuable than Yanukovych.”

Medvedchuk’s “de-legitimation” is a positive outcome already, the journalist says. “It paves the way for de-legitimation of the openly pro-Russian breed in Ukraine.”

How will it unfold? Experts are divided over the case prospects. Some say the case has no prospects and will not advance in court. Others complement the solid stance of the government, and are hopeful of Medvedchuk’s guilty verdict.

Indictment against Medvedchuk, and searches in his party’s office and in his house result from Washington’s pressure on Ukraine to eradicate corruption, diminish oligarch’s power, and unarm Russia’s agents in the country, political and social sciences expert Viktor Nebozhenko told DW in an interview. That demand put Kyiv in a “situation that outweighs the intellectual capacities of the Ukrainian government.” “That’s a task that the actual president will not be able to accomplish,” the expert says. According to Nebozhenko, Medvedchuk’s case will get stuck in court and will not get into the final phase. “The Security Service and the Office of Prosecutor General have already done everything possible. While in Ukraine, a court of no instance is ready to fight against Medvedchuk,” the expert continued.

Political expert Volodymyr Fesenko sees the prospects as dynamic and inevitable for the suspect, following the pressure mounting in the past three months. “Two factors are in play. On one hand, there is the president’s political will and interest, as Medvedchuk has become his personal political foe. On other hand, his political will is shared by law enforcement following a wide public approval of the sanctions imposed by the National Security and Defense Council on Medvedchuk,” Fesenko said.

He finds the competition between the law enforcement and the president beneficial for Ukraine’s national interest, as the Medvedchuk case is about national security. Fesenko projects further pressure from Zelenskyi and the civil society to bring the case to the sentencing phase.

“In the coming years, Medvedchuk will not have political future. Instead, he will need to defend himself and hide. Excluded from the political process, once the key pro-Russian figure, he will get weaker. Medvedchuk’s partners will have to distance themselves from him, and create other political forces,” Fesenko added.