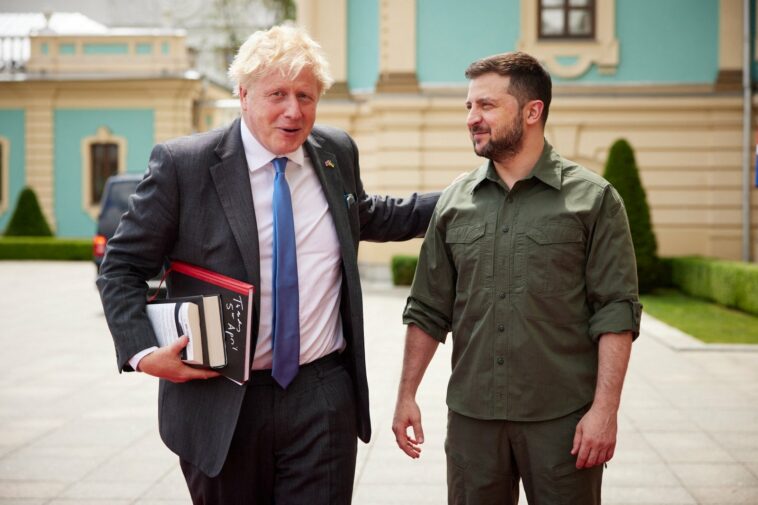 Boris Johnson returns to Kyiv on surprise visit. British Prime Minister Boris Johnson made a second unannounced visit to Ukraine since the invasion. On Friday, President Zelenskyi, his office, and the government met with Johnson to discuss supplies of heavy weapons and air defense systems, economic support to Ukraine, more sanctions pressure on Russia, and security guarantees. Johnson said he understands why the people of Ukraine can make no compromise with Putin. Johnson promised that the UK will give Ukraine “strategic endurance”, strengthen a world diplomatic coalition to support the country, and will work to reinforce sanctions against Putin’s regime.

The UK is ready to continue to send weapons to Ukraine, and train the military to use them.

Ukraine strikes Russia’s military tugboat near Zmiyinyi Island. On the morning of June 17, the Navy of the Armed Forces of Ukraine said it hit Russian tugboat Vasiliy Bekh as it headed to Zmiyinyi Island. The tugboat carried ammunition, weapons, and personnel of Russia’s Black Sea Fleet to the island.

Despite the vessel had a TOR missile system installed on board, the Ukrainian Navy conducted a precision strike against the tugboat turning it into “fire that floats on water”.

The strike hit up to 70 per cent of the ship’s crew, and the fate of others remains unknown, Ukraine’s Operational Command Pivden (South) said quoting preliminary reports.

As of midday June 17, more Russian vessels conducted search and rescue operation near the strike site. Ukrainian defense officials did not specify what kind of weapons were used against the boat Vasiliy Bekh. Head of the Odesa regional military administration Maksym Marchenko earlier said those were the Harpoon anti-ship missiles. He later edited his Telegram post to delete a reference to the type of weapons.

Earlier, the U.S. and Denmark pledged to send Harpoon anti-ship missiles to Ukraine.

Ukraine in Flames #99: Kharkiv live from the frontlines of the Russian war. Part 2

Ukraine In Flames #99 offers more dispatches from the Kharkiv region, where active combat is taking place, some villages are suffering from the Russian occupation and Kharkiv itself is constantly shelled. Meet Ukrainian journalists, activists and representatives of the local governments from the region that has been heavily hit by the Russian invasion and find out what they have gone through and how they are dealing.