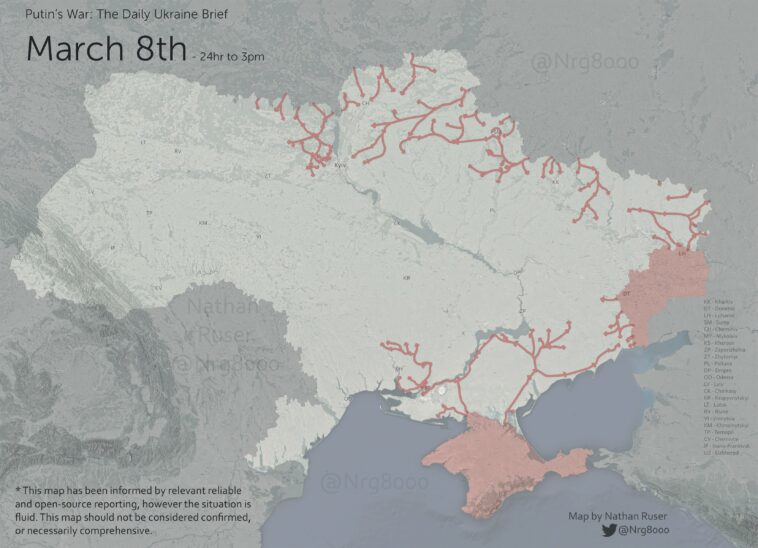 Russia continues to attack civilians. The Russian army bombed Sumy. 500-kilogram bombs were dropped on houses on Romenska Street and Spartak Street. According to the Sumy Regional Prosecutor’s Office, the victims of the air strike were 21 people, including 2 children.

Russia’s offensive stalled: a military expert. An Austrian military expert gives an optimistic assessment of the military situation. “Overall, unless one of Keystone Cops (command of the Russian army – Editor’s Note) finds an equivalent of division of the RFA and then some way to destroy one of major Ukrainian Army units – no matter where along this frontline [previously the author wrote that the Russian army has not yet managed to defeat any of the major Ukrainian units – Editor’s Note– I currently do not see how do the Russians want to make any major achievements in this war. All their available forces are engaged: there’s no reserve left. Moreover, the Ukrainians have the advantage of the ‘inner line’: their communications are much shorter, while the Russians have to ‘dance’ long ways around them, and that along an insufficient road network largely running in east-west, not in north-south direction.

Sure, restoring order in the 41st CAA might help the West OSK to ‘find’ additional forces, but that’s going to take days. At the cost of ignoring large pockets of Ukrainian forces in the rear, perhaps even constructing several new roads around these, this might bring them into eastern Kyiv, but the defences there are meanwhile really well-prepared. And what then….?

Belief in victory: 78% of Ukrainians. In Ukraine, 78% of the adult population (over the age of 18) believes in Ukraine’s victory in the war with Russia, started by the Kremlin regime. 19.5% of Ukrainians do not believe, 2.7% could not answer.

This is evidenced by a study conducted by the Institute of Cognitive Modeling, the Center for Social Monitoring and the First Rating System.

The level of trust in President Volodymyr Zelenskyy has also grown significantly: 75.1% of Ukrainians trust him, 16.6% do not trust him, and 8.4% could not answer.

Support for the president’s actions reached almost 80%. In addition, the majority of respondents – 75.3% have already helped the Armed Forces, territorial defense fighters or volunteers in the last week.

Thirteen days of this struggle. On the first day, at four o clock in the morning we were attacked by cruise missiles. Everybody woke up – adults and children, the whole Ukraine. From that moment on, we have not been sleeping, we all have been fighting for our country, together with our army.

More than 50 children have been killed in 13 days of hostilities. These children could have lived, but the occupiers took their lives.

We are the country that is saving its people despite having to fight one of the biggest armies in the world.

‘To be or not to be?’ – You know this Shakespearean question well. Thirteen days ago this question could have been asked about Ukraine, but now, absolutely not. It’s definitely yes, to be. It is obvious, we will be free.

And I want to add my own comment: we will fight on the terricones, on the banks of the Kalmius and Dnieper rivers!”