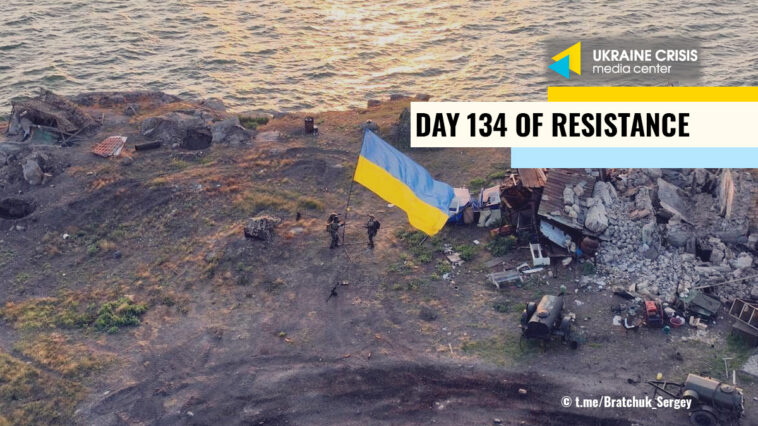 Ukrainian Navy’s Special Operations Forces shared details of their landing on the island. On the night of July 6 into July 7, combat swimmers of the 73rd Antin Holovatyi Naval Special Operations Center neared Zmiinyi Island in underwater vehicles. They surveyed the coastal area, looking for naval and anti-landing mines.

After installing a passage for the main group’s boats, they sent a signal to continue operation. The engineers descended on the island first. They cleared a passage of mine and traps for the rest of the force.

As they reached the island’s plateau, the group examined the area, and took stock of the weapons and materiel that the Russian forces brought to the island.

“While our soldiers were doing their tasks, Russian ships began maneuvering in the direction of Zmiinyi Island. After completing the task, the combined forces group left the island. Russians then conducted a missile strike against the island and hit a pier. The entire group of Ukrainian servicemen returned unscathed to the base,” a statement by the Special Operations Forces reads.

Following massive missile and artillery strikes by the Ukrainian Armed Forces on June 30, the Russian occupying forces hastily evacuated remaining garrison from Zmiiny Island in two boats. Russia’s Defense Ministry said the retreat from the island was a “gesture of goodwill”.

The UK Defence Ministry disproved the claim. The Ukrainians were very successful at applying significant pressure on the Russians on Zmiinyi, the U.S. Department of Defense said. Russian forces lost nearly USD one billion worth of equipment in the attacks on the island, Forbes said.

A Russian missile strike on Kramatorsk killed one, and wounded six others, head of the Donetsk regional military administration Pavlo Kyrylenko said on Telegram. The casualty report is not final, he added. Six buildings, including a hotel and a residential multi-story building were damaged.

In Kharkiv, at least three people were killed and five more were wounded as Russia struck one of the city’s districts. Serhiy Bolvinov, head of the investigation department of the National Police in Kharkiv region said Kharkiv was shelled using Uragan multiple launch rocket systems and high-explosive shells.

Russia’s attempted offensive on Slovyansk has no success

On the Slovyansk axis, the Russian forces stormed Bohorodychne trying to fully seize it, but had no success. The Ukrainian troops firmly repelled the attempted attack.

In times of war, the medical profession becomes especially dangerous and challenging – and therefore, even more important – especially when it comes to maternity hospitals. Watch Ukraine in Flames #119 to learn how Ukrainian doctors and nurses remain unbreakable despite the personnel problems, current shellings, and airstrikes, helping the light to win over darkness.