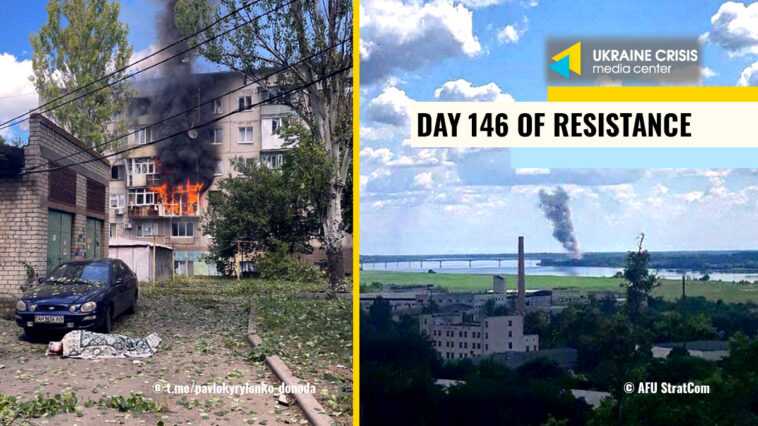 On the morning of July 19, a Ukrainian missile hit an area near the Antonivskyi bridge in occupied Kherson. Photos and videos posted to social media showed explosions.

Local Telegram channels reported a fire on a site near the bridge where Russian forces stationed their weapons and equipment. Advisor to the head of the Kherson regional military administration Serhiy Khlan confirmed that the Ukrainian Armed Forces struck a base of Russian troops near the Antonivskyi bridge.

“[The Ukrainian Armed Forces] conducted a precision strike near the Antonivskyi bridge, between the bridges across the Dnipro and Konka, close to Nairi café and a bus station. That is a site where the Russians built solid fortifications, stationed a lot of weapons, deployed a military unit that guarded [the bridge], and installed a checkpoint between the two bridges. There was a massive explosion, and smoke is rising. [The Ukrainian troops] precisely hit Russia’s military deployment near the Antonivskyi bridge,” Serhiy Khlan said on television.

A strategic bridge in Kherson was damaged, yet it remained operational, deputy head of the Kherson regional military administration Yuriy Sobolevskyi said on Telegram.

The Antonivskyi bridge across the Dnipro connects occupied Kherson with the eastern part of the region that is also controlled by the Russians. Russia uses the route to supply weapons and ammunition from occupied Crimea.

At least one person was killed as Russia conducted a missile strike on the center of Kramatorsk, mayor of Kramatorsk Oleksandr Honcharenko and head of the Donetsk regional military administration Pavlo Kyrylenko said.

Ukraine is preparing to destroy the Russian navy’s Black Sea fleet and is waiting to receive longer-range weapons before launching an assault, Ukraine’s Deputy Defense Minister Volodymyr Havrylov said in an interview with The Times published on July 19.

There is a permanent threat from the Russian Black Sea fleet, Havrylov said. The Ukrainian troops will inevitably target the fleet to guarantee security to Ukrainians. They started with the operation on the Zmiinyi Island. “Sooner or later we will have enough resources to target Russia in the Black Sea and Crimea. Crimea is Ukrainian territory, that’s why any target there is legitimate for us,” Havrylov said during a visit to the UK where he is observing Ukrainian troops in training.

Ukraine also plans to take back Crimea, Havrylov stated. He said it could be taken back via diplomatic or military means. Russia will have to leave Crimea if they wish to exist as a country, Ukraine’s Deputy Defense Minister said.

Russia is dealing with severe under-manning, UK Defense Intelligence said in a regular update posted to Twitter. “Russia continues to commit what are nominally six separate armies to its Donbas offensive. At full strength, before the invasion, these formations were established for around 150,000 personnel.”

“Russia has struggled to sustain effective offensive combat power since the start of the invasion and this problem is likely becoming increasingly acute,” the message reads.

“As well as dealing with severe under-manning, Russian planners face a dilemma between deploying reserves to the Donbas or defending against Ukrainian counterattacks in the southwestern Kherson sector.”

Decolonization of memory: cases of Ukraine and Moldova. Ukraine in Flames #131

Ukraine and Moldova not only share a similar history as having been under Soviet occupation and their sovereignty being violated by modern Russia. They also have common values and aspirations of Euroatlantic integration, as part of which declassifying archives of the Soviet repressive machine is indispensable. Watch experts discuss decommunization, decolonization, and access to archives of repressive bodies in the two countries as part of a discussion hosted by UCMC’s press center in Ukraine In Flames #131.