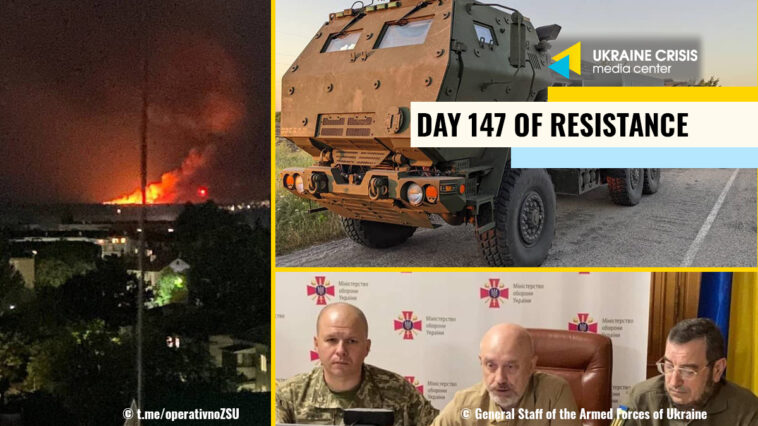 On the morning of July 20, Russia conducted another artillery strike on Kharkiv. Three people were killed, including a 13-year-old boy. A 72-year-old woman was wounded.

The Russian forces fired Uragan multiple launch rocket systems at the city, mayor of Kharkiv Ihor Terekhov said. A mosque in the Kyivskyi district was damaged. A 15-year-old girl, a sister of the killed boy, was wounded, he added.

The Ukraine Defense Contact Group met for the fourth time. More than 50 nations participated virtually in the meeting. The contact group first met at the Ramstein Air Base in Germany in spring 2022, at the joint initiative of the U.S. and Ukraine. The third meeting took place in Brussels on June 15.

Ahead of the fourth meeting, Ukraine’s Minister of Defense Oleksiy Reznikov, and the U.S. Secretary of Defense Lloyd Austin held talks. Reznikov said “very good news on assistance to Ukraine” came as a result of the conversation. The next package of weapons for Ukraine will include four more HIMARS advanced rocket systems, Austin said. They will bring the total number of the systems committed to Ukraine to 16. Lithuania will transfer armored personal carriers M113 and M577 to Ukraine, Lithuania’s Defense Ministry said.

In his opening remarks, the U.S. Secretary of Defense mentioned long-range weapons that Ukraine gets from partners. The U.S. and other countries will continue to increase their military assistance to Ukraine, Austin said. “The U.K.’s M270 MLRS systems are now in the fight, and Germany’s systems will soon be on the battlefield as well. Poland has also recently transferred three battalions of 155-millimeter self-propelled howitzers to Ukraine, which are already making a difference on the front lines,” he added.

The EU Ambassadors have agreed on the seventh package of sanctions against Russia, Lithuania’s Permanent Representative to the EU Arnoldas Pranckevičius twitted on Wednesday.

The sanctions will include a ban on exports of gold, new export controls, a freeze of Sberbank’s assets, and will be imposed on more than 50 new individuals and entities, including politicians, military leaders, oligarchs, and propagandists, Pranckevičius said.

“The Ukrainian Armed Forces fire on the Antonivskyi bridge for the second day in a row. (…) That is the only highway that connects the two banks of Dnipro – Kherson with the mainland. [The Ukrainian troops] also fire HIMARS rockets on the Kakhovska hydroelectric power plant that is 100 kilometers away from here,” Litomin said. As the damaged bridge will be repaired, the traffic along the bridge will be limited, said Volodymyr Saldo, Russian-installed head of occupied Kherson region. Today, the Ukrainian troops also struck a Russian 48Ya6-К1 radar system Podlet in Lazurne, Kherson region.

Even war has rules: Russia’s war crimes in Ukraine. Ukraine in Flames #132

While the Russian army does not progress in Ukraine and the goals of Russian “special military operation” are constantly changing, the occupiers compensate for the lack of military success with war crimes, which is a blatant violation of all existing rules and laws of war.

Kremlin propaganda is systematically gaslighting Ukraine, blaming it for the food crisis at the exact same time when Russians steal Ukrainian grain and burn everything they cannot steal, when they kill civilians, rape, torture, and take hostages. Terror and intimidation of the civilian population is so far the biggest achievement of the “liberation army”.

However, all Russian war crimes are now being tracked, documented, and verified to be later used as evidence during the international tribunal. Other countries and international organizations also monitor these crimes and even create special units for investigation. Every Russian criminal will be held accountable, and the evil will eventually be punished.

Russian war crimes in Ukraine are full of brutality and dehumanization proving the genocidal intentions of the Kremlin. Both brutal and not subject to common sense, these crimes are being carefully monitored and documented for further investigations and international tribunal. Watch Ukraine in Flames #132 to learn the role of the global community in tracking Russian war criminals and how they will be held accountable.